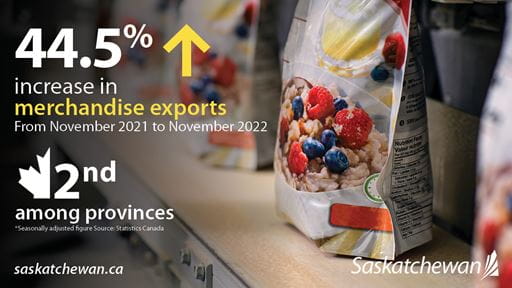 In November 2022 the province’s unemployment rate fell to 4.2 per cent, the second lowest among provinces, and well below the national average of 5.1 per cent (seasonally adjusted).

“We have a secure and stable supply chain in Saskatchewan, providing the food, fuel, fertilizer and critical minerals that a growing world needs,” Trade and Export Development Minister Jeremy Harrison said. “Our government remains committed to supporting and expanding our export sectors in order to create jobs, generate wealth and attract investment to our province.”

In the first eleven months of 2022, merchandise exports in Saskatchewan increased by 43.5 per cent, compared to the same period in 2021. Saskatchewan ranked second among the provinces in percentage change.

Aircraft and other transportation equipment and parts and metal and non-metallic minerals lead the year-over-year export growth, with increases of 237.6 per cent and 87.8 per cent respectively.