Sept. 27, 2016 - In addition to all the hard data we asked Canadian loggers for in the CFI 2016 Contractor Survey, we gave them the opportunity to add their own voice. Here’s a sampling of what they had to say. You will see common threads around financial rewards, mill-logger relationships, and frustration.

“By the time you figure out how to get ahead in this game, the game changes.”

“The relationship between contractors and major licensees seems to be one of confrontation and disrespect. I am not sure how we got to this point, but it has poisoned the work environment right down to the equipment operator level.”

“Mental health is an issue that needs more attention.”

“The industry needs to provide steady employment and security to compete with other industries – there is no new blood coming into the industry, as capital costs are high, as well as the risks.”

“It is well past time that the licensee-contractor relationship returned to a partnership rather than an adversarial nature. Respect for good work has gone – cheaper is what counts. The effort to look after the timber like it is your own seems to go unnoticed.”

“Decisions are often made by government that have major impacts on our small businesses but without our input or any apparent consideration. The large companies are heard, but the contractors are not.”

“In Alberta the consolidation of fibre supply around a few mills has removed any real competition.”

“The adversarial relationship between contractors and licensees is a major distraction for both parties. It is preventing both from collectively working on improving efficiencies in the supply chain. Failure to change this will continue the trend of the coastal forest industry becoming increasingly uncompetitive in the global market.”

“I would like to see more common sense and practicality when coming up with work safety regulations. There are too many changes without input from those people doing the work.”

“Expenses keep going up, but the price we get for our wood is stagnant.”

“Part of my profit comes from outside the forest sector, and therefor gives a small imbalance. The realistic profit from my forestry work is 2 to 3% in a good year.”

“It is absolutely critical to improve the image of our industry among the general population, and that includes potential workers.”

“The relationship between the logging contractor workforce and the sawmills needs to improve. This appears to be an issue across the board in BC. All the mills are squeezing the contractor force too tight, they need to loosen the grip and allow contractors some breathing room and financial reward.”

“The bottom line is that contractor profits are completely dictated by the sawmills. It has been the same problem in this industry for 40 years. Mills want to transfer all the risk to the contractor, but still dictate the profits they can make. We are no longer independent contractors.”

“Major licensees in BC were in real financial distress 5 to 10 years ago. They asked contractors for help by holding rates and being more flexible with working conditions. Today they are much healthier financially, but the system has not improved to reflect that. Rates are still too low and small, short-term contracts allow for no stability or investment.”

“A major issue is how the forest is managed locally, and a lack of response for questions in the woods, like water crossings, block issues, and road concerns. That, and a lack of competition for fibre means we have to accept a take-it-or-leave-it price from the mill, with no thought to poor wood quality, slow cycle times for trucks, or poor roadbuilding conditions.”

“Major licensees seem oblivious to the fact that their contractor force is aging and many are considering liquidation as the only practical exit strategy.”

“Mills now require financials from their loggers. How is that an independent contractor?”

“The cost of safety has gone through the roof. With more than one safety entity over-seeing our industry, the time taken for safety audits and supervision is a make or break for a number of small contractors.”

“At this point government policy and the licensee approach needs to be changed to support a financially viable and sustainable contractor sector.”

“Maybe you should have asked ‘Do we think the contractor can survive with such a slim profit margin’? That is the number one concern for contractors around here, and the answer is a resounding no! There is not enough money in the industry for my sons to have stability for any number of years.”

“The consolidation of tenure in Coastal British Columbia is not benefiting the industry’s competitiveness, is hindering investment in secondary manufacturing, does not benefit taxpayers, and is hurting local resource-dependent communities.” 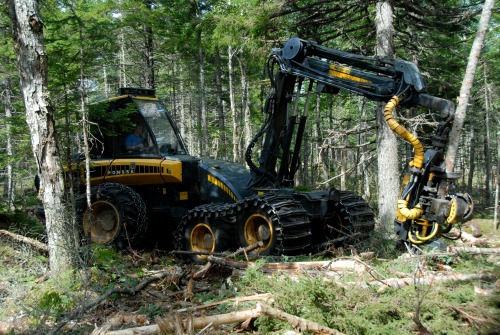