M&K Sawmills may be a small fish in a big pond, but nibbling on a few giants has helped them survive, even through the recent tough times. 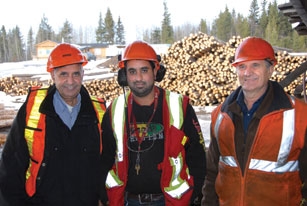 The family-owned M&K sits near the top of a steep hill that leads into the north-central B.C. forest industry town of Quesnel. At the bottom of the hill are large to mega-sized sawmills operated by Tolko, Canfor, and West Fraser. Targeting just 12 million to 15 million bf annually, M&K’s owner Nirmal Lidder and his son Harman have no aspirations or desire to catch up to Quesnel’s super mills in terms of production volume or size. However, they are happy to acquire used equipment from the big mills when they upgrade, something all three of the major producers have done over the past few years.

“That piece over there came from Canfor, while we picked up this piece from Tolko,” says the animated Nirmal as he wanders through the M&K mill site. “We’ve built this mill from equipment all three of the big mills in town were done with,” he notes, while adding that he acquired all of the gear at a very attractive price. He’s also happy to tell you this careful spending is one of the reasons his mill has made it though the most recent recession. “We have only spent capital when we have to and we have minimized our costs every way we can,” he continues. “It’s not been easy, but it has kept us going through the good times and the bad.”

Nirmal came to Canada from the Punjab in India in the early 1950s, following in the footsteps of his father. “Because my Dad was here, I had Canadian citizenship, so I came with the intention of making some money and then returning to India, but that’s not how it turned out,” he explains.

The first stop for Nirmal was Tasis on northern Vancouver Island. That was in 1954. In 1956 he moved to Williams Lake in the B.C. interior and then moved another 120 kilometres north to Quesnel in 1957. That was for a job at Ernst Lumber in Quesnel, which later became the Tolko mill in town. “I installed a chip ’n’ saw at Ernst,” explains Nirmal. “It was the first chip ’n’ Saw in B.C. and I stayed on to operate it for them and ended up being there for a number of  years.”

Being entrepreneurial by nature, Nirmal eventually left his first job at Ernst in 1983 to open his own processing facility, a small part-time mill in a fairly remote location, 20 kilometres west of Quesnel. “That’s where I got my start working with my Dad,” adds Harman. “I remember those days. We were producing railway ties when I was this big,” he says, while holding his hand at chest height.

In 1990, the Lidders brought the mill closer to town, moving it to the current location. “This site provided us with better and more reliable access to power, it’s closer to town when we need parts in the case of a breakdown, and it gives us much better access to transportation for our incoming logs and outgoing finished products,” explains Harman, who now handles most of the day-to-day management  at the mill. “We also wanted to grow the business by adding a debarker and a chipper and the old site was on leased land and we didn’t have that flexibility.”

That was also the time when Nirmal started to acquire bits and pieces of used equipment from the other mills in town. “At that time, the banks wouldn’t look at you for a loan unless you had a forest licence attached to your mill,” Nirmal explains. “That made it tough to expand so we operated lean and with just three guys – one on the saw, one on the edger and one piling lumber, and we put our money into buying used equipment for cash. Almost this entire mill was built that way.” 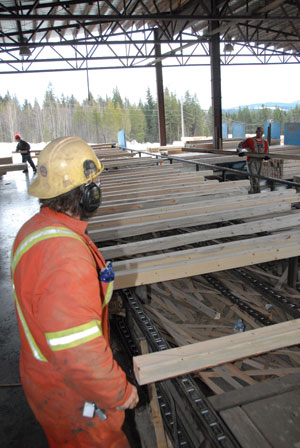 Mill flow today starts in the log yard where an ATL 625 log loader unloads incoming log trucks and places the logs into inventory. A Cat 920 loader then feeds the mill as needed. The first step in the process is a Cambio (now USNR) debarker, which is followed by a Cancar (also now USNR) chip ’n’ saw that was installed in 2005. The chip ’n’ saw, which can handle logs with up to a 5-in. top and a 7 to 8-in. butt, produces cants, or rough 4×4 or 6×6 squares in lengths from 8 ft. to 16 ft. “We have a basic scanner that adjusts the table and cleans up for wane and provides us with the recovery and volume we need,” explains Nirmal.

Chips from the chip ’n’ saw drop to a shaker screen, which separates out chips for West Fraser’s Cariboo Pulp and Paper mill in Quesnel. Any fines go to hog fuel, which is also shipped to Cariboo Pulp and Paper. M&K has three chip bins – two are used for the pulp chips and one is for hog fuel. Transportation to the Cariboo mill is done by Arrow Transport, which has trucks with moving floors. Up to four trucks per day fill up at M&K for a total of about 1,000 bone dry units per month. 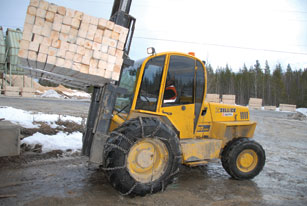 Back on the sawline, the squares or cants fall onto a transport deck that takes them to a green chain where three sawline employees sort the products and get them ready for a Woods planer and trimmer prior to packaging for shipment. One Patrick forklift and two Sellick forklifts with four-wheel drive are used to move the finished packages around the yard and to load outgoing trucks, while a pair of Caterpillar 966 loaders is also used for the heavier work.

Right now, Harman says the mill employs about 20 people and runs one shift, five days per week. That’s enough to reach its annual production target of 12 million to 15 million bf, but he says they could easily double employment numbers and their production volume if they had a guaranteed log supply. “We have to secure our logs on the open market, primarily through small business sales, and that doesn’t give us a guaranteed volume,” Harman explains. “We have an excellent relationship with our customers and we guarantee delivery. The last thing we want to do is tell a customer they will have the product and then not deliver because we can’t get the logs we need. We would much sooner be safe and keep our production targets at a level we know we can attain.”

As for markets, upwards of 75% of the M&K’s production is sold in the domestic market, with the balance, including about half of the mill’s low-grade product, being shipped overseas. Like all wood products producers, M&K has struggled over the past few years, but Harman says things are finally picking up. “It has been very tough and we are just trying to keep our heads above water until this is over,” he says. “When sales were at the lowest level, we ran the sawmill three days per week and then ran the planer for two days. That kept everyone working, but now we are back up to our full shifts in both areas.”

It is that kind of flexibility that has kept the mill going and both Harman and Nirmal credit their employees for their dedication and commitment. “We have a really good group here and they have been flexible enough to help us weather the storm,” Harman adds.

As the demand for wood products continues to pick up, Harman says M&K will keep running on one shift for now due to his log supply concerns. They will keep searching for new sources of logs and at the same time you can be sure they will also be watching for great deals on used sawmilling equipment.  It’s how the small fish will survive in the
big pond.