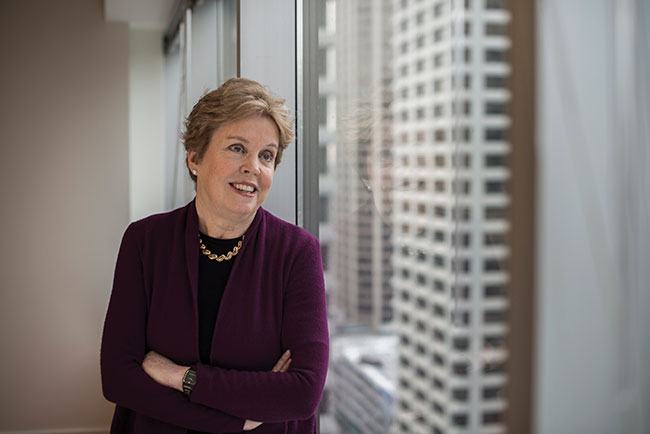 Sustainability practitioner Linda Coady’s career path has allowed her to, as she puts it, look at life from both sides. Having worked with and for associations, industry, governments and environmental groups, she understands what sustainability looks like to each of those players.

The newly announced head of the B.C. Council of Forest Industries (COFI) is now positioned to help guide B.C.’s forest sector fully embrace environmental, social and governance (ESG) principals and capture the added investment dollars that they should attract.

CFI caught up with Coady to hear about her career, her goals as COFI’s new lead, and her thoughts on forestry’s sustainability.

CFI: You have a long career path in sustainability and ESG. What are some highlights?

Coady: I would describe myself as a sustainability practitioner. I got into it through conflict resolution on the B.C. coast over forestland usage issues. That was 20 years ago and it involved companies, environmental groups, local communities, forest workers, Indigenous communities and leaders, governments, international buyers – there was a lot going on.

I started out working for COFI, so this really is a back to the future move. But I got into conflict resolution more deeply when I was working for MacMillan Bloedel, which was subsequently bought by Weyerhaeuser. There was a lot of heated disagreements over coastal forests at that time, with a big cast of players and interest groups around it. I was attracted to sustainability because it was a solution set for some of that conflict.

Those were early days for the concept, after the United Nations Brundtland commission and the definition of sustainable development, which as I recall was “development for today’s generation that does not compromise future generations.” Then I started to specialize and I got hooked on sustainability as a career pathway. Over the course of my career, interest in it mushroomed. Now it’s about ESG and very detailed metrics that are specific to different sectors of the economy. I’ve had a seat on this train that’s been moving for a couple of decades and now it’s really key at the global level.

I went on to work in other sectors – I’ve worked in the mining sector and in the energy sector. I worked for the Vancouver Olympics on the sustainability strategy for those games. I moved to Alberta and I had an opportunity to work with Enbridge in the oil and gas sector, and from there I went and worked for the Pembina institute, which is a non-profit environmental think tank that works on climate and energy. I’ve spent the last eight years working on climate and energy issues at a provincial and national level.

I’ve had the opportunity to work for environmental groups and with companies in this space, which I think is another unique experience. I have looked at life from both sides, being hybrid in that space, and moved through different types of organisations to see how they’re all adapting, evolving and innovating. It has given me, I think, a well-rounded view.

CFI: What drew you back to the forest industry and your new role as the head of COFI?

When the job came up with COFI I was attracted to it because I knew climate-smart forestry was going to be an big opportunity for B.C. And Indigenous reconciliation is now a legal and business imperative here. And then there’s the product opportunities that are being created by market demand for forest products in an era of climate change and reducing environmental impacts. And there are good jobs in the forestry sector and the importance of those jobs in B.C. So, when they asked if I would come back and work in the sector again, I jumped at the chance. I am honoured and excited to be taking on a leadership role in the B.C. forest sector at such a transformative time.

CFI: What are your goals going into the role?

What I bring to this role is a sustainability framework. That’s who I am, that’s what I’ve done, and that’s what I know. My goal for COFI is to have members who are socially, environmentally, and economically sustainable. Beyond that, we need to demonstrate leadership in each of those areas. Because forests are a publicly owned resource in British Columbia, with the overlay of Indigenous title and a shift to co-management with Indigenous communities on governance and stewardship, the successful business strategy here is not just to be socially, economically and environmentally sustainable, but to be good at it. So that’s my long-term, overarching goal.

My short-term goal has been to get out there and meet all the different COFI members and staff and also the stakeholders – the communities, the environmental groups that are active on these issues, as well as decision-makers in government and Indigenous communities. In my first 90 days, I had a lot of conversations with people on what COFI’s priorities should be.

CFI: What do you see as the foremost challenge for the B.C. forest sector?

There are certainly flashpoint issues around forestry in B.C. right now, but those also create opportunity. Old-growth conservation is one example. But, generally speaking, things are not as polarized as it might seem from the outside. There are solutions in areas of climate-smart forestry, new types of products and jobs, new relationships, especially with Indigenous communities and organizations, and new markets globally. These are areas where the B.C. forest sector can build on its fundamental strengths. I would hope that focusing on the opportunities side of things it will make it easier to get to solutions on some of those flashpoint issues.

I don’t think anybody doubts that we need a good, solid plan for old-growth conservation in B.C. I see that as fundamental to the credibility of B.C.’s claim that we practice sustainable forestry. There are differences in perspectives on how we’re going to get there, but those processes are moving ahead. I think the diversity of perspectives and inclusion is really important as the action plan for old growth gets built out. It really comes down to people sharing common values and overall direction. We may not all agree on how you’re going to get there, but I have always found that if you can at least agree on a common end point, that’s a good starting point that you can build from.

CFI: Similarly, what is the biggest opportunity?

I think what those of us in the forest sector have to remember, and I can certainly attest to this, is that the forest sector isn’t the only sector where the pace of change is accelerating. Every major sector in the economy right now is going through tremendous change. Inflation and competitiveness, geopolitics, it’s all changing.

Yes, it’s about public policy, but it’s also about policies and the strategies and the relationships that companies pursue. We’re seeing a lot of innovation now by some companies in terms of their relationships with Indigenous communities. And we’re seeing investors that are interested in timber, yes, but who are also interested in natural infrastructure – carbon, water, biodiversity – a more holistic approach to all of the values created by forests. That’s what I would see as another major opportunity: it’s the role that forests can play in healthy ecosystems, community resilience and the production of products that can support more sustainable living choices.

In my first 60 days of talking to people, the one message that people seem to agree on is the long-term goal of where we’re heading in the forest sector. There are different perspectives, of course, on how you get there, but I see it as an encouraging sign that there is a broadly based consensus on the importance of sustainable forest management and the importance of having a globally innovative and competitive forest sector because of the contribution it can make on a number of different levels.

I take that as a good sign that some of the short-term challenges can be worked through if you have people on the same page as to what the general direction is.

Again, my experience has been that new solutions to complex issues depend on people from different perspectives being willing to step up and collaborate on a way forward.

I’m optimistic. But, I have to warn you, sustainability people are always optimistic. It’s an occupational trait!