Sweden is the world leader in the switch from fossil fuel to bio-energy, and a growing proportion of the bio-fuel consists of logging residue like branches and tops. “Biofuel already supplies a quarter of Sweden’s energy needs and that could be doubled,” comments Kjell Andersson of the Swedish Bioenergy Association, which represents the country’s biofuel suppliers. 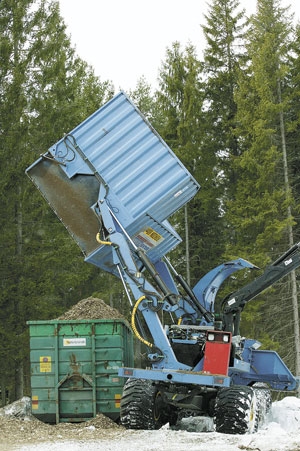 The reason for the high level of biofuel dates back 50 years to when the first district heating network was set up in the Swedish town of Karlstad. Back then, standard oil was used. The aim was to cut pollution by centralizing heat production, thus allowing emissions control systems.

By the time of the oil crisis in 1973, many of Sweden’s regional municipalities already had district heating networks in place, so it was relatively easy for them to switch to biofuel. At that time, the main biofuel was industrial by-products like bark and sawmill chips.

14,700 km of heating The oil crisis hastened the expansion of district heating. The Swedish government invested heavily in district heating plants in an attempt to reduce the country’s oil dependence. Sweden has no domestic oil or gas production, and in the 1970s was one of the countries with the largest proportion of imported energy.

Today, 480 communities in Sweden have district heating, with their distribution networks totaling 14,700 km in length. Together, the heating plants produce almost 50 TWh of heat and electricity each year. More energy comes from such sources as briquettes in individual heating plants, plus waste heat from the forest industry, and this energy is sold to the district heating networks.

The investment in district heating also paved the way for garbage incineration and electricity production in Sweden. Both of these were an advantage for Sweden when it joined the European Union at the beginning of the 1990s. The EU introduced a ban on depositing garbage at landfill sites. This was not a major problem for Sweden, which was already incinerating much of its garbage. As well, biofuel-based electricity production is regarded as green electricity and enjoys tax breaks. All of which helps to explain why Sweden is now the country with the highest proportion of bioenergy in the world. Of Sweden’s total energy consumption of just over 400 TWh, one quarter, 100 TWh, comes from biofuel, of which two-thirds is comprised of various kinds of wood fuel. Branches and tops offer more potential than might be imagined, Andersson explains.

“Say that you fell 100 cubic meters (whole trunks including bark) as sawlogs and pulpwood. Over and above that you have 25-30 cubic meters of tops and branches. If we count the stumps too, that’s an additional ten cubic meters.”

In Sweden there is general agreement that the forest benefits from the removal of branches and tops. It facilitates leisure activities in the forest and improves regrowth. Stump removal is more hotly debated. Environmentalists say the stumps must be left where they are to help prevent soil erosion and preserve species variety. Research is being done to find ways to use stumps without negatively impacting the environment.

“The biggest difference between Sweden and North America is that we believe there’s room for everyone in the forests,” Andersson says. “It’s possible to combine commercial log production with leisure pursuits and environmental considerations.”

Reducing oil usage
Almost all of Sweden’s regional municipalities have one or more district heating networks. One such municipality is Västervik, a small regional municipality with 37,000 residents. Västervik currently has district heating in three communities. The biggest network, in the actual town of Västervik, was constructed in 1983 to solve the problem of a garbage dump that was condemned as unfit for use. Instead of the town opening a new landfill site, the household garbage is now transformed into heat.

“We’re studying the possibility of expanding the heating plant to produce electricity too,” comments Mikael Vinkvist, director of the municipally owned plant.

The biggest of the regional municipality’s three heating plants has three fluid bed boilers. These burn 45,000 tonnes of waste and 70,000 tonnes of forest chips per year. There is a backup oil boiler of 20 MW plus two more backup boilers elsewhere in the network, providing a total of 26 MW. The two other district heating plants run only on chips and produce 6.6 and 2 MW respectively. They are also backed up by an oil boiler. Together the three heating plants provide half the municipality’s heating needs.

“In recent years we’ve only run the oil boilers when we’ve had production stoppages and on the coldest days of the year,” Vinkvist says. Even though the district heating network is continually being expanded, production has not increased in three years. That applies throughout Sweden, due to the milder climate. There is less need to run the reserve oil boilers.

“The result is a great increase in the proportion of production from bioenergy,” comments Sonya Trad, an analyst with the Swedish District Heating Association, the main trade organization for district heating companies in Sweden. “Oil and coal now represent only 12% of the fuel consumption in Sweden’s district heating plants.”
Industry or energy?

Sweden aims to become independent of fossil fuels by 2020. There are a number of current projects focusing on the manufacture of ethanol from cellulose. This, combined with the increased use of branches and tops for electricity and heat production, has the Swedish forest industry concerned that its access to raw materials may be at risk. Those in the bioenergy business feel the concerns are unfounded.

“The big forest companies are themselves investing heavily in manufacturing biofuel,” Andersson comments. “Sweden’s current energy consumption can be supplied completely with bioenergy, wind power and hydroelectric power without affecting the current levels of activity within the forest industry.”

Janne Näsström is an industry writer based in Sweden, and wrote this overview for CFI Magazine. To learn more about the Swedish biomass for bioenergy reality, World Bioenergy 2008 is a good start. The conference, show and tour are slated for Jönköping, Sweden for May 27-29, with full day tours both before and after the event. www1.elmia.se/worldbioenergy.