If Eddie Heideman had his druthers, he’d let someone else cut the wood for his two sawmills in Eganville, Ont. But his family-owned company has a hard time getting all the wood it needs on a reliable year-round basis, which is why they have been supplementing a contractor-based wood supply with their own cutting crews for the past 15 years. They cut in excess of 100,000 cubic metres annually. 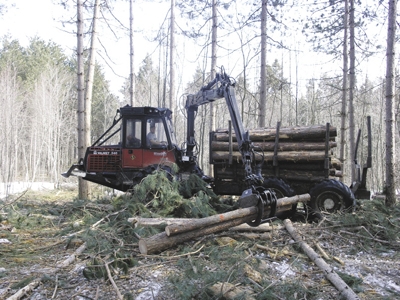 One of Heideman’s forwarders If Eddie Heideman had his druthers

“We would prefer to rely on contracting exclusively, but our suppliers can’t always afford to provide the wood we need at the price we need, when we need it,” says the second-generation president of Lavern Heideman & Sons. “So we do some of our own timber harvesting in a 300-kilometre radius around our two sawmills. This takes us to the Ganaraska Forest outside Peterborough and the LaRose Forest near Casselman. We also do some cutting on private land.”

Started in 1974
Heideman’s family-run lumber business began 36 years ago. That’s when Lavern Heideman, Eddie’s father, decided to open up a sawmill in Eganville, which is about two hours west of Ottawa.

This is an area with centuries of logging history and a population attuned to the forest industry. Even in 1974, Eganville was close enough to wood sources such as Algonquin Park, to make the venture worthwhile.

“My father built our current large log circular mill in 1976,” Eddie says. “It was modernized in 2005 with a new high strain band resaw, but it is still basically run by men, not machines. We then saw the possibilities of small diameter red pine as a market, which is why we began cutting it and subsequently built a scragg mill in 1997.” Collectively, Lavern Heideman & Sons employs about 85 people across Eastern Ontario and
Western Quebec.

In a perfect world, the company would focus exclusively on lumber production, rather than cutting. “You can do both logging and sawmilling, but in today’s world, it is easier if you can specialize,” Eddie notes. “However, the difficulties of finding contractors to work our two crown forest management units, private land agreements and company holdings, means that we have to do some of the harvesting ourselves. There’s no way around it.”

Cutting Wood
Eddie takes sustainable forest management very seriously. He also does his best to keep his lumber supply lines close to home in order to his keep supply and fuel costs down. Finally, he likes to look for new opportunities – such as small diameter red pine, which he says, “we pioneered for treated wood applications.” At the same time, he looks for opportunities to use technology as a way to maximize productivity.

Put all of these elements together, and Heideman’s lumber operations make sense. The company’s strategy is to use its own three-man crews to deal with first harvests on newly managed lands. This avoids the problems of securing contractors who often find the low returns offered by first harvests un-economical. Once the lands have undergone the first harvest, Heideman can turn to contractors when the more economically viable second harvest comes around in 8 to 12 years.

“Typically, we cut about 30% to 33% of stems during the first harvest,” Eddie says. “This includes all the waste wood that has no useful product in it. We remove them to make more room for the commercially important trees, such as white pine, red pine, poplar and maple. When we come back some 8 to 12 years later for the second harvest, we take about 30% of what’s standing. In between the cuts, the forest has time to regenerate itself, while maintaining cover and food for wildlife. Although we do occasionally replant trees – such as after the 1998 Ice Storm when so much stock was destroyed – generally Mother Nature does a good job of this herself.”

Logging Production
At the LaRose Forest in mid February 2010, a three-man crew was in the bush, selecting, cutting and stacking white pine during an unseasonably warm and sunny winter’s day.

Planted in the 1920s to battle erosion of this region’s sandy soil, the LaRose Forest is 10,540 hectares (26,000 acres) in size. It is named for Ferdinand LaRose, a member of the Ontario Department of Agriculture, who spearheaded its planting. Thanks to the LaRose Forest, the desertification of the area was halted. Back when this land was settled, no one knew that it had been a river delta, and that the trees were the only things keeping the topsoil in place. That lesson was learned the hard way, resulting in the creation of the ‘Bourget Desert’ where the forest now stands.

The trees in this part of the LaRose Forest were once tended by the Ontario Ministry of Natural Resources (OMNR) for their pine cones. But after OMNR pulled out of tree plantations in the 1990s, this forest was left alone. The result: The neat rows of pines began to crowd each other, stunting growth as they battled for sunshine.

This is where Heideman’s crew has been working, staying over at a nearby bed-and-breakfast as they push to finish the job within the province’s prescribed time limits. In this case, the cutting has to be done before spring sets in – something that is happening fast as the rough frozen logging road that was built by a Heideman contractor starts to thaw.

The process here is simple. One worker goes through the forest, marking trees for harvesting based on spacing for the remaining stems and a predetermined amount of sunshine meant to reach the forest floor. A second logger follows up in a Valmet 911 processor equipped with a Valmet 965 head, deftly cutting, cleaning, processing to length and stacking the wood in piles on the forest floor. 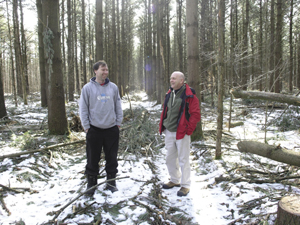 A third crew member comes along in a Valmet 546 6-wheel 12-ton forwarder and picks up the logs – sometimes tapping them vertically on the ground like someone leveling up a stack of drinking straws – then places them inside the forwarder’s cargo bay. A quick jaunt to the nearest road and the logs are stacked for eventual pickup by the company’s 2000 Western Star self-loading log truck. Given the apparent onset of spring, they may have to wait a few months until the road dries out.

The work is quick, professional and comparatively kind to the forest. The trees that remain are strong and tall; more good trees have been left behind untouched than have been cut. “These trees keep the forest alive, providing us with clean air, clean water and wood for the future,” Eddie says.

Challenges
Lavern Heideman went into lumber because he saw it as an industry with a future. Today, his son and successor, Eddie, and grandson Kris, still think there is a future in this industry, despite its challenges.

“They’re not building new pulp mills, and more are closing down,” Eddie muses. “This makes it harder for us to sell our residues from the sawmills and the roundwood for pulp. Regulation is one of the biggest challenges we face. There are so many rules that we have to comply with; so many hoops we have to go through. The Endangered Species Act and lightening the footprint in Algonquin Park are being put in place without the science and facts to show if there is a need or benefit to the environment.”

Add the uncertainties of the lumber and housing markets, ongoing competitive issues with the United States, and the rising Canadian dollar, and Lavern Heideman & Sons has a lot on its plate.

Still, Eddie has no intentions of quitting, and he continues to look for the next big thing. “We really brought small diameter red pine into the marketplace; unfortunately a lot of people clued in and became our competition,” he says. “That happens. Fortunately, I believe that there are other opportunities out there, and that our approach to forest management and lumber cutting will keep us alive and able to capitalize on those opportunities when they appear. We also have a good employee base together with a willing and able third generation to carry on.”

James Careless is a freelance writer based near Ottawa, Ont.