Aug. 15, 2017 - As with any of Canada’s forest products companies, family-owned Teal-Jones Group is accustomed to facing challenges with steely resilience. In spite of the media storm around the U.S. duties, Teal’s pressing concern these days is about shrinking fibre supply in British Columbia. Reductions in allowable annual cut are occurring or are expected this year in Quesnel, Prince George, and Lakes timber supply areas. 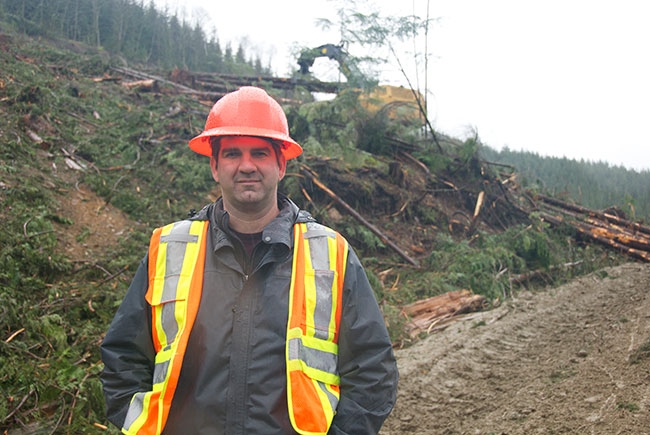 Teal-Jones’ owners Tom and Dick Jones are open about their concerns with dwindling fibre supply. “We had in total almost a million and a half metres a year; now we have less than half that,” Dick says. “Back in 2004, the government took back 20 per cent of the major licensees cut resulting in additional fibre shortage for the company’s mills.”

The result has been reduced shifts at their mills, amounting to hundreds of lost jobs. It’s a common story for the big forestry players in the province.

“We have to do the best we can for our people here,” Tom says.

People power
According to the Jones’, they’re dealing with this hurdle the way they always have, through the strength of their people. “We’ve have the best employees in the world. When our competitors say they have the best people, I tell them they have the second best, we’ve got the first,” Tom says. “Our people are our real resource.”

Teal’s fibre supply story begins with the company’s chief forester John Pichugin. He came on board with Teal in 1993 as part of an acquisition that included a sawmill and timber license in Boston Bar.

The acquisition was strategic for many reasons, Dick explains. “It was the only opportunity we had to gain any kind of a timber base so we bought the mill to get the timber, and we bought them both to get John,” he says.

Pichugin says it’s difficult to source fibre for a number of reasons, which include constraints on the land base and log exports. “You have to compete with others who need logs, so it’s important for Teal to have their own tenures to source their own logs when they can,” he says.

Adding to their roster, Teal hired Rob Ravai as manager of log supply initiatives and Fraser Valley operations last fall and promoted him to vice-president of log supply and Fraser Valley operations in early 2017. Ravai oversees about 400,000 cubic metres from Teal-Jones’ licenses as well as other incremental volume opportunities in the province. “This is very important to our business, we have to have timber supply in order to efficiently run our mills,” Ravai says.

It’s Ravai’s job to make sure there’s always fibre flowing to Teal-Jones’ mills in the area, which include the JS Jones Small Log mill and Stag Timber mill in Surrey, B.C., and the Revelstoke Shake/Shingle cedar mill. The company’s operations also include Duke Point Log Sort in Nanaimo, B.C., a block mill in Revelstoke, B.C., a Southern Yellow Pine sawmill in Antlers, Okla., a joint partnership with Downie Timber and the City of Revelstoke in a Community Forest tenure in B.C., and a planer mill in Sumas, Wash.

Ravai leads a log supply department within Teal-Jones Group of about three staff members who purchase logs on the open market and bid on timber sales. Their volume targets vary over the course of the year, anywhere from 50,000 to 65,000 cubic metres each month depending on which operation is in what stage.

“Log procurement is the main log source in order to operate our mills and is managed by Jack McLeod and his team,” Ravai says. “They have done a great job on their part in keeping the mills operating through the tough winter and spring.”

In the woods
In April Ravai gave Canadian Forest Industries a tour of the company’s cut block near Mission, B.C., where DLind Contracting, one of Teal-Jones’ regular contractors, was harvesting on the steep slopes (read their profile in the May/June 2017 issue).

Winding our way up the logging road, passing through thick second-growth Douglas fir, hemlock and cedar, Ravai explains some of Teal’s strategy to keep fibre flowing.

“From our timberlands over in Honeymoon Bay on southern Vancouver Island and here, we cumulatively do about 700,000 cubic metres,” Ravai says. That makes up approximately 45-50 per cent of the mills’ needs. “The rest is volume we have to purchase – outside purchasing – or we have incremental volume through First Nations market log agreements, or timber sales or other forms of additional volume, including making offers on log export volumes – a strategy we use to ensure the mills have the necessary log supply,” he says.

In the Fraser Valley, the primary species are Douglas fir, hemlock and cedar, and in some old growth blocks there is cypress. The average piece size is 0.5 to 0.8 cubic metres per log, generally between an eight-inch diameter log to one metre.

The contractor for Teal-Jones in the lower Fraser valley does a combination of cut-to-length ground-based and high-lead logging. “You can see how steep the ground is so you need to get the wood out somehow so that’s either in the form of a grapple yarder or mini tower.”

If the summer and fall are too wet, it makes the ground unstable and slows down the logging operations, but if it’s too hot with no rain, operations shut down if there is threat of forest fire. “That interrupts the log flow,” Ravai says.

Relationships matter
Operating in the lower Fraser Valley, DLind Contracting is an almost year-round logging contractor for the Teal-Jones Group, harvesting between 170,000 and 190,000 cubic metres each year. The contractor owns all the machines and the trucking side of the business.

“It’s a benefit for us because we have a good logger working for us at fair market value, we appreciate that,” Ravai says. “It’s a good, productive, safe company. There’s always some growing pains but that’s with any relationship.”

Teal-Jones also contracts in Honeymoon Bay on Vancouver Island and in Boston Bar, a site on the Coquihalla Highway that runs between Vancouver and Kamloops.

B.C. had a difficult winter with heavy snow so purchasing logs has been more difficult than usual, Ravai says. “We’ve been relying heavily on our operations this winter and spring for volume for our mill’s, which has been a benefit because we’ve been able to keep the contractors working. It’s not a huge amount of volume but every bit helps.”

The steady work has allowed a subcontractor for DLind to purchase a brand-new Tigercat LS855D. “It’s quite a heavy machine with a levelling cab so the track assembly goes up and down. He has to do a steep slope assessment first prior to going in, but then he can go up the slopes. We’re very safety conscientious,” Ravai says.

Ravai has been having discussions with his contractors about the opportunity for tethered logging, but the decision is not easy.

“The planning is really critical,” Ravai says. “We have to ensure we have the timber supply in front of us to make it worth the investment to support the cost to efficiently operate such specified equipment.”

Planning would involve building a double-road system in a cut block, he says, which would create an upper road where the excavator with the winch assist would walk to move the buncher and hoe chucker.

“It’s important for us to recognize the challenges of contractors and what they’re up against,” Ravai says. “You have to understand logging productivities and how they are comprised. That’s important. So that I know how many loads they can do a day, I know how quickly they can load a truck, I know how much volume he can put on that truck and the truck haul distances.”

“You have to understand those in order to establish a fair rate that respects both of us,” he says. “It’s not roses all the time but we have a fair working relationship.”

Results oriented
Fibre shortage is a recurring challenge for B.C. mills and has forced Teal-Jones and other timber licensees to plan accordingly.

“Our primary focus is on the second-growth for small-log mill, however, old growth is important as well for the large diameter mill,” Ravai says. “We’ve tooled our small-log mill accordingly. We prefer to cut an eight-inch or better, but now we can cut that smaller diameter, which works well when you have a really nice piece size and when inventory levels are lower. The small log mill requires a steady diet of logs.”

Another strategy is incremental volume. Ravai works with different licensees as well as log trading houses to secure trade deals.

Teal-Jones Group has a log-purchase agreement with Downie Timber located in the B.C. Interior that allows Teal to exchange coastal logs for Interior cedar to supply its shake mill in Revelstoke. These agreements are a “win-win”, Ravai says, allowing both companies to get the logs they need to keep their mills running. “That’s our preferred option,” he says.

Ravai says he thinks Teal-Jones Group is further ahead than other companies. In spite of the challenges, the company has a lot of good things going for it.

“It’s a really good company. We’re in a favourable location and we’ve got a heck of a crew – they are very experienced and good at what they do. It’s a family owned business but it’s very professional in that environment,” Ravai says. “We are a diversified company that produces many end products, as well as custom cut specialized products for a variety of our customer needs. Our doors are always open.”

It’s a sentiment backup up by Pichugin.

“Tom and Dick work 24/7,” Pichugin says. “Whenever I see them they have sawdust in their hair and on their shirts; they’re very hands on. They built the business from scratch so they know what’s going on. Their ability to adapt – whether it’s the market or a mechanical problem in the mill – is a huge asset for the company.”

“We started buying out little quotas, some as small as 56 metres, and then we amassed almost 150,000 metres of cut. Then in addition to small business sales we do about 250,000 metres a year,” Dick says. “In addition, our company has been working with First Nations since the early 1990s.  Our mills are involved in value-added products including guitar tops, finger jointing and a variety of different products from our shingle mill. We don’t export logs and believe in keeping jobs in B.C.”

The company acquired the Boston Bar Mill and Pitt Lake Logging Division in 1993, giving them access to over 500,000 cubic metres per year in B.C.’s Fraser Canyon and the Lower Mainland. In 1999, the company bought a timber license based in Sandspit, a Haida Gwaii community. And in 2004, they bought Tree Farm Licence 46 at Honeymoon Bay on Southern Vancouver Island.

Today, the company is one of the largest private forestry firms on Canada’s West Coast employing about 1,000 community members across B.C.