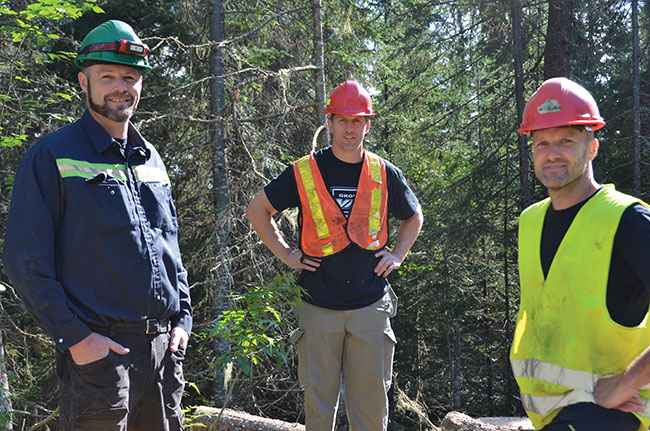 A Liebherr LH 30 material handler loads wood into a truck, which is strategically parked between two piles of logs, at the border between Lac-Saint-Jean and La Mauricie, Que. The impressive machine completes its work and then starts filling a second truck, without even having to move.

“The loader can operate without even lifting its legs,” says Stéphane Roux, who co-owns contracting company Groupe Val with Sébastien Dufour and Frédéric Bonneau.

A little more than a year ago, Groupe Val partnered with Mathieu Bouchard, Luc Simard and Maxime Simard to launch Chargement 2 ML, a trucking firm.

“The partnership solved challenges we were having with our existing truckers,” Bonneau explains. “Entrepreneurs who own their own vehicles know exactly how much money they are making and what the costs are. This enables them to mobilize the right equipment at a job site, to optimize loading, and to avoid downtime.”

When Groupe Val operated its own loader, it only filled between 22 and 25 trucks per shift. However, Chargement 2 ML increased that total to between 30 and 35 loads.

“I never thought that they could do that much,” says Dufour, who is thrilled to have “young blood” in their operations.

Groupe Val’s arrangement with Chargement 2 ML, which was done in part to facilitate access to financing, was a natural fit. Group Val handles administration and legal requirements. The contractor-operators take care of the machinery and operations.

It’s a winning formula that Groupe Val also uses in its investments in Forestiers Dary Lalancette and Forestiers SDR, both of which specialize in harvesting operations. As part of the deal, Groupe Val agreed to enable the entrepreneurs to buy back the shares in the company over time if they want to become independent again.

The company won’t hesitate to support the development of other subsidiaries. “We don’t want to close any doors,” Dufour says. “If these entrepreneurs want to grow, we are not going to stop them. Because if we try, they can always go elsewhere.”

Harvesting operations
Groupe Val works with seven forestry teams (soon to be eight). These include partnerships in two subsidiaries. The company also operates three feller bunchers (two Eltecs and one Direct) that are equipped with Ponsse heads, as well as two Ponsse Elephant King forwarders. Roux leads the harvest team.

In all, the 15 hard-working team members who work for the general contractor harvest a little more than 700,000 cubic metres of wood per year, most of which is related to supply guarantees tied to two sawmills: Scierie Lac St-Jean and Scierie Martel. Groupe Val also does harvesting for contracts won through the Bureau de mise en Marché des bois, as well as for Resolute Forest Products, Arbec and Industries TLT.

In fact, the company recently harvested a 90,000-cubic-metre lot for Resolute Forest Products. Of that amount, 20,000 cubic metres of hardwood were sent to Westrock in La Tuque, Que.

The road to cost savings
To be able to harvest such large tracts of land and still make a profit, it’s critical for the group of entrepreneurs that their operating costs stay low.

The increasingly large number of land auctions has transformed the balance of power between entrepreneurs and processors, Bonneau says.

“Before, you had to accept the price that was offered,” he says. “However, companies are adjusting to working with the bid process, which enables them to offer pricing that is in line with operating costs.”

One key to lowering operating costs is to properly prepare. “When you build the logging roads a year in advance, you only need to put on six inches of gravel,” Bonneau says. “But if you wait until you do the harvesting, you have to put on three times as much.”

The difference works out to $10,000 more per kilometre. With more than 50 kilometres of road per year to cover, that means acting early can save the company $500,000 per year.

With Groupe Val’s razor thin operating margins running between one and three per cent, building logging roads in advance can make the difference between making a profit or reporting a loss. Four years ago, it was difficult to get operating sectors defined in advance. However, the message is slowly getting through. Today, the company almost always completes a large portion of its logging roads a year in advance.

Groupe Val handles all road operations using an internal fleet of about two dozen pieces of heavy equipment. These include several tractors; excavators from Cat, Komatsu, Doosan, and Link-Belt; Komatsu wheel loaders and John Deere levelers. The most recent addition is a Link-Belt excavator, an increasingly popular model, says Stéphane Taillon, owner of JYL Equipment, who has sold 70 such machines in the past three years.

Leading by example
Groupe Val, which was founded in 1972 by Paul-Émile Morin, employs about 170 people. That includes 45 employees and a range of sub-contractors.

“We are proud of the entire team,” says Dufour. “But, we also lead by example by working hard, focusing on effective communications and being present in the field.”

However, the three entrepreneurs continue to seize opportunities when they arise. That includes the integration of a fuel supply service into Groupe Val and the acquisition of Industrie L. Lapierre, a supplier of forestry machinery parts. This enables the company to source fuel and parts internally, thus increasing profitability.

The other good news is that the average age of Groupe Val’s employees is under 40 years old. That means these advances might just be the start.