Serge Bergeron, product specialist for feller bunchers at Volvo is pretty relaxed these days. And why not? The former representative with Direct has been working with a team of forestry specialists for several years to get Volvo’s new line of tracked feller bunchers onto the market, and now the finish line is in sight. CFI caught up with Serge just a few weeks after some extensive testing in eastern Quebec’s mixed wood forests on the supplier’s largest buncher, the full-swing radius Volvo FB3800C. He was happy with the machine’s performance, and the test operators’ response to it. 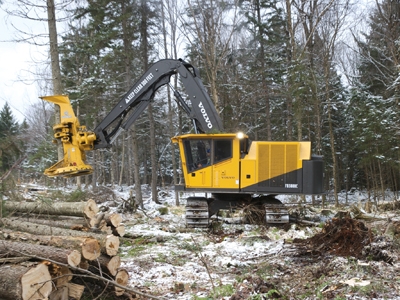 “They really commented on the tractive effort, the stability, and the swing torque, which is great to hear. To me these are the real advantages of our bunchers, and are key features that any logger should focus on. There are a lot of nice features that we, or anyone else, can put on a buncher, but these ones pay the bills. Things like tractive effort and swing torque will affect your production every day, so you want to get that right.”

Getting it right is no surprise given the Volvo bunchers’ heritage. The multinational company bought Quebec-based Direct a few years back. Despite an extremely successful modular design admired by logger and competitor alike, the Direct crew had a hard time competing with the big boys on the global stage. In today’s sophisticated heavy equipment market, manufacturing and assembly systems become just as important as great design and product support to long-term survival.

That’s not an issue for Volvo. The company has highly efficient manufacturing systems in place, and has now dedicated considerable resources and a seasoned forestry staff to creating a complete forestry line-up. 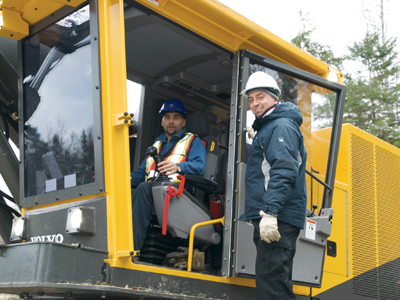 Mess with Success?
In fact, Volvo and its forestry team only messed with success where they were sure they could make things better. Key elements of the original Direct approach have been left in place, but there have been noticeable changes in the engine, hydraulics, torque, and the addition of the Volvo Forestry Care Cab.

“Instead of the Cummins QSL9 we have a Volvo engine of course – a 324-hp D9 Tier 3. And it’s fair to say that the cab is now more than spacious. Things like operator comfort and safety have been fully addressed. We kept the same shell that we had with Direct, but it is eight inches longer – now 42 x 72. We have a Volvo seat, which is a top of the line seat with heater and air suspension, Volvo A/C and heater with 15 louvres, a Volvo display to replace all the gauges that we had with Direct, and we use proper plastic inside mouldings for a very professional finish. All around it’s just a beautiful place to work.”

That new engine and control system should also allow for another big change – lower fuel costs. Serge says the savings should be in the 10 to 15% range when all the dust settles.

“That’s huge. We’re still early in production testing, and in thinning mostly here, so it’s hard to put a solid number down. But with all of the calculations we’ve been doing over the past 18 months, that’s where we expect to end up.”

Other than engine and cab, the designers “Volvo-ized” a few other key machine components, including a Volvo EC360 swing mechanism, Volvo EC460 track components, and Volvo hydraulic cylinders. Now it’s time to see how all the parts, experience, and ideas work together in the field. 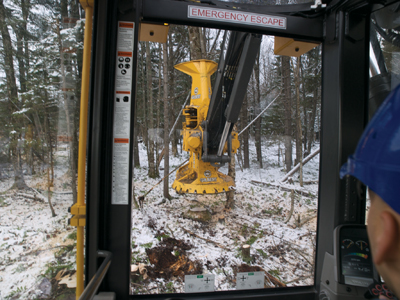 The machines were introduced at DEMO 2008 in Halifax last September, and Volvo has been running tests in the woods ever since. As of early December, Volvo had pre-series machines in both Quebec and BC. For Ontario through eastern Canada, Serge expects to have retail machines in the hands of its dealer Strongco Equipment by April or May. Readers in western Canada needn’t wait that long, however, as BC-based dealer Great West Equipment already had two of the mid-sized, minimum swing radius Volvo FB2800Cs ready for sale as of mid January, and was expecting a third before month’s end.

“They’re equipped with the larger Extreme Duty undercarriage and 28.5-ft boom – It’s a nice package that will compete head to head with larger machines in that market,” Serge concludes. “We’re really excited to see what Great West does with them. They’re enthusiastic and well organized to handle and service this new product, so it won’t take long to see results.”

And as always, you’ll read about them here first.