For 2011, the Canadian Truck King Challenge was a heavy duty event that took advantage of the fact that three Detroit builders each unveiled a new Heavy Duty pickup truck in the past year: a rare occurrence. These trucks – the Chevy Silverado HD, Ford Super Duty and Ram HD – were each delivered as crew cab diesel-powered versions. The three were similar in most respects and the tests were conducted back to back and all on the same day. As always, we tested at our private IronWood test facility near Head Lake, Ont. 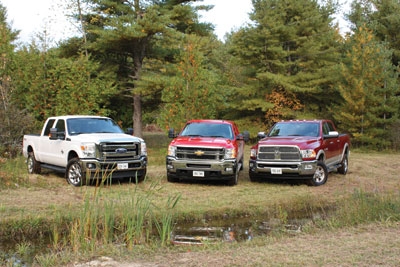 This is the fourth Canadian Truck King Challenge and, just like in other years, it rained. That seems to be the Challenge curse – over the past five years each test has been rained on. So, we towed in the rain, drove off-road in the rain, and loaded and unloaded the trucks with rain running down our necks. But then this is why Truck King is as authentic as it is – we run the tests in real life conditions.

Empty test loop notes: GM has put all its R&D dollars into a great leap forward in chassis and powertrain development for the new 2011 Silverado HD. Although this is great, it also means the changes to the body and interior design are negligible. Body style-wise this means little, the outside design is still fresh, but the interior design is now the oldest and could be considered “tired.” The ride is firm and the road manners steady; steering, however, feels “heavy.” Seating is comfortable with a decent centre armrest (plus storage). I noted that the interior soundproofing has been improved. The dash is functional and remains the same as last year. The rear seats flip up for storage, but the floor is not flat (as Ford’s is).

Towing/loaded: The Duramax is a proven diesel (1.2 million built to date) that even before this upgrade had enough jam to pull up to its limit easily. Now with the stiffer chassis, towing feels more confident. The Allison transmission is smooth regardless of the amount of weight towed – frankly, it’s an excellent gearbox. It also has a manual “tap up/tap down” shift feature along with a tow-haul setting. The smart engine brake works with the transmission to downshift and hold the load on grades – no matter how severe.

GM has deleted the four-pin electrical trailer connector from its standard hook-up – Ford and Ram have both kept them; however, it is well placed in the bumper. GM has an optional back-up camera for the lone driver hooking up a trailer. The mirrors are adequate, but could be improved.

Off-road: What GM offers for off-road traction is a neat mechanical differential locker built by Eaton. This locker has an internal spring-loaded pendulum that reacts to centrifugal force – flying out when there is wheel slippage and locking the gear set. It’s completely automatic and when engaged gives the 4WD system a goose as the back end slips. Excellent.

Conclusions: This GM Silverado HD is the best ever, but this market is highly competitive. With this effort, GM is back in the game with Ford. That was the consensus among the judges too. We could all at least agree that both are now neck and neck in this race.

Empty test loop notes: The new dash has clear, large gauges and a larger centre information screen (4.2 inches) that displays info from the radio settings to the trailer connections. It’s easy to see, bright and can be used with steering wheel mounted five-way buttons.

This Ford (granted it was the one-ton) is the stiffest ever and so I found it had a tendency to skitter on the washboard during my test drive. On the other hand, the new steering is confident, with good on-centre feel.

Large catch-all rubber floor mats are nice. The seating is very good, but four cupholders up front? A bit of overkill? The new engine is a torque monster, yet vibration is low, and noise is well controlled. Ford claims as much as a 20% improvement in fuel economy over the outgoing 6.4L. The signal stalk has been changed; it no longer “sticks” when activated, which can be slightly annoying. Several extra inches of floor space have been added to the new Super Duty Crew – most of which finds its way into the rear seat area. This makes the rear bench comfortable and with the seats folded the large flat floor lends itself to easy loading and unloading of equipment, tools or groceries.

Towing/loaded: The Ford has powered mirrors that extend for trailer towing. These are excellent; however, Ram found a simpler solution (see Ram review below). I noted that Ford’s backup camera also doubles as a convenient way to hook up a trailer alone. Ford also offer four- and seven-pin connectors, but they are still located below the bumper – why? This location gathers more dirt and grime than a through-bumper installation. Ford’s tailgate step and handle is a nice feature that has yet to be copied by the others.

The new TorqShift six-speed transmission that Ford has coupled to its 6.7L Power Stroke gives me pause. Under load I had some rough up-shifts; while it didn’t happen regularly it was noticeable. On-road, or towing, the truck oozed confidence.

Off-road: Shift-on-the-fly controls for 4WD on the Ford work well, and they also offer a button operated electronic rear differential locker (as opposed to the automatic mechanical GM system) and Ford was the only one to have manually locking front hubs. This makes it the only truck with true 4WD among our test units. Clearance was good, which contributed to the very rugged off-road performance of this truck.

Conclusions: The hood on this 2011 Super Duty, gets “power dome” and with the large Super Duty logo stamped into the upper grill the brand and its claim to being the most powerful HD out there is never in doubt. This look is polarizing – buyers love it or hate it. You decide. As for under the hood, Ford has made a huge investment in the new engine and associated systems. At first blush this effort looks very good.

Empty test loop notes: The engine and transmission in the Ram is the veteran combination of the 6.7L Cummins turbo-diesel (350 hp and 650 lb.-ft. of torque) and six-speed automatic. This is now the lowest power output among the three – however, how much power is enough?
My test truck came with carpeted floor mats; these hold the dirt and are hard to clean. Otherwise the interior is excellent in both soft-touch materials, accents and the interior design. The drive was confident and comfortable – in fact, maybe a little “soft.”

Towing/loaded: The Ram has the best mirrors in the bunch, they easily flip up to resemble “west coast mirrors” of old. No power means no failures. Dodge also provides four- and seven-pin connectors in the bumper – a good, protected location. My tester didn’t have a backup camera included – however, one is available. Ram was first to offer a button-activated engine exhaust brake – this is still there and works very well while towing. This feature holds the load on grades, saving the brakes. Its operation is tied in with the selectable gearing feature on the shifter handle.

Off-road: The truck has a two-speed transfer case (as do the others) for 4WD HI and 4WD LO that’s an electronic shift-on-the-fly setup. Where the Ram falls short is it lacks a rear differential locker. In effect, without one, it really is just half of a 4WD truck. Of the three it’s the most likely to get stuck. The other noticeable omission is a traction control system. This truck may spin its wheels off-road as well as on if over-torqued.

Conclusions
Of the three trucks, design-wise, inside and out, I like the Ram best. However, it appears that is where the development dollars ran out. While the powertrain is decent (and proven), it is also the oldest of the three and the capacities offered are the lowest. There are also obvious omissions in the area of traction control and electronic stability systems that both GM and Ford have.

These are all excellent vehicles and the best piece of advice for anyone in the market for one of these trucks is visit your local dealers for a test drive and put all three through their paces. It really comes down to personal preferences.