Nova Scotia logger Dana Day has logged for the same company for 29 years – Only it’s not really the same company. Over the years it has been Scott Maritimes, Kimberley-Clark, and most recently Neenah Paper. Yet Dana has been bringing logs across the same scales for almost three decades. 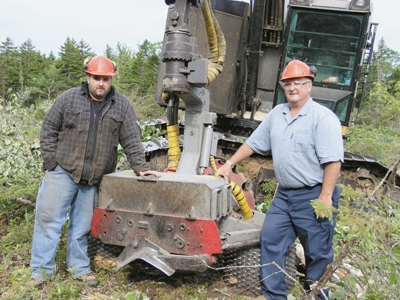 “I don’t know if that’s good or bad, but there it is,” says the amiable contractor as we head out into the woods not far from the Halifax International Airport. With his son Matthew at the helm of one of the crew’s processors, the Day name may yet outlast a few more company names before the end of, well, the day.

The Day family’s start dates back to Dana’s father and grandfather, who used horses to winter log around their farms. Day himself was never one for horses, but was out in the woods at age 13 during vacations and week-ends helping out his uncle and local logger Carl Gilroy. “It was all trail cutting – Haystacking we called it, so now I’m really dating myself.”

Dana ended up working for Carl Gilroy full time, and in 1978 he hit the big leagues when he bought part of the contract and some of the gear from the logger.

“He was a pretty big contractor back in the day, and he wanted to retire. He was just about the nicest guy you could work for, and a real gentleman. He set up quite a few of us on our own. I bought a Timberjack forwarder – an old double bunker – and an old machine we called a Buck Master, which was like a forklift with a saw up front for junking up 8-ft wood. I also bought a pulp loader to load my own wood. It was an interesting time,” he adds with a smile. “I had 22 guys working for me, and only three were younger than myself.”

Dana now has a lot more gear to bag a lot more volume, but has just 14 employees to do it, counting himself. He’s no longer among the youngest of the crew, but he’s still strictly in the harvesting business, running a three-phase cut-to-length (CTL) operation. He has a small Terex backhoe for minor road touch-ups, but otherwise roadbuilding, loading and hauling is handled by other Neenah contractors. While he worked the hauling side himself at one time, he converted 100% to the harvesting end of the business in 1990 when Kimberley-Clark was moving volume to CTL, and has stayed on the logging side since.

His CTL business started with a Rottne double-grip harvester (“I made money with that machine”), but switched to Rottne single grips soon after. Those proved a tougher go as a mixed wood diet, undergrowth, and unmerchantables combined to slow production and wear down smaller gear. He says the smaller rubber-tired harvesters took a beating in these conditions, especially the cranes. To counter this, Dana moved to all track machines in 2004. 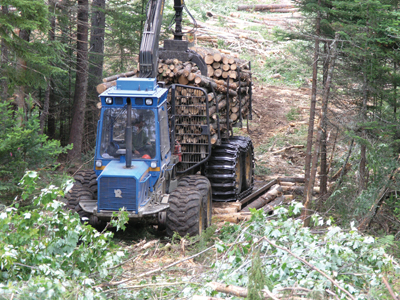 Once you have track…

His first track machines were the early model Cat 711s, added through the fall of 2004. Each sports a LogMax 7000 head, and together they’ve proved a good choice the logger says. He feels they handle the terrain and mixed-wood diet well, but most importantly, he adds, they are proving durable enough to last year after year.

“I’m not saying I haven’t had issues with the carrier. They were early models, and changes have been made to address some of the issues we’ve had. But I’m not having the maintenance, repair, or downtime I was having with the smaller rubber tire machines. For what we do here, tracks are the answer.”

As for the heads, he says they are marked improvements over the older 750 models they used. They are more powerful, more reliable producers, and smarter to boot.

“We really like the new Motomit systems for measuring and the information it gives us. It’s logging gear, so there are always things to work on, but the heads have worked very well.”

Adding the Cat 721 buncher in 2005 was a bit more complicated, Dana adds. Like many loggers, finding the perfectly balanced logging system in all stands and wood types was elusive for Dana. For bunching power, one buncher couldn’t quite keep ahead of three processors in most stands, but two was overkill. The answer came in the form of a really good deal on another Cat.

“In most stands one buncher didn’t cut it, and a really good deal on the 721 came along, and it has turned out to be a good producer. It runs one shift – but a really long one. It’s nothing for that operator to put in 14 or 15 hour days at times, and with the rest of the phases running two shifts, it’s really well balanced.”

The bunchers cut over 95% of the volume, with the harvesters doing their own felling only as needed. Both bunchers run Gilbert 1252 high-rotation heads, a versatile option Dana is also pleased with.

“I like to keep as much product the same as possible, since you can’t keep a good parts inventory running two different heads, three different harvesters, etc… I’ve had great success with the Gilberts, and I like the 220-degree rotation on them. I’m not going to say that rotation system is maintenance free, but it’s almost. I’ll put a set of bearings in now and again, but that’s it.”

The logger runs all Quadco teeth, and a mix of Quadco, Deere and Gilbert (spare) blades.

Between the Cat carriers and the Rottne forwarders and LogMax heads, Dana says he has been very lucky with local support. “Like I said, I had issues with the earlier 711 models, but I find Cat and the dealer (Atlantic Cat) very supportive of their product – My dear, they treat you well. Parts support has been great – If I even mention I may need a part they get it in. But of course Rocan (Rottne and Log Max) has me spoiled that way too – It’s all right there when you need it.”

Despite reliable gear and a 5 day/week, double shift schedule on processors and forwarders as needed, Dana still finds it tough to meet his annual production goals. His target with the mill is 130,000 tonnes/yr of mixed species and products, but wood size, quality and high unmerchantable counts conspire to limit production.

“I’m on target so far for this year, and I’m in good wood here” he told us back in early July, “but if I make the 130,000 to 135,000 tonnes it’ll be the first time. It all depends on your wood diet around here to get the volume, and the wood’s not as good as it used to be. Now if you get good wood, the ground is really bad to compensate. I can’t blame the operators – they work the hours, and will work the odd Saturday. I don’t ask them to, but they will from time to time.

Dana tracks production on a block-by-block basis, and makes sure hourly machine production is on target month to month. Still, he admits he’s no fanatic of the recent trend to track machine and operator time by the nanosecond. The veteran feels this overlooks the most important link in the modern harvesting chain – the skilled operator.

“Numbers are important; don’t get me wrong. We track them. But I don’t have a lot of turnover, my guys know what to do, and I trust them to do it. Look, there aren’t a lot of youngsters coming out to the woods. There are a lot of options today that pay as well or better, and let’s face it – Running a piece of logging gear is not luxurious by any stretch. It’s not for everyone, but one of the draws is the independence and freedom of working in the woods. Take that away, and what’s left? So I know my hourly averages, and try to gently keep things where they need to be, but I don’t force the hourly production numbers the way some do. Good or bad, that’s my style,”

It may be a style that will serve us well in the long run. Speaking of the long run, Dana’s still not sure where the dust will settle where his own son is concerned. Matthew has been involved in the business for over 10 years, and would like to one day take over. Watching the nature of the business change over the past decade, Dana is not as sure.

The soft-spoken logger has been involved in a local contractors’ association formed two years back to push the logger profitability issue to the fore, and now that negotiations have been spun down to the individual company level for the most part, he is involved in the Neenah committee as well. While there is always room to talk rates, he gives his company full marks for keeping the mill running and his crew working well over 45 weeks per year on a regular basis. “Over 30 years, that has made a big difference on the bottom line, and I know it.” But when asked if he wants Matthew to step in, there is a rare, and long pause, before he answers.

“That’s the hard one,” he finally continues. “He’d like to, and I’m not saying I’m against it. Even though I’ve made my living at this – and in large part because my wife, bless her, has been so supportive all these years – it’s hard to recommend it to someone else. If I could feel a little more comfortable with the way things are going in the industry, and for us contractors, I’d step back a bit quicker, and work Matt in. He’s got the experience. But right now I’ve got a lot of reservations, and that’s not right. If I’d been doing another business successfully for as long as I have been doing this, I’d never hesitate to bring my son in, but I’d never live with myself if he lost his shirt on it.”

In the end, that decision may just wait for another Day.