Oct. 21, 2014 - Smaller, more powerful machines that are more comfortable and easier on the environment are part of the evolution of forestry, Mario Gauthier from Faconnage MG believes. That’s the reason he has opted for a Ponsse Fox harvester with an H5 harvesting head for his logging operations in Côte-Nord, in northeastern Quebec.

Mario Gauthier was the second forestry entrepreneur to get his hands on a Ponsse machine when they first appeared in Quebec in 2000. Back then, he bought a Buffalo King.

Over time, he has become an avid Ponsse fan. Equiped with an Ergo harvester and an Elephant King forwarder, he got his hands on a Ponsse Fox last year. (His Buffalo Dual went up in flames last year and hasn’t been replaced.) He chose the Fox primarily because it is comfortable to drive. “On the north coast, the terrain is really harsh. There are mountains, trails and a wheeled machine is much more comfortable,” says the 56 year old who benefits from the improved quality of life while working.

The terrain is so extreme that it was chosen as the test environment for Ponsse’s Elephant King before putting it on the market. Gauthier got to test the machine a year before it was available for purchase.

Ponsse Fox
The Ponsse Fox is a shocking sight in the Quebec forest. “When I show this machine to foresters, they all say it looks like a tractor. But it works, it’s economical, it’s quick, comfortable and quiet,” says Jean Trottier, president of Hydromec, the host of a Ponnse machine demonstration in May.

“I told myself this would never work in the forest! Ponsse makes refined machines. But I realized we don’t need tanks to go into the forest,” explains Gauthier. When visiting Europe, he found that the Europeans were cutting bigger logs than those found in Quebec using smaller machines.

It’s because of European environmental standards that the Finnish manufacturers began to produce lighter machines that are easier on the environment. Its eight wheels keep it from destroying root systems and lessen the soil compaction. With an H5 harvesting head, the Ponsse Fox weighs in around 18,200 kilograms (40,100 lbs). “And since gas is more expensive, it’s a priority for them to reduce fuel usage,” he reasons. And so the machines are lighter … and fragile.

That’s why operators must change their way of thinking to maximize the positive aspects of the machine. They must be more meticulous and aware of their surroundings. “The machine forces the operator to be more intelligent,” says Gauthier.

In Quebec, wheeled harvesters make up on 10 per cent of the market but they occupy 100 per cent of the European market. “The kind of machine the people of Quebec want would never work in Europe,” Trottier notes. “It would be too heavy.”

“I sincerely think these are the machines of the future. Most foresters wouldn’t agree because they aren’t there yet. But soon, for environmental reasons, we won’t have the choice,” Gauthier estimates. He compares it to the automobile industry that started making dramatically smaller vehicles to curb fuel usage.

“In the northern forests of Quebec, where we find softwoods from 6 to 14 inches in diameter, it requires a machine with a much lower operating cost because it consumes almost half the fuel of a tracked harvester,” explains Trottier.  Taking total costs into consideration, the Ponsse Fox, which retails at $550,000 all included, consumes 14 to 17 litres/hr when clearcutting or 10 to 14 litres/hr for thinning operations.

Façonnage MG
Born in a forestry family, Mario Gauthier has 38 years of experience in the industry. In 1996, he founded Façonnage MG, of which he is now co-owner with his wife, Hélène Martin and his son Charles Gauthier. With a diploma in finances from HEC Montreal, 32-year-old Charles has chosen to return to work in the forest and eventually take over the family business.

Today, the company has seven employees who work on a schedule of eight-days on and six days off on a 12-hour rotation.  Façonnage MG primarily harvests fir and black spruce 20 feet long for the Arbec de Port-Cartier sawmill. On the northern coast of Quebec, the terrain is rough with trees that are generally 20 cm in diameter. Average production is around 1800 m/cu per week and around 70,000m/cu per year. 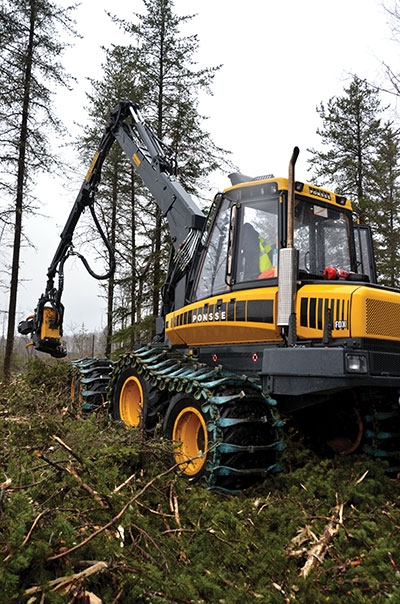