Most reading this know firsthand about how Canada’s forestry sector has undergone unprecedented change over the last 10 years. A perfect storm of factors – the high value of the loonie, reduced U.S. housing starts, stalled newsprint markets, rising energy costs, unprecedented global competition, the softwood lumber dispute – have together created recent industry conditions unseen since the Great Depression. Collectively, these factors cut industry employment by just less than half, from a high of approximately 260,000 direct jobs in 2003 to about 150,000 at present.

But the wood industry is resilient. Like its founding fathers – the men who helped give birth to this nation by toiling in the lumber camps from before dawn ’til after dusk – it’s a scrappy fighter, and on an upward swing again. However, just as the industry ramps back up, especially on Canada’s west coast, another set of thorny factors is rearing its ugly head. It’s turning out that recruiting the workers needed for the industry to hold its own, let alone grow, may be the biggest challenge yet.

One of the toughest challenges is the magnitude of expected retirements. More than half of the sector’s workforce is at least 45 years old. Based on current demographics as well as past retirement and attrition patterns, it’s estimated that during the next 10 years more than 50,000 workers will be gone. (These and other results are explained in the 2011 Forest Products Sector Council labour market report Renewing Canada’s Greenest Workforce - www.fpsc-cspf.ca/sectorstudy/) This 50,000 loss represents approximately one-third of the industry’s current workforce.

Adding 120,000?
In the most optimistic of future possibilities, Canadian forest product enterprises will need to hire as many as 120,000 new workers by 2020. Even if the sector only holds its own, its labour force demand will equal nearly 40,000 new workers within the same time frame. Millwrights, saw filers, technicians, machinery operators, scientists, foresters, engineers, electricians, IT workers, communications, sales – you name it, forestry will need it.

“We need a workforce mix that will allow us to maintain existing operations while also pursuing a program of innovative new products and expansion into new markets,” says Forest Products Association of Canada (FPAC) director of communications Monica Bailey. “We are actively working on this, as we know sector employers are already having difficulties retaining workers, attracting youth and recruiting new employees.”

FPAC is working with its members as well as other related players on a three-pronged initiative to renew the forestry sector – which is key to attracting the workers it needs. “Maintaining and growing this industry is about people, products and performance,” Bailey explains. “We need skilled people, we need to continue to create a diverse range of innovative products, and we need to keep improving the efficiency of our operations on all fronts. If we can communicate this reality – that forestry is a dynamic, cutting-edge and growing industry – it makes it easier to attract young people, women, Aboriginal people, new Canadians and more.”

More than money
It’s also critical to get the message out that forestry careers incorporate the values that many of today’s workers hold dear. “It’s not just about good salaries,” Bailey explains. “Even with high wages offered by the oil sands industry, it is having trouble recruiting because it has an image of not being environmentally friendly, and many of the jobs require that workers have to fly in and stay at a camp. Those things don’t speak well to the values of people today.”

Bailey says forestry offers “green jobs” within a renewable industry that’s concerned about the environment. “This is important to people because they want to be able to make a difference throughout their careers – they want to have a positive impact on the environment and on Canada’s future,” she notes. “We also offer great work-life balance in great communities, job security, great salaries, opportunities for advancement and a chance to innovate – all of which holds a lot of appeal.”

Bailey adds that many forestry sector companies also offer “amazing” perks, such as skills training, pensions and in some cases four-day work weeks. “We need to make sure young people, and those around them who influence their career decisions, clearly see the sector as a ‘first choice’ option,” she says. “This is especially true for the ‘in-demand’ occupations – such as trades and professions – where forestry is in competition against many other resource sectors.”

The range of jobs available in the sector is another point that FPAC is stressing. “We’ve found a lot of surprise among young people that we’re not just looking for skilled labour and of course people to do front-line work in the forest, but that we need people to fill corporate office positions in IT, HR, accounting and communications, and so on, and to fill tons of science-related positions, such as chemical and environmental engineers, geneticists,
biologists.”

To help achieve all this, FPAC has created a website dedicated to attracting workers called TheGreenestWorkforce.ca. It’s described as “a resource tool that provides information on the dynamic direction of the forest products industry and career opportunities on offer right across the country.”

“Even though there are jobs available, we discovered that young people were not aware of the positions out there, so this website really helps with that,” says Bailey. “It links to the ‘career pages’ on the websites of major forest product companies, and offers a Twitter feed with careers on offer right now.” She adds that the website has also been a very successful tool in reaching Ontario high school students through the Ministry of Education and high school teachers.

Finding new faces
Although the site is for anyone, it also seeks to attract females, Aboriginal people and new Canadians. About 85 per cent of current workers in the forestry sector are male. Aboriginal peoples already are well represented among the sector’s workforce, accounting for just over six per cent of the labour force compared to almost three per cent in Canada’s entire labour force – and forestry wants to build on that. The participation of Aboriginal people is strongest in silviculture, forestry and logging operations and in the four western provinces.

“Canada’s growing Aboriginal population represents one of the sector’s best hopes to fill positions,” says Bailey. “We want to build on the historical connection. First Nation peoples are showing continued interest in increasing their participation in the sector, and see the possibilities for long-term economic benefits for Aboriginal communities situated close to sector activities.” Effective, local models of partnership based on mutual co-operation and respect can do much to support these efforts, she notes. During 2010 alone, the Forest Products Sector Council (FPSC) held seven Aboriginal engagement sessions across the country.

The forestry sector makes limited use of immigrant workers – only 7.6 per cent compared to the national average of 21.2 per cent – so this represents a good source of potential candidates as well. As with youth and Aboriginal Peoples, making new Canadians aware of the jobs is critically needed – but ways to enhance worker mobility and flexibility across provinces and sectors is also necessary.

“Cross-skilling of workers provides benefits for the workers and the employer,” Bailey observes. “We’re also working on tools and techniques to improve knowledge transfer practices from older experienced workers to newer entrants, so that they can benefit from all that knowledge and skill.” Developing strategies to increase participation in apprenticeship is also key.

In addition to needing more workers, the FPSC report also suggests that new skills will have to be developed to support and grow the forestry industry, to be able to create new products and processes. Training programs must evolve over time, and essential skills profiles and competency maps must
be developed.

Getting the word out
To help “market” forestry careers, FPAC recently ran a “Green Dream Internship Contest.” In June, the winners began posting their personal reflections on their new forest sector careers on the GreenestWorkforce website, Facebook and Twitter. (FPAC also offers other awards, such as the Aboriginal Youth Skills Award, which last year went to a young woman looking at perfume derivatives from wood.)

Millar Western Forest Products of Alberta hired three interns this spring who were all entered in the contest. “We support all of FPAC’s efforts 100 per cent,” says Millar Western’s communications manager Louise Riopel. “It’s so important to get on the radar of young people choosing a career, and show that forest sector jobs are green and growing.”

Her company believes filling the forest sector workforce demand is going to take a multipronged approach. “We have to work on several fronts and tweak our strategies as we go along,” Riopel says. “There is no silver bullet.” In addition to working with FPAC, Millar Western is involved with the Alberta Forest Products Association’s “Work Wild” program that also seeks to build awareness of career opportunities in the forest industry. Furthermore, the company is looking at partnerships with organizations like Helmets to Hardhats, which helps Canadian military personnel transition to civilian careers, and a program based in Edmonton called Women Building Futures that prepares women for careers in the trades.

Millar Western opened a new sawmill at end of 2011 and has a bioenergy project starting up at its pulp mill next year. “We really need quality workers, just like companies in many other industries do,” Riopel says. “We have a strong economy in Alberta, making it especially hard to attract tradespeople. We must continue to advertise our strengths – that we offer competitive salaries and benefits, and also ‘green’ careers that are based on a renewable resource and located in dynamic communities that offer great quality of life. Our industry provides a healthy work-life balance, as well as opportunities for advancement and career longevity.”

No one can predict the future, but it is certain that swift, concerted and sustained actions are needed to recruit the future forest sector workforce, retain experienced workers and improve human resource planning. “Meeting these labour demands is a challenge that the sector is facing now to ensure that it remains a competitive and productive global industry,” says Bailey. “There is massive potential in new and emerging markets and in transformative bio-products. Canada is well positioned to capitalize on the strong global forest products recovery that’s happening now. There are so many options for individuals to have extremely fulfilling and exciting careers.” 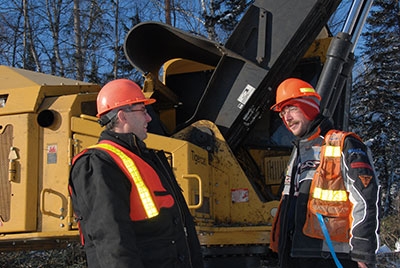 Mentoring and apprenticeship programs will be crucial in maintaining the industry’s collective knowledge level as today’s experts retire. Most reading this know firsthand about how Canada’s forestry sector has undergone unprecedented change over the last 10 years.
Print this page