For Rob Wrightman, president and CEO of True North Log Homes Inc. in Bracebridge, Ont., making the decision to go into the highly competitive log home business was easy. Developing a product that would set him apart from the competition was supposed to have been the hard part. But for Wrightman, achieving that competitive edge simply meant going back to basics and solving a long-term problem for the log home industry – gaps that are created when the structure settles and allows air into the home. 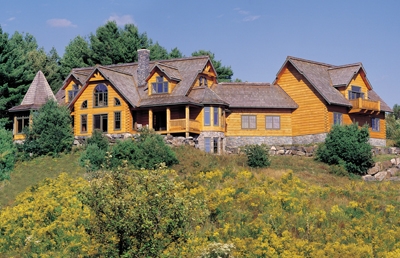 Wrightman, who has a self-proclaimed interest in technology, has four U.S. and Canadian patents in the works right now, including one for his new “Log Lock Thru-bolt” assembly system, which is a spring loaded, self-adjusting method of joining the logs together. “Two feet from every corner and between each door and window opening we factory drill a hole for a one–piece through bolt to be inserted at the time of assembly,” explains Wrightman when providing a simplistic description of the technology. “The bottom of the rod is flush with the bottom of the lowest log and then a 2,500-lb high tensile spring with two washers and a nut is installed at the top of the rod. When you tighten the nut, the spring pushes down, squeezing together the logs.” 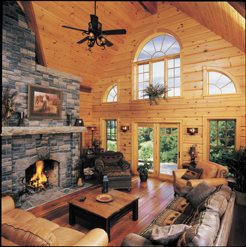 With other log joining systems, Wrightman says as the structure settles you have to go up into the attic of the home to tighten the bolts on a regular basis. With his  Log Lock system, the spring compensates for any movement in the home, keeping the joins tight at all times and allowing True North to offer the only 25-year “Zero” Air Filtration Warranty in the business. He says another advantage is the system’s “spring loaded action,” which makes the installation of the log joining system much more efficient. “In the average log building you will have about 40 rods,” he explains. “In the past, it would take two days to install all of the rods with two guys. Now, with the spring action, it takes half a day or less with one man.”

Following more than two years of development, Wrightman started installing the new “Log Lock” system in his company’s log homes earlier this year, but there is more to his log  homes than just steel rods, springs and bolts. “It’s also the quality of the materials we use, the workmanship, and the little things we do to make our product better,” Wrightman adds. “For example, we stand all of our cants vertically on edge to keep the faces clean, and when we store our logs in the yard, we position them so that they are facing the northwest wind, which allows the wind to go through the logs, creating a natural drying process.”

The manufacturing process at True North starts with the cants, which Wrightman selects mainly from lumber mills in northern Ontario and Quebec, but from as far away as B.C. if he needs western red cedar. Customers have a choice between the cedar and eastern white pine, while Douglas fir is used for most second-floor support systems. The cants, which are cut from the heartwood of the logs, range in length from 10 ft. to 23 ft. and in dimension from 6.5 in. x 12.5 in. to 12.5 in. x 12.5 in. These cants are then processed with a four-sided planer/moulder into what True North calls its “logs” as they are the product that is used to build the log homes. The planer cuts a tongue on one side of the log and a groove into another, while planing the two remaining sides.

True North keeps a tight rein on quality control by doing all of its own planing, using a planer that Wrightman’s father Ron bought from the now defunct west coast forestry giant, MacMillan Bloedel. “Our planer is accurate to within 1/5000th of an inch, meaning that our logs are perfectly square,” Wrightman says. “Once we bring the logs out of the planer, we coat all four sides with a primary coating of stain that includes a UV inhibitor and a mildewcide. Most companies only coat two sides and don’t coat the tongue and groove areas, but we feel this is a critical process as it significantly reduces the cracking and checking of the product.”

Once the logs come out of the staining process, they are moved into the on-site warehouse where they stay until the stain has been completely absorbed and the logs are dry. Next in the process is the computer aided manufacturing plant, which can produce the processed logs for a 2,000- square-ft. home in less than eight hours. Each log wall in the home is produced sequentially using computer generated cutting drawings. The plant has a series of machines designed and built by the senior Wrightman that includes dovetail and saddle notch machines for producing the joints, a sculpturing machine for making sculptured corners and a cutoff saw for trimming the logs to the desired length. “My Dad actually designed and hand built the machines and he even did the welding on some of them,” adds Rob, who says it was probably his Dad’s interest in technology and the business that got him so interested.

The Wrightmans have been in the log home business since 1979, which was when Ron started up a log home company that he ran for three years before selling it to a company that is now one of Rob’s competitors. “My Dad had to sell the company due to illness, but I was working for him at the time as plant manager, so I stayed on with the new owners once it was sold. I was apprenticing in carpentry at the time and I finished that up. I was with the company for five years in total, and then decided to make a career change and went into real estate sales.”

Although Rob did well in real estate, he says his heart was in log home building and when Ron started to get healthier again the pair joined forces as business partners, founding True North in 1986. “Basically, I built the factory while Dad worked to develop the machinery and equipment,” notes Rob. “He was involved until he retired in the mid 1990s and I assumed control of the company. Prior to his retirement, he was developing patents for various technology within log home building and I just continued on with that process. Today we have 14 patents in place and soon we will have 18.”

In addition to the Log Lock through bolt system, True North log homes built with larger logs (8 in. x 12 in. and above) feature a “Thermo-groove” six seal system that is designed to work with the tongue and groove system. It features two butyl rubber tape sealant beads and four asphalt impregnated foam gasket tapes. Rob says the Thermo-grove system enhances the thermal performance of the True North homes and significantly improves the sealing capabilities of the tongue and groove joints between the logs. Other technological advancements used in the True North homes include a unique patented butt spline assembly for butting logs together, and a penta-post corner system that allows for irregular angles in walls and window openings.

Another unique aspect of True North’s production is that the homes are only erected once, and that is on the final site. “Many log home manufacturers assemble the homes on their site and then number the pieces before disassembling and transporting the home to its final destination,” Rob explains. “That can be expensive, and it is a step we can eliminate because our computerized manufacturing process is so accurate. In addition, we use a digital inventory control system that monitors the log home from start to finish and assures the customer that everything will be on the trucks when they arrive at the building site.”

For True North, those building sites have been around the world, and include almost every U.S. state and Canadian province, Great Britain, Ireland, continental Europe, Mexico, Korea, Japan and even the Bahamas. “I found it unusual to be building a log home for a customer in the Bahamas,” Rob says. “But it did make sense for a couple of reasons. The Canadian exchange at the time made it cost effective, as did the reduction in on-site labour costs. In the Bahamas, they operate on ‘Island Time’ so having a house shipped in that just needed assembly saved time and money. We had to ship the home from our plant to Florida and then we put it on a barge to Nassau along with a tractor trailer and a crane, then drove everything down the island to the building site.”

Despite the current downturn in the economy, Rob says they are still busy. “Things are going well and we feel very humble and appreciative  of the business we have right now,” he acknowledges. “We did have a few customers that put things on hold due to the economy but most of them came back and went forward with their projects. It is actually a good time to buy because the interest rates are so low right now.”

Rob adds that True North recently won a U.S. National Association of Home Builders (NAHB) Showcase Award in the category of “Excellence in Marketing and the Presentation of Home Plans,” and that has helped the business tremendously. “We produced a new 200-page plan book that is packed full of plans, photos and information about the company, and being recognized for that by the NAHB and beating out more than 100 other companies for the honour has been a real shot in the arm for us.”

For potential customers interested in acquiring a log home, Rob says they offer a unique learning program every month that not only benefits the customer, but also helps the Hospital for Sick Children two hours south in Toronto. “We believe our best customer is a well-informed customer, so we offer a three-hour, hands on seminar at our Bracebridge plant that gives customers the opportunity to learn about our technology, different log species and what they need to do to if they want to build a log home. We charge $10 per person for attendance and then we match that $10 and donate the full amount to the Hospital for Sick Children. That has added up to just shy of $95,000 for the hospital to date.”

The customer seminars are held on a Saturday and then on the Sunday and Monday following, Rob says they offer a Builders Seminar where they spend part of the time actually building half of a log cabin. “These guys may never build a log cabin for a homeowner, but it builds awareness of our product, and that all helps in the long run,” he says. “That’s the thing I love about this business – almost everyone you talk to has an interest in log homes. I don’t know of any other business where that happens.