You won’t find sawmiller Kevin Sexton moping around his office these days just because of bad markets. Yes times are very tough, but Sexton, his wife Sue, and management team Neil Greening and Mike Buck have plenty of small and big projects on the drawing board. And they’re not talking about waiting until 2012 to get started either. The independent small-log stud mill in Bloomfield, NL, would like to get cracking soon. The big question mark is log supply. 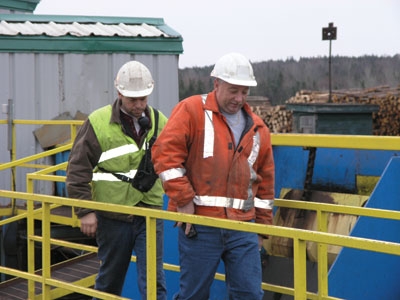 That’s a bit ironic in a province with nary a sawmill running these days, and a pulp & paper sector where mills are either shut (Abitibi Stephenville) or soon to be so (AbitibiBowater Grand Falls-Windsor). At this point, only Kruger’s Corner Brook Pulp & Paper (CBP&P) on the west coast seems to have a future. Still, if you know the history of the Rock’s forestry sector – big pulp & paper companies say jump, and government asks how high – Sexton’s log supply challenges are not at all surprising. For years the pulp mills have taken what they want here, and sawmillers are told to be happy with what they get. Currently CBP&P in western Newfoundland asks contractors to sort out sawlogs and runs chip exchange programs with mills like Sexton Lumber. In fact Sexton Lumber, based in eastern Newfoundland, sends over 80% of its chips to CBP&P despite the 500-km one-way trip.

For its part, the other major pulp mill on Newfoundland, AbitibiBowater in Grand Falls-Windsor, is struggling for survival and slated for closure this spring, a dilemma that apparently has made sawlog sorting by its cut-to-length logging crews impossible of late.

Originally the company was talking about the need for its woodlands operation to switch 100% to in-woods chipping, a move that would have made sawlog sorting a brief fling for this part of central Newfoundland. But resistance and rejection, by both government and unions, have forced AbitibiBowater to retreat. Still, even with the announcement that the mill will close, log supply remains an unknown for area sawmills, putting everyone’s plans on hold.

“Yes, it’s a little frustrating to hear the minister (Natural Resources) talk about the need to change the way fibre is allocated, and about a forest sector aid package, when as Newfoundland’s only major sawmill we can’t even run 12 months a year,” Sexton explains. “Don’t get me wrong – help is always welcome in rough markets like this. But I’ll tell you what. There’s a lot of fibre available but not being used, even all around us here. Let us have a crack at it, and we’ll handle the rest.”

Making it Work
In fact, they’re already handling it. The mill just two hours west of St. John’s cut 50 million bdft in its last fiscal year ending Nov. 30, all from small black spruce on a single HewSaw line. The sawmill itself was built in 2000, and benefits from a simple flow and modern, optimized equipment. All logs are delivered as 8-ft CTL stems that are unloaded and stacked as high as possible by a Liebherr 924. The elevated cab machine replaces an original wheel loader with a Paralift grapple. The move brought several benefits Sexton says.

“It has much less maintenance and downtime, and it allows us to stack the logs very high, so we’re concentrating the wood in a smaller area, closer to the infeed deck.”

Not that this was much of an issue when CWP was on site in early December. A very wet late fall was complicating an already dicey log supply. The mill yard itself was a muddy mess, but at least logs and lumber were moving. That was more than could be said about the woods, where not a single truck had moved in over two weeks. “We need a deep freeze fast, or we’ll have supply issues for sure,” Sexton says when I comment about the almost 10°C weather.

The Liebherr drops logs off on the infeed deck, which feeds two debarkers – A VK 17-in added new with the mill, and a Carbotech dual-ring added a few years later. “The Carbotech isn’t as neat or fancy as the VK, but it does a nice job nonetheless,” notes Sexton. 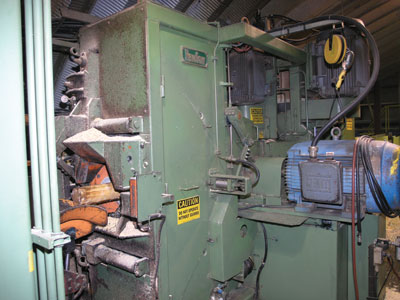 After debarking, logs are sorted for batch feeding. Originally a simple scanner for diameter sorting, it has been upgraded recently by Quebec’s ProLogic+ to full-profile scanning for solution sorting. Logs go to one of eight oversized log bins, where they are sent one pattern at a time to the mill’s only sawline – a HewSaw R200 MSA.  Just a few years after startup, Sexton decided to upgrade here as well, by adding an optimized log turner. The mill had some challenges in adding this after the fact, as the space was too tight for most off-the-shelf solutions at the time. They ended up going with a PHL Industries log turner with ProLogic+ optimization and controls. Like all such decisions, it had to make sense to controller Neil Greening before Sexton would make the move. 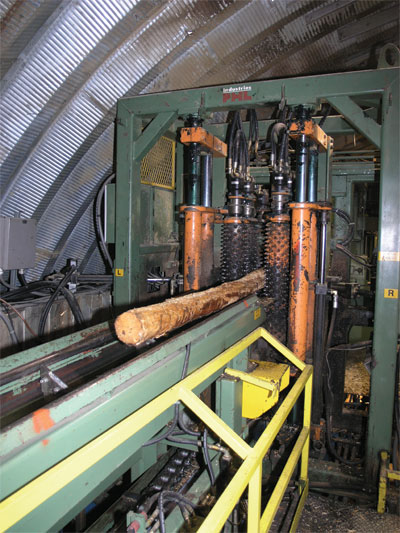 “I call Neil my Minister of Finance, and that’s basically what he is,” jokes Sexton. “He’s been a key part of the management team since the late 90s, and whenever we have a project like this, Neil sits down with myself, Mike (mill manager Mike Buck), and Sue, and we decide if it makes sense. But no matter how bad I want to do a project, if Neil doesn’t buy in, we don’t do it. There’s no point in having someone like him in charge of your money if you don’t take his advice, especially when he disagrees with me.”

Sound advice itself that would keep many a technically focused sawmiller out of trouble. In the case of the optimized log turner, Neil signed off, and wasn’t disappointed with the general results.

“We track most of the key numbers, but especially recovery, hourly, so we can measure the success of these kinds of projects,” Neil explains. “We also do a lot of our own testing, and we’ve had groups like Forintek come in and measure what we’re doing. It’s very important to have all those numbers. For starters, they are a huge help in negotiating performance clauses for new equipment, and in getting the suppliers to come in and make that extra effort to get what we paid for. In the case of the log turner, the payback was there – we can see it.”
Sexton adds that third-party mill-wide tests point to recovery figures that are well above average for an Atlantic Canada stud mill dealing with the size of logs he sees. With log rotation accuracy close to 98%, the upgrade plays a key role. Now, he adds, the challenge is to get production to where they want it.

“The target for that rotator is to be accurate at 550 fpm with three-foot gaps. Right now we’re running at 550 fpm, but to stay as accurate as we want, we’re at five foot gaps. But ProLogic+ and PHL know where we want to be.” 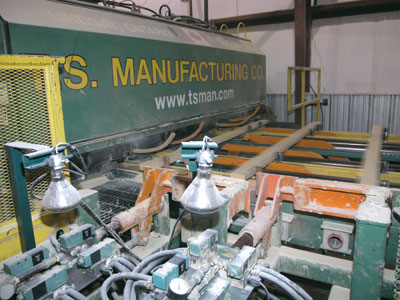 Lumber from the HewSaw joins lumber on the green chain from the mill’s only other breakdown system – a Tronco Industries reman edger that has also worked very well since the mill was built. Following a Carbotech multi-saw trimmer with Autolog optimization, lumber is sorted via a 10-tray sorter, also from Carbotech, and added after the original mill was built. After a Carbotech stacker-sticker placer, lumber is dried on site in two FEI-Wellons kilns powered by a biomass boiler, also from the same supplier. Hog fuel for the boiler is prepared by a CBI Grizzly mill, a rugged design that Sexton admits to “testing” at times.

The neat, single line mill flow has paid off for Sexton Lumber over the past eight years, but Sexton says with potential changes in fibre availability in the province, he’s looking at possibly adding another really small-log breakdown line.

“It’s hard to see where it’s all going right now, but some of the changes that may come would likely increase our volume of available pulp logs. We’re considering options for processing them into small lumber or squares here by adding a dedicated recovery line. But like so many things here, it’s on hold until we know about fibre supply.”

Phoenix Planer
Lumber is dressed on a completely new planer mill started in 2002 after the original mill was lost to fire. It is a turnkey install from Ontario-based TS Manufacturing, and Sexton says the supplier worked well putting the mill together. “It’s rugged equipment that has held up well all the way through,” he says.

Lumber piles are decanted on a tilt hoist to a long surge deck feeding pineapple speed-up rolls, all from TS Mfg. The planer itself is a rugged Stetson Ross rebuilt and motorized by Progressive Mill Supplies (now Progressive Machine Supplies). Sexton notes that it’s a small planer, and not ultra fast by today’s standards, but it’s more than fast enough to handle his volume on a single shift, is reliable, and provides a good finish. “It’ll top 1,500 fpm, but we rarely need much more than 1,000.”

As proof that not all decisions at Sexton turn out as planned, Sexton points to the mill’s planer optimizer. The mill was built without an optimizer, but one was soon added by a Quebec-based supplier that was bought out by Optifor, which in turn was sold to Gemofor, which in turn disappeared. The original optimizer was installed on a beta site loan agreement, but never worked properly. Soon after Optifor bought the smaller supplier, Sexton Lumber added an Optifor linear optimizer, but it too was plagued by problems and a lack of support.

“Neil can tell you what all that cost us – likely a quarter of a million, but I don’t really want to know. In the end, it never really worked for us until Jean Berubé of VAB Solutions got involved. I can’t say enough good things about them. They didn’t owe us anything, but they came in here, took ownership of that system, and made it work. It’d be on the bone pile with the first system if it wasn’t for VAB – it’s that simple.”

The supplier also installed its own invisible ink marking system at the planer outfeed and reader after the lug loader that has worked well. After a pair of offset TS Mfg. slowdown belts, lumber is singulated on a PLC lug loader for two split-level grading stations, another unit that has worked well in both planer mill and sawmill. Manual and optimizer decisions are married via VAB software, with decisions sent to a simple but effective TS Mfg. live fence. Two TS Mfg. trimmers, each with three saws, make the cuts ahead of a two-level tray sorter. The prime sort flows right to the TS Mfg. stacker and packaging line, while off sorts drop down via a flip gate to manual stacking stations.

The simple planer mill has worked well for Sexton Lumber, but here too the mill has plans. For starters, Sexton hopes to make the leap to a complete VAB Solutions linear planer optimizer in the very near future, and says the supplier is even talking about graderless operation down the road. “Everything we’ve seen from these guys tells us they’ll make it work if they commit, so we’re listening.”

The mill is also looking at more automation at the back end, in both stacking and wrapping. And Sexton has his eye on the bioenergy market as well.
“We’ve got plans for the future all right,” he concludes back in his office. With luck and a little courage, perhaps the province will also start looking at a bright future rather than the past.