December 2, 2015 - Mattey Bros. has been a staple for log and pole harvesting in B.C.’s Shuswap Region for more than 80 years. Dan Mattey Sr. started up the operation in 1932, harvesting trees for poles. The company currently employs between 40 to 45 people. 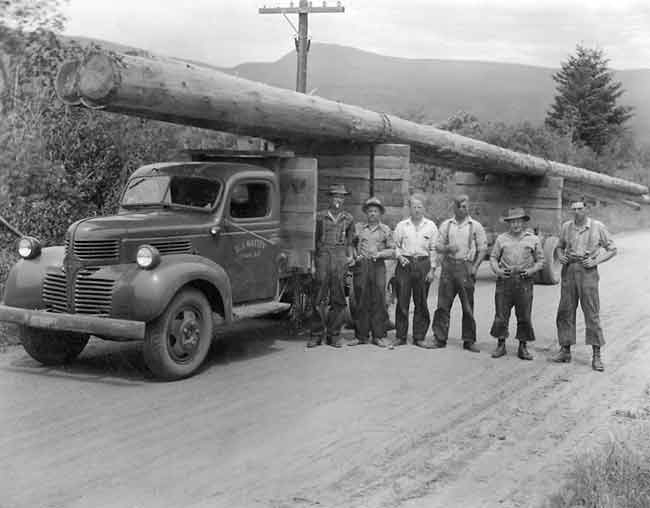 “I started in ’68 and Dad started in ’32,” explained Dan Mattey Jr., who is better known as Danny to his friends, family and co-workers. “He started in the pole business first then into the logging later.”

Mattey Bros. focused on harvesting poles until the 1960s, when its logging operation surpassed its pole business.

Danny was introduced to his forestry career earlier than most, checking out his father’s operations as a young boy. He says his father was his biggest influence for him choosing a career in logging. In 1968, he got his first official job in the sector driving trucks and hauling logs for his father’s business.

These days, Danny is usually found at the company’s head office in Chase, B.C., looking after his company’s shop. But he decided to drive out to Salmon Arm to offer me a tour of one of his company’s current harvesting operations in the Shuswap Region. Mattey Bros. typically has four or five operations running simultaneously. To get to the Salmon Arm site we turned off of the Trans-Canada Highway in Canoe and drove up 12 kilometres of winding dirt roads where his company was harvesting fir, spruce, hemlock and cedar.

“My foreman, Dale Becker, has been with me for 35 years and he basically runs the logging side of the business,” Danny says as we pull to the side of the road to let a truck hauling a full load of logs pass us. “He looks after most everything out here.”

A John Deere 2154D forestry swing machine equipped with a Waratah HTH622C harvesting head was processing long logs as we made our way onto the site.

The company harvests a wide variety of species using conventional methods with most of the logs harvested being sold to Canoe Forest Products, which trades them for cedar logs to supply its plywood plant in Salmon Arm, or to North Enderby Timber sawmill in Enderby, B.C. The majority of the logs harvested are long logs. A typical annual log production for Mattey Bros. is about 350,000 cubic metres.

Danny says his favourite thing about logging is the people he works with.

“I don’t know anything else so I guess I have to enjoy it,” he jokes. “I enjoy the people I work for and we have a good crew, so it makes it all worthwhile.”

When it comes to picking a prime location, being closer to home is his only real preference.

“When crews are away it’s harder for them,” he says. “Otherwise, I don’t have a favourite. If the wood is good, it’s good.”

Deere and Star powered
The majority of Mattey Bros.’ harvesting fleet is John Deere with the logs hauled off by Western Star trucks.

“We get good service out of John Deere,” Danny says.

“The 948 is the biggest skidder we ever had,” says Daniel Mattey, Danny’s son who helps run his family’s logging operations. “It pulls about twice as much as the 748s.”

The company also has an 870C Tigercat feller buncher, a LinkBelt log loader and a Volvo EC240 excavator at work in its day-to-day operations.

Mattey Bros. also sub-contracts out owner-operators to have an additional processor and an additional feller buncher in its regular lineup.

All the harvester heads for the processors are Waratahs, including three HTH622Bs and one HTH622C. Danny says he’s tried other harvesting heads and they’ve worked fine, but he’s worked with the Waratah brand for a long time and prefers to stick to them.

On the log hauling side of the business, Mattey Bros. has got 11 Western Star trucks on the move, including nine trucks for hauling long logs and two for hauling short logs.

Mattey Bros. has been harvesting in the Shuswap Region for more than 80 years. Dan Mattey Sr. started the operation in 1932

Economic hurdles
Any company that has been around more than 80 years encounters its share of hurdles, but the biggest challenge has been keeping everything going during downturns in the economy.

“Making sure you don’t go broke,” Danny says. “But all in all, nothing too drastic.”

Passing the torch
Danny’s plan is to hand the keys to the business over to his son, Daniel, who currently runs one of the company’s processors and supervises operations. This will mark the third generation of ownership within the family, most likely taking the business to its first centennial celebration.

“He’ll probably take it over in a while,” Danny says. “He’s been in the business quite a while now, too, about 15 years.”

Not unlike his father, Daniel joined the family business shortly after finishing up school. Although Daniel didn’t spend a ton of time out in the bush checking out logging operations as a child like his father did, getting involved in the business was something he always saw as a possibility.

“It was the family business so it seemed the natural thing to do,” Daniel says.

He says he enjoys the peace and quiet that comes with working alone or in small crews in the forests. When working in the woods, Daniel says the steep grounds tend to provide the biggest challenges.

When it comes to learning the various aspects of the family business, Daniel says he needs to spend more time in the office learning all the administrative duties. That said, he enjoys the woods more than being in an office.

Daniel’s 13-year-old son, Gavin, is also involved in the family business, working in the shop from time to time. Whether he’ll end up the fourth generation running Mattey Bros. is anyone’s guess.

A family affair
The original Mattey Brothers were George and Dan Mattey Sr. They learned logging from their father who worked at the Adams River Lumber Company from 1914 to 1925.

In 1932, the two brothers cleared land in Bear Creek, north of Chase, B.C., and started their ranching business. In that same year, Dan bought his first logging truck and started to haul logs and poles for Mattey Bros. and other small businesses in the area. Back then, the poles were shipped via rail and the logging was done by hand with horsed skidding.

By the 1940s they expanded to the Adams Lake and Momich area and had pole yards in Squilax, B.C., and on Shuswap Lake.

In 1940, an International T6 crawler replaced the horses for skidding. During the 1940s they moved their logging operation to the Ross Creek area where they had a portable sawmill.

In the 1960s the brothers parted ways with George focusing on the ranching and Dan on the logging.

Dan Mattey Jr. started in 1969, later becoming partners with his father until he retired at age 82 in 1996.

Over the years, Mattey Bros. has always supported the surrounding community in various ways from donating to the Chamber of Commerce, The Royal Canadian Legion, minor hockey and junior hockey, as well as other youth initiatives in the community.