For industries like Forestry that purchase a huge number of HD pickups, the past 12 months has offered a rich landscape of new iron.  The first out of that gate was Dodge when last fall they pitted the veteran Cummins engine against a completely new Ford Power Stroke and a revamped GM Duramax. 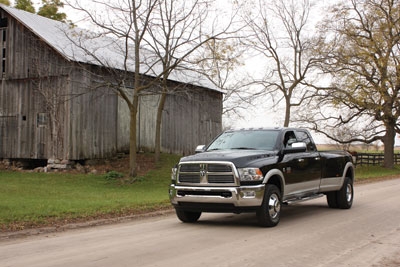 But powertrain is only one of the areas where the Big Three compete and this latest Ram has worked hard at plugging the holes in the Dodge lineup. First, by formally recognizing the importance of the “recreational hauler” market, and secondly by starting the line price walk at $700 less than last year’s base MSRP. 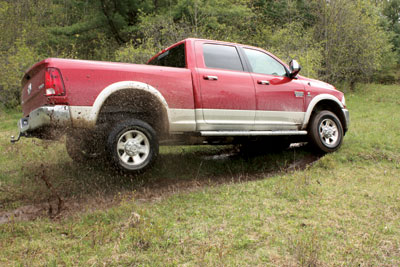 For the recreational hauler (and any business that requires real crew space) Dodge has finally added a large cab – which it simply calls “Crew”.  Industry-wide sales figures show that the crew cab option is chosen nearly 70% of the time by purchasers; frankly, it was just a matter of time before the Dodge boys introduced this option. But in addition to the Crew the unique Mega Cab is still available and posts a 15 to 20% take rate year over year.  The Dodge cab offerings can be matched to either a 6-foot, 4-inch or 8-foot cargo box. As for trim – there are four distinct levels – ST, SLT, SXT and Laramie.

Towing Capacity
This leads into the next important trait an HD truck must have: towing capability. This year, Dodge has joined GM and Ford in offering an integrated trailer brake controller, one with a nifty feature where the gain settings and actual braking action appear in the centre screen (between the speed and rpm gauges) as numbers and a bar graph. This saves looking down by your knee (where the controller is) and, because it comes on each time you brake, monitoring the efficiency of the system is the same as keeping an eye on your speed.

Power for the 2500-series and up trucks remains the veteran combination of the 5.7 L Hemi V8 (383 hp and 400 lb.-ft. of torque) or the 6.7 L Cummins I-6 Turbo Diesel (350 hp and 650 lb.-ft. of torque). These come with a six-speed automatic (with electronic range select feature) or six-speed standard (with ultra-low first-gear ratio) tranny. It’s the only standard transmission offered in an HD truck in Canada, says Dodge.

A standard exhaust brake introduced two years ago on the diesel slows the truck nicely on grades or while under load in traffic. In addition to saving of the vehicle brakes it safely controls trailers on long down hills and the sound is neither loud nor rude.

Test Drive
Currently, I have a long-term tester on which I’ve logged about 10,000 km so far. The truck is a 2010 Ram 2500 Laramie featuring the following specifications.

I recently used the truck to travel test a fifth wheel recreational trailer and I have the following impressions to offer on this truck.

The trailer’s dry weight of 13,200 lb. is certainly close to the 2500 Ram’s published limit – however, moving a load is never my greatest concern. Instead I focus on control and the stopping power of truck and trailer – and these last two were good.  Even adding weight (which, of course, would be the case with an owner’s unit), I still feel that the truck would be in control. There is little deflection between the front and rear axle – steering was firm and responsive – and while yes, the truck was working hard, that is what it’s meant to do.   Here is something else to consider; apart from the weight-bearing chassis and suspension of the truck, the safety of the load is directly attributed to three systems. One is the integrated brake controller that has a readout and gain adjustment at your left knee.  It has no lag, can be set up to be very aggressive and also has a manual switch that allows it to be actuated separately if necessary. Second, the Ram comes equipped with an exhaust brake that, along with the manual gear selector right on the shift lever, makes long down-grades safe to navigate without riding the truck brakes. And, the third feature is the tow/haul setting that adjusts the transmission shift points to maximize torque. Interestingly, I never use this because the Cummins has tremendous torque – however, with this load, yes I did – and it was helpful.

Lastly, I easily kept up with traffic, could accelerate uphill (slowly) and handled on-ramps without holding anybody up. Another feature of the Dodge I really like is the mirrors. In the down position, they are decent for most loads; however, when flipped up (to resemble what back in the day we used to call “west coast” mirrors) they offer a great (and tall) view of the trailer right up to the roof. Large moveable convex mirrors on the bottom of each mean no lane change surprises – everything is visible. 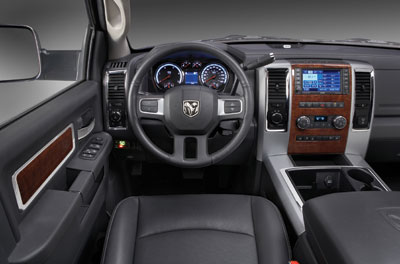 My fuel averages to date (on the truck while empty) are 14 L/100 km mixed city/highway driving; while long-distance highway use drops that number to about 12 L/100 km.  For a load, such as the fifth wheel I pulled, the truck averaged around 22 L/100 km – again on mixed driving.

My tester was also equipped with the Mor/Ryde pin box, which I’ve used before and really like because it eliminates the bang and lurch of fixed fifth wheel pins. This reduces shock-load to every component on the truck and trailer – not to mention just making for a much nicer ride.  The “reach forward” location of this pin meant that my 6’4″ box could easily accommodate the properly located fifth wheel in the bed of the truck and that the nose of trailer cleared the rear of the Crew Cab truck with several inches to spare. In fact, I could jackknife the truck and trailer to more than 90 degrees if I wanted to – a handy feature in tight quarters and, because it cleared the cab even at extreme angles, one less thing to remember when manoeuvring.

Howard Elmer is a truck, SUV and ATV journalist based in rural Ontario. He wrote this report for CFI magazine.