Oct. 24, 2013 - Nearly three decades have passed since the last outbreak of spruce budworm in the vast conifer forests of eastern North America. With budworm on the rise once again in Quebec and threatening to spread through spruce and fir forests from Ontario to Atlantic Canada, Natural Resources Canada’s Canadian Forest Service is leading a diverse task force of scientists, woodlot owners, and industry to review current knowledge and develop possible strategies to contain the looming epidemic.

Spruce budworm outbreaks have a lengthy history in North American forests. Evidence from stunted tree growth rings in ancient spruce suggest around 11 outbreaks during the last 450 years – the fossil record indicates an outbreak history that may reach back more than 8,600 years. These outbreaks have occurred with surprising regularity, roughly every 30-40 years, with three major outbreaks occurring in the past century.

With so much time since the previous outbreak, it may be timely to recall the full magnitude of damage that can be caused by spruce budworm. High densities of larvae consume all available new foliage, leaving fragments of decaying needles and giving forests a characteristic rusty, red-brown hue. At the peak of the previous outbreak, an estimated 51 million hectares of forest across eastern Canada had suffered moderate to severe defoliation associated with budworm feeding. By the late 1980s when the populations crashed, approximately 18 million hectares of dead or dying trees were reported – an area nearly 2.5 times the size of New Brunswick.

The current spruce budworm outbreak in Quebec is located mainly along the lower north shore region of the St. Lawrence River. This outbreak was detected in 2006 over a 3,000-hectare area and has doubled almost every year since. As of 2012, moderate to severe damage was reported in over 2.2 million hectares. So far, budworm densities have remained low south of the St. Lawrence, but provincial surveys by the New Brunswick Department of Natural Resources indicate a gradual but steady rise over the past few years.

In 2010, spray operations to protect foliage were initiated by the province of Quebec in collaboration with SOPFIM (Société de protection des forêts contre les insectes et les maladies). The only control measure approved for suppression of budworm in Quebec is a biological insecticide, Bacillus thuringiensis kurstaki (Btk); chemical insecticides are no longer used. According to SOPFIM scientist Dr. Richard Trudel, the area treated with Btk in 2012 was about 98,000 hectares of the most high-value forests, which constitutes about two per cent of the total
infested area.

A major challenge for any future spruce budworm spray program will be the high cost of treatment. Application costs have ballooned from $4-10/hectare in the 1970s and 1980s to more than $65/hectare as of 2012. Studies are still investigating the potential use of other control measures, including the registered insecticide Mimic (a hormone that causes early moulting) and pheromone-based mating disruption. Whatever tactic is chosen, high treatment costs are likely to preclude a spray operation of the scale seen during the previous outbreak, which between 1985 and 1990 covered nearly 2.8 million hectares in eastern Canada.

Much of what we know of budworm management has come from research spearheaded by scientists of the Canadian Forest Service (CFS). Many of these scientists advocate a budworm treatment strategy based on the insect’s population dynamics. Past research has suggested that spruce budworm rises synchronously throughout the region, with pockets of particularly high damage caused by relatively fast-growing populations. A spray program based on this population growth model would be used mainly to protect trees in high-value stands by knocking down large, fairly localized populations before significant damage occurs. Historically, this has been the main approach used.

Recent studies have provided tentative support for an alternative model of population growth. The evidence suggests outbreaks may spread from localized, high budworm density “epicentres,” providing a wellspring of dispersing adults that boost surrounding populations. If this model is confirmed, it could provide an “early-intervention strategy.” Treating apparent epicentres early in the outbreak could slow the spread of budworm. However, more research is needed to validate this approach, and to address logistical questions, such as when, where and how early intervention might be implemented, how to forecast the initial rise and subsequent spread of outbreaks and whether such a strategy would be less costly than alternatives.

Research to examine this early-intervention approach is underway in the Lower St. Lawrence region near Rimouski, Que. The project is being led by CFS scientists from the Laurentian, Atlantic and Great Lakes Forestry Centres, working closely with provincial foresters, private landowners and several industry partners (SOPFIM and Forest Protection Ltd.). This collaboration represents a positive first step towards improving the management of spruce budworm in eastern Canada. 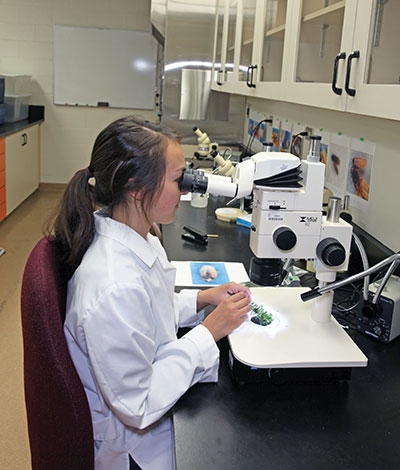 Kimiko Mosseler processes budworm shoot at the Atlantic Forestry Centre in Fredericton. Nearly three decades have passed since the last outbreak of spruce budworm in the vast conifer forests of eastern North America.
Print this page