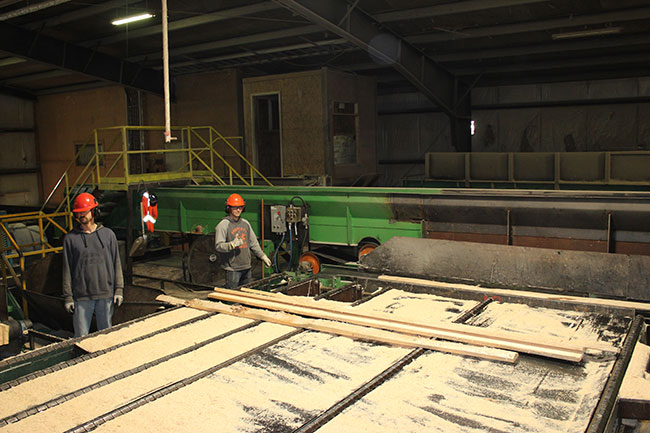 Lumber goes through a combo edger or a PHL 10-inch double-arbour gang edger, and then on to the trim line.

Tucked away in Hines Creek, Alta., sits family-owned Zavisha Sawmills. With a population of 396 people, Hines Creek is a village in northwestern Alberta that is likely unknown to many of our readers. The community relies largely on the forestry, agriculture and oil industries. A key part of the community and economic driver is Zavisha Sawmills.

Zavisha Sawmills can trace its history back to 1943, when Henry Zavisha began the business in the bush with eight to 10 employees, using a steam engine. In the mid-1960s, Henry moved operations to Hines Creek. Since then, the family and the business have grown, and three successive generations have led Zavisha Sawmills to success.

Henry Zavisha’s grandson, Greg Zavisha, now sawmill manager, tells CFI that the mill has seen a lot of change over the years. Having weathered 85 years of ups and downs in the industry, the Zavisha family understands adaptability and efficiency is key.

The biggest changes have happened in the past 15 years, Greg says, as automation has become increasingly important in order to maximize fibre recovery from tightening log supplies in northern Alberta. Fifteen years ago, the mill had a two-saw scragg and a headrig, but next to no automated machinery. Over the years, the mill has successfully adapted and optimized used machinery to fit their needs.

For example, when a fire took out the mill’s large-log line (a two-saw C-frame) and board edger in 2014, the family rebuilt, sourcing a 2005 canter line from a mill in Canoe, B.C., which they upgraded.

“It was equipped with a twin-band for breakdown at the primary. We removed the twin band and converted it into a quad saw box,” Greg explains. “USNR helped us with the project; they provided the mechanical controls and optimization.”

Since then, Greg says the sawmill has seen production increase annually. The mill now produces 30 mmbf annually. A tree-length mill, the maximum log size is 19 inches, and it produces lengths from eight to 16 feet.

“The smallest product we produce is a 1×3; the largest is a 2×10. We also do timber products from 3×3 to 12×12,” Greg explains. Approximately 95 per cent of these products stay in Canada with the remaining five per cent heading to the U.S.

Challenges
Despite the mill’s limited market reach in the U.S., the company feels the impact of the recurring softwood lumber disputes between Canada and the U.S. “When the U.S. market alters or changes, Canada becomes a dumping ground and it changes what we do here,” Greg says.

Lack of fibre supply is also threatening the company’s growth. “We’re currently on a quota system,” Greg explains. “In our area right now, we have Mercer, Canfor and ourselves operating. Availability for more fibre for us to grow really isn’t there.”

In recent years, there has been a lot of mountain pine beetle in the northwest region of Alberta, which has provided a steady fibre supply for the mill. But this supply is dwindling so Zavisha has added aspen to its species mix of spruce and beetle-killed pine.

“Aspen was a trial we did three years ago now, just trying to source good fibre that has value on the open market that we can add to what we do here,” Greg says. “In order to afford optimization and curve saws and everything else, you need a certain amount of fibre to go with it.”

The company gets most of its wood from Natural Forest Development, a local logging contractor, as well as incidentals from Peace County Ventures. They also get some supplemental volume through trading with Mercer (previously DMI), with whom Zavisha has fibre supply and chip agreements. 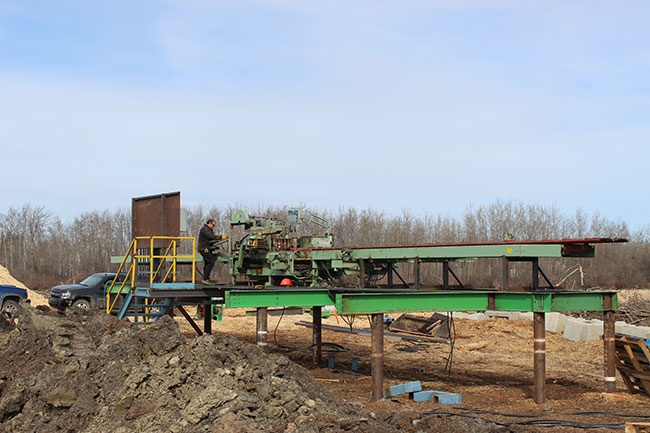 The new KARA Master portable sawmill is being assembled at Zavisha Sawmills.

Fully-automated
To continue growing in the face of such challenging conditions, automation and efficiency is crucial.

“We have an automated canter line, an automated board edger, trim line – everything’s basically fully automated in the mill as of right now,” Greg shares.

First, the logs go through a 27-inch Nicholson A5 debarker, and then to a custom-built cut-off saw. The lumber is then manually put on a conveyor belt to the mill.

“We have the option to kick logs out, so it’s somewhat of a log sort, and anything that isn’t kicked out goes directly to a log bin, which feeds the mill,” Greg explains.

The log bin feeds the step feeder into the canter line – a double-length infeed, quad arbor saw box for breakdown, with conical chip heads, which, as previously mentioned, USNR helped modernize by providing the mechanical controls and optimization. Then the logs go through one of two edgers: a combo edger, which is also the mill’s board edger, and a PHL 10-inch double-arbour gang edger. After the edger, it’s off to the trim line. The trim system has 44 bins.

Lumber then heads off to the kilns – Zavisha has a Mühlböck dry kiln and a Wellons dry kiln. Afterwards, the lumber goes to the planer mill, which features a Stetson Ross planer, a grade mark reader, Carbotech trimmer and Signode lumber strapping machine.

The majority of this equipment is from USNR. “USNR is all of the automation in the mill – they do the trimmer, the edger and the log line,” Greg explains. “The combo edger is actually a USNR/WaneShear collaboration.”

Zavisha didn’t go out of their way to focus on USNR. It was “just the way the stars aligned,” Greg says. “When it comes to operations, automation, at the end of it, USNR provided really good support, and good pricing. They’re kind of the industry standard when it comes to equipment for northwestern Canada.”

For tech and parts support, as well as mechanical help, the company turns to the USNR Salmon Arm, B.C., division. “Everything is as good as it gets,” Greg says.

New projects
While automation has helped improve the mill’s efficiency, the company is also looking at an old-school solution to boost their production capacity: a portable sawmill. When CFI toured the mill, Zavisha was in the process of assembling a KARA Master portable sawmill, which was sourced from a sawmiller in the Wembley, Alta., area.

According to Greg, the portable sawmill will help Zavisha handle larger logs. Previously, a contractor would process oversized logs for the mill, but the contractor recently passed away, and the mill wasn’t able to outsource this process again. Consequently, Zavisha turned to a portable sawmill, which they will run as a stationary headrig for logs over 19 inches.

“So, now we’re just in the process of installing it, and that way we’re capable of processing everything that comes in,” Greg says.

“In the grand scheme of things, it’s a relatively small project, but it does give us the capability to produce more products,” he continues. “We used to supply a lot of timbers, 12×12, 10×10 and 3×12 as well, so it’ll give us the capability to do that again.”
A much larger project is also in the works for Zavisha Sawmills: expanding the mill to house a six-inch curve saw from CAE (now USNR). As with previous projects, the curve saw was bought used, this time from a sawmiller in The Pas, Man., and will be modernized to fit their needs.

“We’re looking at bringing it in, re-doing the controls, optimization and actually doing some upgrades on the press rolls, working with AMS Solutions, a controls company,” Greg elaborates. “We’re working with engineers, getting layouts set up, getting drawings figured out, and the contract fees when it comes to the optimization controls, mechanical controls and all of that.”

Greg says they hope to complete the project by October, and expect to see return on investment after approximately 14 months. 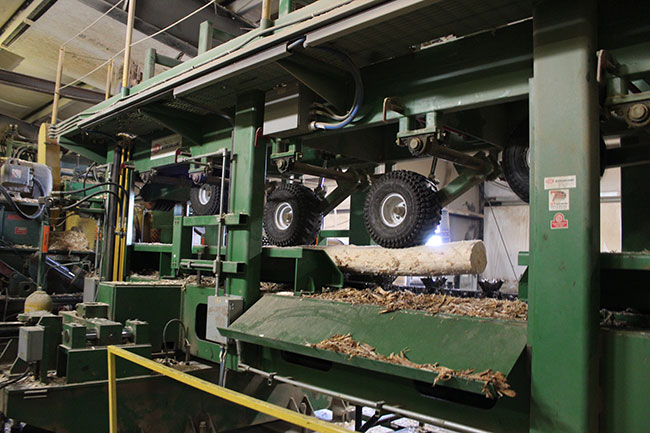 Environmental efficiencies
Efficiencies at the mill go beyond equipment – the company has also focused on conserving energy to reduce their environmental impact.

“Almost all of our systems run off variable frequency drives; some of our systems have energy conservation built into them,” Greg explains. “We also converted a lot of our lighting into LED. I think over 90 per cent of the mill has been converted, including both the mill and planer.”

The Mühlböck dry kiln, which was installed last year, also has added efficiencies – a heat recovery system. “So, when the kiln vents, when it dumps moisture and heat out, it recovers as much heat as possible and re-uses it in the drying process,” Greg explains. “It was an addition that we paid for that shows our commitment to energy conservation.”

The family is also committed to sustainable forest management. The mill is Sustainable Forest Initiative (SFI)-certified, which means it goes through SFI certification every year. “This requires a third-party audit, and we follow all of the rules, restrictions and guidelines,” Greg says. “Anything that is harvested obviously is replanted, reforested.”

Future outlook
Sustainability is very important for Zavisha Sawmills – not just for the environment and forests, but also for the Hines Creek economy.

“We really want to have a strong foothold on this area,” Greg explains. “We are the biggest employer in the region. Hines Creek is very dependent on the people we employ.”

But the industry is “somewhat shaky” right now, Greg admits. The limited fibre availability, as well as the ever-growing threat of wildfires and, more recently, the emerging challenge of caribou protection, means that efficiency is more important than ever for the mill.

“In the short term, there are a lot of issues we’re battling, a lot of which are in the political landscape,” Greg explains. “But I think long term, big picture, the industry is promising.”

CORRECTION: The printed version of this article incorrectly states that Zavisha Sawmills turns to a USNR dealer in Salmon Arm, B.C. The online article has been updated to reflect that USNR has a division based in Salmon Arm. CFI apologizes for the error.