When McKay Hodgson began logging in the 1960s, his tools of the trade were a horse and a chainsaw. It was a simple operation and as a young man getting his start he never dreamed of where this business would take him. But today, with McKay still at the helm as president, and his four sons and two daughters-in-law running the day-to-day operations, the company has grown into Hodgson’s Chipping, one of Nova Scotia’s largest logging contractors. 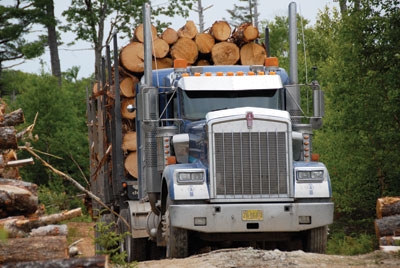 When McKay Hodgson began logging in the 1960s

“When I first started out I would work with one other logger and we would hand fell the trees and then pull them to roadside with the horse,” explains McKay, who grew up in Country Harbor, N.S. “A self-loading log truck would then come along and take the logs to the mill for processing. It was that simple.” 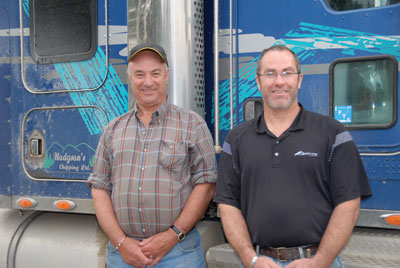 The workflow changed in 1970 when McKay bought his first machine, an Ontario-built Timberjack forwarder. Over the next 15 years the business grew with McKay purchasing additional forwarders and employing large manual crews for harvesting the logs. But it wasn’t until 1987 that he really started to move into mechanized harvesting. That was the year he picked up a Denis rail delimber and it was also the year his eldest son Vaughn joined the company.

The Chipping Route
Vaughn had been working as a mechanic at a local truck dealership but decided to bring his mechanical skills to the family business, which turned out to be a good move. It wasn’t long after Vaughn started that the Hodgsons purchased their first chipper. It was a Peterson 5000 prototype – the first of its kind ever built.  It was brought into the area to do work for the local Scott Paper mill, but when the chipper first arrived and the mill had a few issues with it, they offered it to the Hodgsons. “We like a bit of a challenge and the people at the paper mill were aware of that so they came to us and asked if we were interested in it,” explains Vaughn. “We jumped at the opportunity, and although it took a lot of modifications, we got it running the way we wanted and we are still using it to this day.”

The Scott Paper mill that encouraged the Hodgsons to get into the chipping business is still one of their biggest customers. The mill, which is located at Abercrombie Point near New Glasgow, has gone through several ownership changes since 1987 and has operated under the management of Kimberly-Clark and Neenah Paper before the latest change last year that saw the Northern Pulp Nova Scotia Corporation take over the facility.  Through all of the ownership changes, the Hodgsons have continued to deliver wood fibre to the mill, and today, in addition to supplying chips for the pulp-making process, they also supply wood fibre for the mill’s biomass powered energy program.

Vaughn credits Jamie Stalker, an employee at the Abercrombie mill, for getting the Hodgsons started down the chipping road and for playing a key role in developing the chipping program at the mill. “Jamie was one of the driving forces behind the development of that first chipper and it coming to Nova Scotia,” explains Vaughn. “He also saw the need for the development of a Peterson grinder that could handle the waste from mechanized operations and turn it into a viable product – energy.  Without Jamie’s hard work and dedication to Scott Paper and the other companies that have operated the mill over the past two decades, we may not have had the opportunity to work with these products in this province. Unfortunately, Jamie passed away last year before he saw the grinder reach its full potential, but we have to say that without his vision, we wouldn’t be as far along in this program as we are.”

Diversification
Along with the work they do for Northern Pulp, Vaughn says they are currently doing test runs on-site with a chipper and a grinder at the New Page paper mill at Port Hawkesbury, which is located on the Cape Breton side of the Strait of Canso, a body of water that separates Cape Breton Island from mainland Nova Scotia. They also run a biomass product that goes to Brooklyn Energy in Liverpool, N.S. and is used for energy and steam for a local pulp mill, do some grinding as needed for Enligna, a wood pellet producer in Musquodoboit, N.S., cut sawlogs and stud logs for several local sawmills, and harvest pulp wood for some local chip plants.

Vaughn says they typically run five sides between chipping and logging operations. He adds that they will probably harvest about 300,000 tonnes of wood this year. “Last year we did about 275,000 tonnes,” he notes. “This year, we have an additional feller buncher working so we have a bit more capacity, but we are not going full out because of the downturn in the markets.” 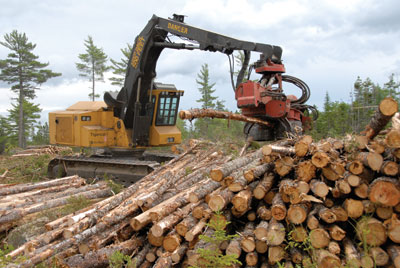 The newest buncher is a Tigercat 860 carrier with a 5400 Tigercat hot saw, which joins three other similarly equipped 860s that were already in the Hodgson fleet. They also run another four 860 carriers with processing heads. Three of the heads are Levesque designed Quadco L240 models, while the fourth head is a Hornet. The Hodgsons are very familiar with the L240 heads and actually tested the prototype for the model when it first hit the market in 2004. For the type of wood they handle, including the mix of hardwood and softwood in their operating area, they have found the L240s strike a good balance between weight and performance. And as for the carriers, Vaughn says they like to start the 860s off as feller bunchers and then switch them over to processors once they have some hours on them. He says processing is less demanding on the machines so it makes more sense to use them for the heavier duty felling work when they are newer.

For moving the logs to roadside, the Hodgsons have three Tigercat 18-tonne 1065  forwarders and five skidders – two Tigercat 620 models, a Tigercat 630, a John Deere 648 and a Caterpillar 535. The mix of forwarders and skidders works well, as the forwarders can move round wood to the roadside for pickup by a logging truck, while the skidders can play a dual-purpose role, either moving logs to roadside, or taking them to the chipper in the bush chipping operations.

For chipping, the company is an all-Peterson show, running the original 5000 prototype they picked up from Scott Paper, along with F, G, and H models. The single grinder they run is also a Peterson and is a 4710B model. McKay says they are working with Peterson right now to develop some new products that will be ideal for the local conditions, but he adds that it is too early to go into the details.

Planning and Sorts
With multiple end uses for the logs, Vaughn says the harvesting process can require a great deal of planning, especially on a block that may have sawlogs, pulp wood and biomass

material. “Sometimes we use a double tier diameter sort,” Vaughn notes. “The first sort is the merchandisable wood – studs and logs, while the second sort is full trees for the chipper. We will skid the tree length up to 300 metres, while anything over a 300-metre haul is processed random length and then forwarded to roadside for the chipper along with any un-merchandisable wood that needs to be ground with any chipper waste.

It’s a little different on a chipping-only site, where Vaughn says they will “cold deck” small stems to be used for biomass and will chip everything else. “We really have two sorts on these sites, full tree softwood for chips and one for the biomass material and the waste from chipping, which we will process later with the grinder.

To move all of the wood they harvest and process, Hodgson’s Chipping runs a large fleet of Kenworth trucks, numbering in the mid 20s. But for the Hodgsons the trucking business took on a whole new meaning recently as in mid-July they acquired the Kenworth dealership for Nova Scotia, which Vaughn says will be a good fit. “We were 100% reliant on the forest industry and this gives us a way to diversify while still staying very connected to our roots in logging,” he explains.

In addition to growing in the equipment and asset departments, the company has also grown significantly in the area of human resources, having as many as 85 employees at peak times. “Right now, we are running with about 70 people,” Vaughn notes. “I have to say, our employees really make the company. We have some great people working for us, many of them long term, and in any organization the employees are the backbone. I really believe you are only as good as the people you have working for you and we have some of the best.”

Family Work
For the family members working in the company, Vaughn says everyone has taken on a major role and provides support and input in their particular area of expertise. Vaughn is the general manager, while his brothers Roger, Paul and Dale are the business development manager, chipping supervisor, and woods operations manager respectively. Vaughn’s wife Ellen along with Dale’s wife Debbie manage the office, which is at the company’s large shop and equipment storage yard near Truro, N.S. Several other nephews and cousins also work in various areas of the company.

Vaughn says having Hodgson’s Chipping controlled within the family makes it easier to react quickly to market changes. “In my mind, if you can make decisions quickly, you can adapt quickly to the marketplace. That has been really important over the past couple of years because we have had to work closely with our customers to make sure they can survive during these tough times.  It’s really a two way street. If they survive, we survive and vice versa. I’m really hoping that when things improve, our willingness to work with our customers during the tough times will work to our advantage in the good times.”

Down the road, both Vaughn and McKay say they see a trend towards more chipping, especially for biomass. “We are already chipping hardwood for local biomass production, which in the past was only going offshore, and we are getting more into species such as juniper and poplar, which there just wasn’t an appetite for until now,” Vaughn says.  “Everyone is in survival mode right now, but we see big volumes of chipping in the near future and we hope to be well positioned to take advantage
of that.”