Common wisdom dictates that to become the biggest player in any endeavour, you have to focus on the big picture. But for the father and sons team that makes up Clusko Logging Enterprises in the B.C. Interior, the reverse was true. “We’ve always focused on the details, the small stuff that cumulatively makes a big impact, and basically kept our heads down doing the best job possible,” says Jared, the youngest of three Bremner brothers.

One day Jared, 31, Ryan, 33, Troy, 34, and patriarch Arnold Bremner looked up “and realized we were the biggest logging contractor in the province,” says Jared. “It was a bit of a strange feeling, because we’d been way too busy to see the big picture.”

With a main base of operations in Prince George and secondary operations in Williams Lake and Kelowna, Clusko Logging’s 160-man workforce, armed with an equal number of equipment, harvests a total of 1.4 million cubic metres annually, with 800,000 of that figure coming from the Prince George region. The Kelowna operation, which was launched only a year ago, accounts for 250,000 cubic metres annually. “In fact, we exceeded our annual harvesting obligations this past year and logged 1.5 million cubic metres, which was great,” notes Jared.

That’s a far cry from when Arnold, now in his mid-50s, and his wife Imke launched a trucking firm in Williams Lake in 1979 with only one rig to their name and plenty of worries about whether they could make ends meet. “We built the business from the ground up,” he recently told the press. “After we bought our first piece of equipment we would wonder where the next paycheque was coming from so we could buy food for the kids.”

Key next-gen
From the kids’ perspective, the life of a logger couldn’t have been more fulfilling. “Troy early on exhibited a real passion for operating equipment, and it’s something that has grown even stronger over the years,” says Jared. “We loved the outdoors, being in the bush, so we were the typical offspring of loggers who helped out whenever we could.” A fourth Bremner offspring, Jessica, chose an alternative career path: she’s currently completing a degree in physical therapy, an occupation that Arnold points out only half-jokingly could benefit Clusko’s crew should she choose to work close to home.

But as a teen, Jared didn’t imagine he would make a career of logging let alone preside over a firm that, just recently, informed a prospective mill it could expect 45 truckloads of wood daily. “Growing up we were all crazy about playing hockey, and my goal was to be an NHL player,” he says. The ambition wasn’t entirely misplaced: Jared and Ryan earned scholarships to play hockey in university; but the lure of logging eventually pulled them back into the fold. “I graduated from NAIT in 2005, by which time I realized a career in forestry was in my blood,”
says Jared.

Meanwhile, Arnold had grown the company throughout the 1980s and 1990s by working for clients such as Lignum and Riverside Forest Products, acquiring equipment such as a loader, feller buncher and skidder, and hauling up to 12 loads daily to regional mills. Annual harvest rates grew steadily, from 60,000 cubic metres to 350,000 cubic metres, and the 100 per cent stump to dump operation focused (then as now) mostly on pine and spruce, for processing as studs and dimensional wood.

Perhaps more importantly, an operating philosophy had also been firmly established. “My dad has a saying: `A clean show is a good show,’ and he drummed this into all of us,” says Jared. “On one level it applies to his passion for keeping our fleet spanking clean – he’s a real bug for washing equipment and keeping everything tidy. But on a deeper level, it means keeping a clean operation: finding and retaining the best people, which we’ve done; treating them and our clients fairly and openly; and bringing the best possible wood without any defects to the mills.”

For a company that runs double shifts on most of the machines, treating crews fairly and openly means (in addition to safe working procedures and good wages) an emphasis on weekends off. “It may sound trivial, but family is huge for all of us, and it’s imperative our crews stay actively involved in their personal lives,” says Jared. “They return to work with their batteries fully recharged every Monday, ready to put in a productive work week.”

For his part, Jared, an avid motocross racer in summer and snowmobiler in winter, manages to combine pleasure with business during his weekends. “I’ll go and inspect cut blocks on my snowmobile or bike,” he explains. “My girlfriend thinks I’m a workaholic, but I don’t see myself as such – it’s just what it takes to keep the business operating at peak efficiency.”

Crossroad time
The same year Jared graduated from NAIT, Arnold gathered his family together and told them he had reached a crossroads: it was time to either get out of the business or expand. “We understood that dad was starting to think of things other than being in the bush, but for us it was a no-brainer: we wanted the company to continue evolving,” says Jared. “Ironically, the recession gave us ample opportunity to do so, because the hard times prompted many players who were nearing retiring age or thinking of switching careers to sell. So we bought out other contractors and broadened our annual harvest volumes.”

When asked if this wasn’t somewhat of a risky move, Jared replies, “Yes, but we purchased the contracts that made sense to us – we didn’t buy just for the sake of buying.”

The brothers formed their own companies to subcontract for Clusko: Jared has Jareco Holdings, while Troy formed Troyco Enterprises in Williams Lake and Ryan moved to Kelowna with Northface Ventures. “Our reasoning was that we wanted to establish ourselves, be responsible for our own operations and build our reputations accordingly, rather than simply taking over the family firm – which wouldn’t happen overnight anyway,” says Jared. Indeed, none of the Bremner brothers think Arnold will ever truly retire. “I guarantee at the very least he’ll stop by every day to make sure everything’s going OK,” says Jared with a laugh.

Today, the Clusko inventory totals 163 pieces of equipment, and since the recession the Bremners made a conscious decision to slowly transition to 100 per cent John Deere equipment. “Deere is an extremely reliable brand, but apart from that the company, more than other dealers, really went out of its way to support customers during the tough years, which impressed us,” says Jared. While Clusko’s road builders and dozers are Caterpillar, the Deere inventory includes 18 processors, 11 feller bunchers, 10 forwarders, six skidders, eight knuckleboom loaders, one grader, six excavators, two skid steers, two wheel loaders and a backhoe.

Clusko owns 40 trucks and subcontracts 10. With this `Red Army’, as the fleet is referred to, Jared and colleagues “shoot for 60 runs daily” (for the record, the most loads the company hauled in a single day was 140). In Prince George, the timber is delivered to Canfor, and Tolko takes the wood from the Williams Lake and Kelowna operations. “Between the three operations we have a comfortable working environment. People help each other out; if Troy or Ryan phone needing more trucks, I’ll dispatch them, and if I need a processor they’ll send one up.”

Not surprisingly, Jared smiles when it is suggested that Clusko is extremely well-positioned to take advantage of the logging renaissance that most analysts believe will occur in B.C. over the next five years. “I agree. Expanding our harvest is one thing, but the best thing we’ve got on our side is dedicated people, and that will be the key to seizing opportunities in the next little while as other companies scramble to rebuild their crews.”

That said, Jared is satisfied to maintain the course for the time being. “With 850,000 cubic metres to manage in this region I’ve got enough on my plate – for now, at least.” To which he adds, “It’s a good time for us to be in this business: we’ve reached an age where we feel we’re just hitting our stride and are excited by the future. Nothing could be cooler than that.” 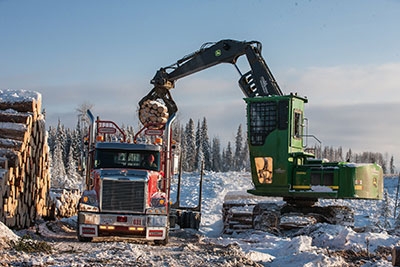