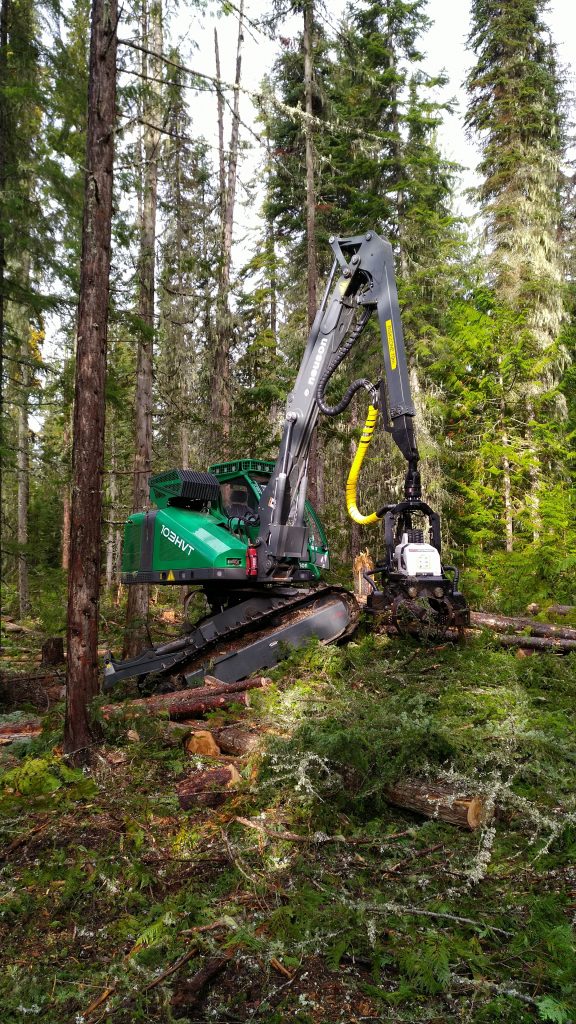 Earlier this year, the B.C. Council of Forest Industries released a report called “SmartFuture: A Path Forward for B.C.’s Forest Products Industry,” with 60 recommendations to help strengthen B.C.’s forest industry. One of the recommendations is to move from area-based tenure to volume-based tenure. Another is to begin pre-commercial thinning and stand tending.

Kerr believes that transitioning from clearcutting to commercial thinning is key to the B.C. forest industry’s long-term success – it will reduce the risk and severity of wildfires and result in good forest management practices.

Kerr has already seen the benefits of this through his own commercial thinning and wildfire fuel reduction operations, which began in 2017 when his local community forest manager contacted him and asked him to participate in a pilot project. 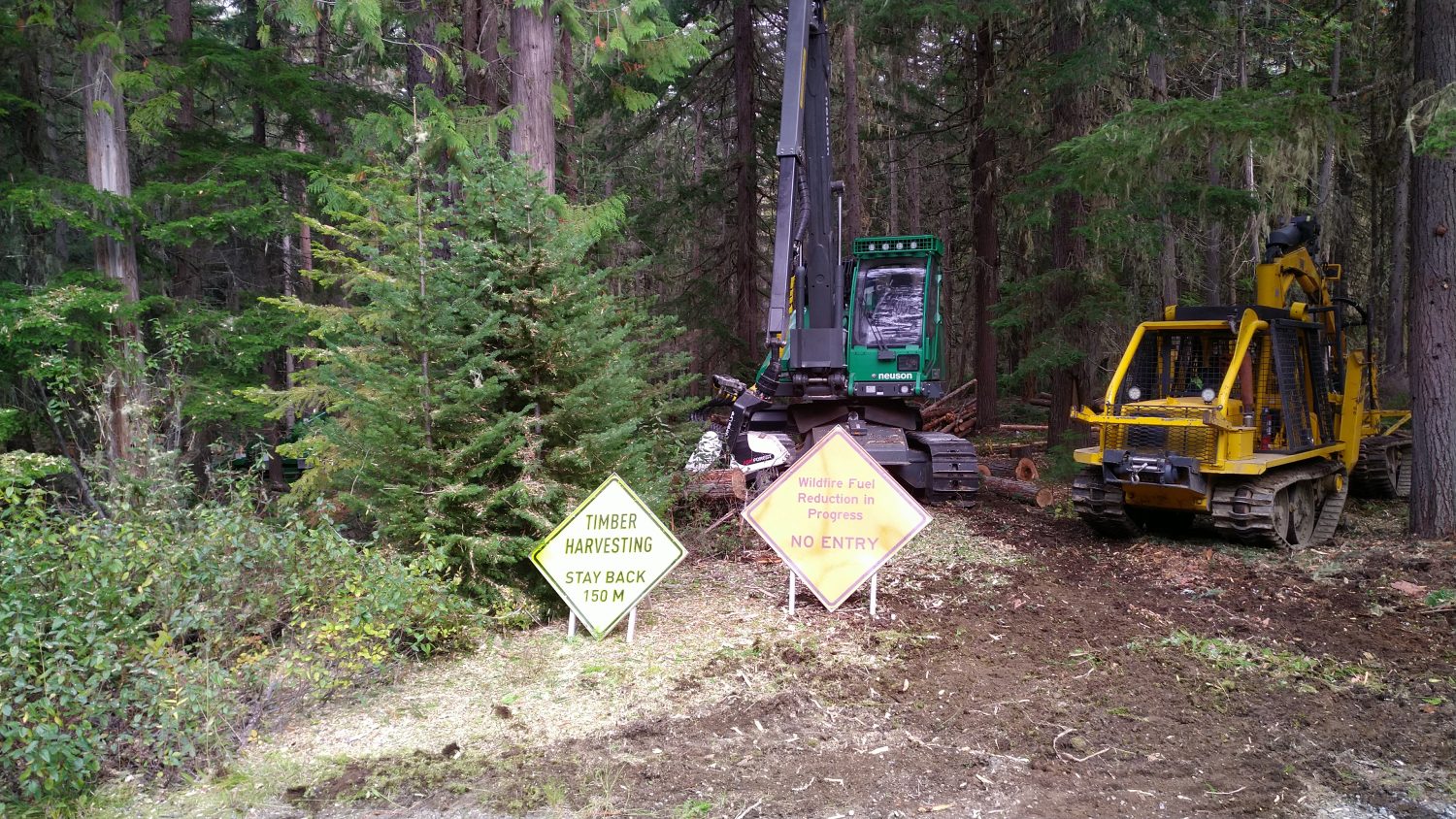 The pilot project involved wildfire fuel mitigation and reduction work in and around an area where the community forest tenure lies adjacent to private property, Kerr explains.

In the summer of 2017, Kerr and others involved in the project began harvesting by hand falling and bucking. After three months of this, the harvesting slash was adding up, so Kerr set out to buy a mobile tracked chipper to process the small, fine waste in order to sequester carbon and provide ground cover in the forest.

“We wanted to have a small ground cover of nutrient-filled material ready to suppress weeds, because once you open up the forest, of course you get infill of some type, which is not necessarily what you want with thinning or fuel mitigation,” Kerr explains.

After doing some research, Kerr turned to Radius Industrial Works, Bandit’s Western Canadian supplier, for a custom-built, 12-inch tracked wood chipper that met the unique requirements for the project.

Initially, to move the harvested timber out of the forest, “I used a CAT 518 line skidder. I brought that onto the site and we started the harvesting, but with the prescription requirements, everything was really tight, closely confined between retention or leave trees. So, there’s a lot of potential for damage to the forest, not only from getting the skidder between the trees to where the logs are to haul out, but dragging them through the forest – they were bouncing off retention trees, damaging them and scarring the ground,” Kerr explains.

“To achieve a fuel reduction thinning, the spacing requirements that are targeted for our forests here in the West Kootenays is 150 to 200 stems per hectare,” he adds. “That will translate to five- to seven-metre spacing, or 15 to 24 feet between each tree, depending on the species. So, it’s quite dense. It still allows a spread in the crown forest land so as to not carry a fire, but also offers a shaded fuel break at ground level to foster some shrub and grass growth, not to mention moisture retention.”

An arborist by training, Kerr could not in good conscience continue damaging the forest. He and the community forest manager agreed they needed to find a different way to remove trees.

“That’s when I really got serious about thinning. I said, this is the direction I want to go on a full-time scale and be broader than the West Kootenays – maybe the East Kootenays, the Okanagan, other areas where I can help people succeed in this fuel mitigation and restorative thinning,” Kerr explains.

In late 2017, Kerr purchased a F4 Dion from Michel Dion, based in St. Augustin-de-Martins, Que.

“It’s a forwarder on rubber tracks, very small – six feet wide, 28 feet long. It can haul either cord wood or short logs; I have it set up for 16- to 18-foot logs to meet cut-to-length requirements for local sawmills. The forwarder changed everything in terms of not having to build any block roads or trails, or construct landings, and being able to have very dense tree retention without any residual damage,” Kerr says.

The forwarder is so small it can move between trees easily. The F4 Dion has a rubber track with an iron cleat, similar to a snowcat, but smoother, with only one point of contact for traction. As a result, it’s very light on the ground and does not squash the root maps in the forest.

“They did a good job building it – it’s hand-built by these guys,” Kerr adds. “Very simple to fix, very easy to operate, very well-built for the right situation.”

Purchasing the F4 Dion allowed him to become productive.

“This is going to sound funny in the grand scheme of productivity today, when guys are doing five to nine loads of wood a day. But we were able to achieve a load per day to a load-and-a-half,” he says.

“There was no net loss to the client. The wood that we extracted paid the workers’ wages and they got it all cleaned up to a fuel reduction standard; plus the forest was properly spaced for regrowth and health.”

Kerr used the F4 Dion for thinning in the community forest until 2018, and then did a few private jobs thinning. But there were still shortcomings, such as not being able to safely and quickly manage the merchantable and under-sized wood profitably.

But by this point, “thinning for forest health became an obsession,” Kerr says.

“I went on the hunt, studying Scandinavian, Swedish and Finnish techniques, how they manage their forests,” he explains. “I did extensive phoning and hours of research with equipment manufacturers over there because they have the modern equipment to achieve what we want.”

A highly efficient solution
Eventually, a YouTube video of a Neuson machine used in the Alps caught his eye. Neuson builds steep slope, low-impact harvesting and thinning machines, which are ideal for B.C.’s steep slopes.

Kerr reached out to Neuson and got in touches with Michael Pirklbauer at Neuson Forest headquarters. He recommended a Canadian supplier – Sherbrooke, Que.-based Marquis Equipment. Kerr spoke with Tom Fredette of Marquis Equipment, who informed him of the availability and models within his work range. Fredette also put Kerr in touch with Timo Savornin, area manager for AFM-Forest.

Working with Marquis, AFM and Neuson, Kerr landed on a unique combination: a Neuson 103HVT harvester and an AFM-Forest 45 White Line harvester/processor head. 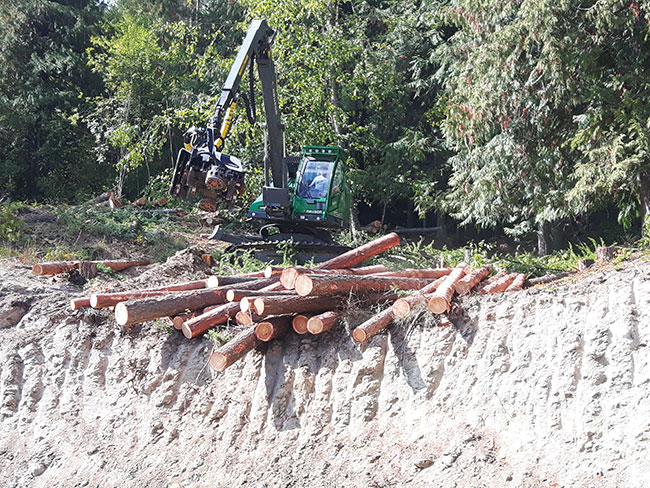 The Neuson 103HVT is built to harvest 16 cubic metres per hour of under six-inch diameter wood, and with the AFM 45 head, feed wheel rates at 5.2 to 6.9 metres per section are easily achievable. Photos courtesy AcreShakerr Contracting.

“I think it’s one of three in North America; another young fellow and his father in Quebec have one – last year’s model, I believe. I was told another fellow bought one around the same time as me; I believe it’s in Nova Scotia for hardwood harvesting. None are located in the Pacific Northwest otherwise,” Kerr says.

The machine arrived in the West Kootenays in June 2018, at which point Kerr began testing it and learning how to run it efficiently. Kerr reached out to a local mechanic, Clayton Overholt, to see if he was interested in providing warranty services should issues arise. Overholt is now AFM-Forest’s dealer for Southeast B.C. and the warranty provider for Neuson.

“The machine I have is highly profitable in regards to the client’s return on small wood,” Kerr says. “That’s why it’s small – it’s designed to just hammer through the wood. It loves the eight-inch to 14-inch wood, but also processes down to 1.5 inches for full-tree utilization.” Most of the wood Kerr logs is 12 inches or fewer.

“If you want to produce in small wood, this combination is it,” he adds. “I’m still learning, and I’ll do 30 cubic metres in four hours, just playing around. That’s all small wood, six inches in diameter, so that’s a lot of cutting.” 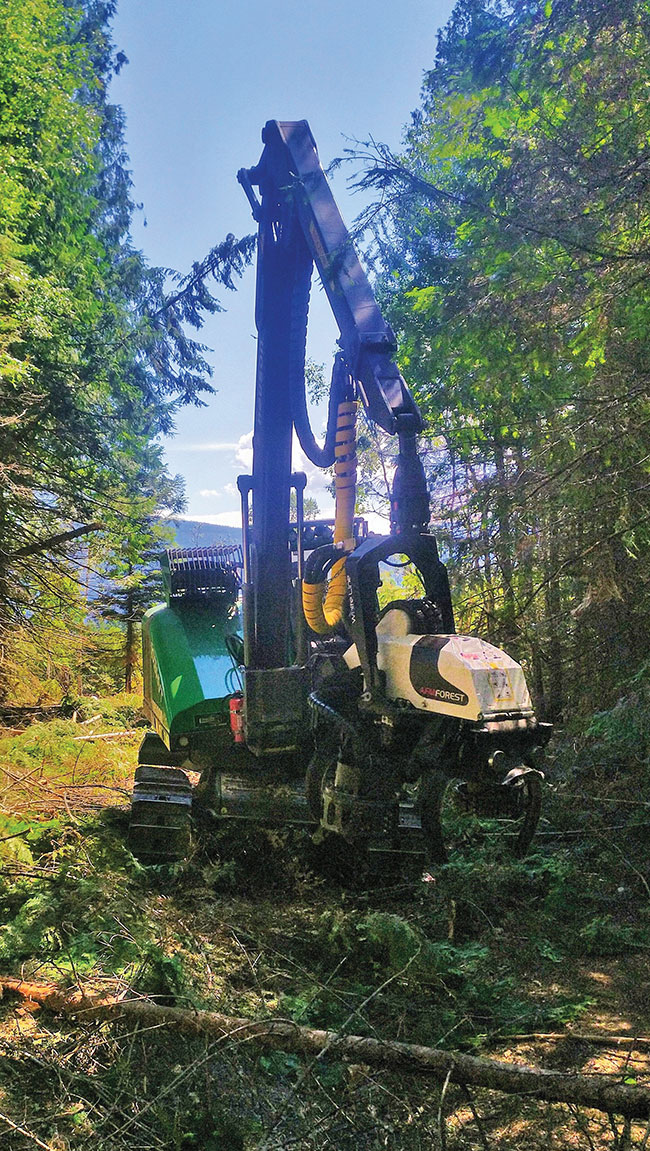 The Neuson is built to harvest 16 cubic metres per hour of under six-inch diameter wood. Photo courtesy AcreShakerr Contracting.

The Neuson is built to harvest 16 cubic metres per hour of under six-inch diameter wood, and with the AFM 45 head, feed wheel rates at 5.2 to 6.9 metres per section are easily achievable, Kerr says.

“It’s so fast, the head, it swings around if you’ve got a larger piece of wood in there. It’s highly, highly efficient at what it does. They’ve got it dialled in,” he says.

After Kerr received his machine from Neuson and AFM-Forest, he reached out to other B.C. loggers to tell them about his experience and the value of commercial thinning. Hayworth was the only one to call back.

“A lot of people are just wigged out because, traditionally, there’s not a lot of value coming back to the client with small wood and thinning, but that’s because we don’t have the appropriate equipment to process it, and we underutilize the smaller wood. It’s not because there’s no money in the wood – there is revenue in small diameter,” Kerr says. “Sweden makes the bulk of their money on 11-inch diameter trees, constantly growing young, healthy forests and harvesting on rotations. Go to any cut block in B.C. and look at their slash pile – there’s 14-inch trees in there and all kinds of wood my Neuson-AFM combo can process and send to mills.

“My competition around here, they’re baffled,” he continues. “Traditionally, we go on a cut block-driven harvest where it’s clearcut for economic reasons. Get in one area, stack every piece you can, and get out. But that doesn’t serve us well with our changing climate, beetle outbreaks, wildfires or future forest harvests.”

Kerr believes the current downturn in B.C.’s forestry industry will force a change and more loggers and tenure holders will begin thinning within the next year or so.

Looking ahead, he hopes to expand his commercial thinning operations. For now, he will continue working on fuel mitigation projects, working with community forests, regional managers, private clients, BC Parks and corporations. He recently started a project for BC Parks, working with ATCO Forest Products and Mercer Celgar.

Thinning for forest health “is our only way forward,” Kerr says. “There’s no magical solution. It could rain for 40 years straight, there could be no more wildfires, and this still won’t correct British Columbia’s fibre supply. In terms of fibre availability, until we space our stands and grow them for quality, health and vigor, we will suffer as we are. We must discontinue harvesting for quantity and log for the future.”