Two years on the drawing board, six months in construction, and now 10 months in operation, Moose River Lumber Co.’s (MRL) $USD 6.5 million ($CDN 6.3 million), computer-automated, graderless planer mill has delivered as projected. The new planer mill is producing on a single shift as much as the company’s old planer mill did on two shifts, providing significant grade recovery improvements, and reducing both economy grades and trim loss. And it does it all with roughly 25% of the manpower previously required. 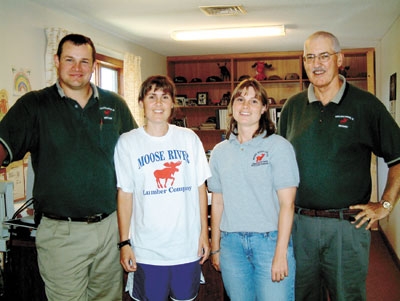 “Grade separations have been excellent and we’re basically doing more now in a single shift with six people than we did with two shifts with 12 people per shift,” explains co-owner and president Charles Lumbert. The 90 MMBF single-shift spruce/fir sawmill also used to outsource additional planing capacity.

“Our planer mill was the bottleneck,” Lumbert continues. “We were having problems keeping labour and struggling to keep our lumber on grade. So we made the decision after a couple of years of studying it to build a completely new planer mill with the latest grading technology.”

MRL faces an especially tight labour pool because it is located in a small, isolated community near the Canadian border. In the past, the company encouraged any interested employee to become a grader. That could create problems with grade consistency, potentially damaging customer relations.

Desjardins reports a 4.6% increase in #2 & better; 2.2% increase in #3; and though difficult to quantify, a notable reduction in economy grades. Production data also indicates a 0.2% drop in trimmer loss. A recent update with ScanWare’s newest software now allows them to do cut-in-twos, which should further reduce trimmer loss and drive #2 & better volumes even higher. As of mid September 2007, the facility was running at 70% of design capacity, and helping bolster the mill’s customer focus.

“We’re still learning every day how to do a better job,” Desjardins says. “This system has allowed us to target specific defects that our customers don’t see as desirable even if they are on grade, and reduce or eliminate them to improve customer appeal. And it will do that exactly, consistently, every day.”

First Turnkey
Groundbreaking for the planer mill was May 1, 2006, with startup in November 2006. Electrical contracting was done by Wilcox Electric of Bradley, ME, while Rod-Air of Quebec supplied the blower system and ISAC, also from Quebec, handled all PLC work. Still, it was Piché Industries of Daveluyville, QC, that handled the rest. The mill was in fact the supplier’s first nearly turnkey project, and Piché supplied all lumber handling machinery except a Samuel bundle cruncher.

MRL discovered Piché almost by accident. During planning, several vendors in the area and beyond had been courting MRL, and a sales engineer from one of them went to work for Piché. MRL became intrigued, and went to visit a few of the supplier’s installations. They liked what
they saw.

“The company has a good reputation,” Lumbert says. “We saw the gear was built strong, and people were very satisfied with it.”

Material flow is designed for northern Maine’s long, harsh winters, with infeed and outfeed decks built to hold four bundles to minimize door openings. Bundles advance to Piché’s continuous feed tilt hoist, and then into an electric drive Yates A62 planer. Two people are stationed on the infeed side – One at the tilt hoist breakdown, and another at the planer. The planer was bought used, and rebuilt by RY Atelier Fabrication in Longueuil, QC.
A PLC lug loader singulates lumber for the two ScanWare grading frames; the first reading the face, followed by a board turner and a second frame to read the leading edge, face, and trailing edge.

Each camera takes up to 1,000 snapshots per second to provide real-time image processing to identify visual defects. The system looks for the highest possible value, running at up to 240 lugs per minute if required, although MRL runs 8-ft lumber at 150 lugs per minute, and 16’s at 75 for the time being. 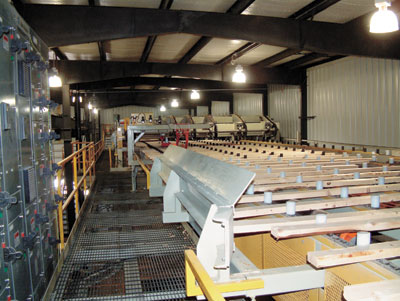 Boards go through the Piché trimmer and 30-bin sorter, and are imprinted by a Mark-O-Print high-resolution inkjet printer supplied by ISAC. The stacker operator unloads sorter bins to an automated transfer carriage, which delivers material to the Piché automatic sticker/stacker line. Lumber packs go through a Samuel bundle cruncher for strapping, then to a custom-built two-man manual packaging station – the only non-automated process in the mill.

Desjardins says the results have been good. MRL has regained customers that had moved on because of grading issues, quite a feat given the poor markets since the new line started up.

Performance
The project is only the latest in a steady stream of process improvements throughout the company’s 31-year history. The owners have survived and thrived through ups and downs by staying focused and always preparing for the future.
“We’ve learned from 31 years of operation that you prepare in the bad times for the good times, because they’re both going to come,” explains Lumbert, a veteran sawmiller who shares ownership with Kruger Inc., a privately held integrated forest products company based in Montreal.

In May 1998, MRL completed a sawmill modernization project that replaced all machine centres on the mill floor and more than doubled annual production. Operating on a two-shift schedule, the mill topped 100 MMBF in fiscal 1999-2000. Continual tweaking and optimization upgrades have boosted throughput so that the mill now produces in that range with just a single 9-hr shift, five days per week.

A large part of that success is credited to an intensive management-training program provided in 1999 and 2003 by P.V.A. Consulting Group, a performance enhancement firm with offices in Montreal, Toronto, Calgary, and Boston. The program was designed to train managers and develop production systems for each area of the operation. Managers went through each production process, developed best practices for each department, and made operators accountable for following those procedures.

A Performance Improvement Team (PIT) was also established for each department. Their goal is to overcome obstacles by identifying the cause and coming up with solutions with employee involvement to permanently eliminate them. All 75 employees are encouraged to submit action reports for ideas.

“Employees are the experts,” Desjardins states. “They’re here every day pushing the buttons, and they have the ideas.” These may be as simple as installing hangers for log picks where jams typically occur. The trimmer PIT increased uptime with a few modifications, including smaller diameter saws and a different lug type, which helped reduce jams and skews at the trimmer outfeed.

Employees can also submit SWATT (Safe Workers All The Time) action reports to promote a safer work environment. The effectiveness of this program is evident in MRL’s safety performance. When we visited, the mill had tallied 1,269 days without a lost time accident, and the lumber yard was up to 4,421 days without lost time.

“We’ve reduced operating costs in the past five years, and we’ve been able to reduce accidents, mainly because supervisors are accountable for that,” adds Desjardins.

Production
Delivered log supply is purchased from private landowners, with about 75% coming in tree-length form and 25% as 16-ft sawlogs. Tree-length logs are bucked on an S. Huot slasher, sorted by diameter, and fed into one of two heated log ponds. Maxi-Tour (Comact) step-type feeders deal logs from the ponds to Nicholson 22-in and 12-in A5 debarkers.

Small logs are scanned in a ProLogic system and sorted into diameter classes. Another Maxi-Tour (Comact) step-type feeder empties bins for batch runs to a HewSaw R200 MSA single-pass breakdown machine. This was treated to ProLogic optimization in 2001.

Both lines funnel to a USNR trimmer with ProLogic optimization, and a 60-bay sling sorter. For drying, two SII double-track kilns were installed in 2000 – each built with 154 MBF capacity per charge. A Wellons 175 MBF capacity kiln replaced three older FEI kilns in 2003, with heat supplied by the original wood fired boiler. The SII kilns use an oil-fired boiler, a move made before recent oil price increases. To reduce fuel costs, the steam line between the two kiln buildings was connected so that both boilers fire the kilns, but for a long-term solution the mill is studying the feasibility of adding a wood-fired boiler and cogen plant to provide both power and steam. Lumbert hopes to have the first phase – building and boiler – installed before winter. That alone would save a million dollars per year, he says. And so the search for improvement continues.

Jennifer McCary is a veteran forest industry writer with Timber Processing Magazine in the US, where this story first appeared. Used here with permission.