West Fraser Timber Co. Ltd., Canfor Corporation, and Tolko Industries Ltd. are among the organizations honoured by the latest edition of the Top Employers project, which recognizes industry leaders across Canada for their efforts to create exceptional employment opportunities. In addition to its place as one the BC’s Top Employers, West Fraser was also named one of Canada’s Top 100 Employers.

Asked what makes West Fraser a special place to work, D’Arcy Henderson— Cariboo regional manager for the company—points to a workplace culture that values loyalty and commitment and recognizes employees’ hard work.

“One of our key operating philosophies—and it’s been this way since we began in 1955—is to promote from within,” says Henderson. “We have over 5,000 employees here in Canada, and we have a great talent pool. We work with good people, and we like to recognize them when they step up to a challenge and view it as an opportunity.”

The key to West Fraser’s strategy of recruiting and retaining top talent lies in their ongoing employee development and training programs, which include a partnership with the College of New Caledonia that offers apprenticeship programs for millwrights, electricians, and mechanics, as well as a New and Young Worker Program that provides extensive on-site training to employees under the age of 25.

“Whether it’s hiring directly from a university and into an entry-level position or hiring someone for our woodlands operations, the principles are the same,” Henderson explains. “We’ll continue to educate, train, and dedicate resources to our employees—and where we can, give them opportunities to further themselves and take on different opportunities within the company.”

“Achieving employment and training diversity and inclusion is a key priority for us,” she says. “This includes supporting the growth of women across the organization and focusing on building strong relationships with First Nations.”

Canfor’s focus on inclusivity also extends into their community engagement activities, including a unique program that gives employees a chance to take time off and volunteer with local charity partners in an effort to give back to the communities where they work and live.

Equally important to Canfor’s support for local communities, of course, is its support of its employees’ continuing training and development. The company offers in-house apprenticeships, subsidies for professional accreditation and tuition fees, and mentoring programs for professional development, among other training initiatives.

“We are very proud of our recent launch of Canfor College, a training and development framework that provides our employees with access to opportunities to further develop their skills,” Arnish adds, “as well as our Accelerated Leaders Program, targeted at up and coming leaders with strong potential for future growth within the company.”

Henderson believes it is efforts and initiatives like these that keep employees engaged and productive over the long haul.

“I’ve been with West Fraser for 15 years now, and I still feel like a rookie,” he says. “Every day we’re recognizing our people for long-term employment status—often in the neighbourhood of 35 to 45 years with the company. It’s remarkable. When you’re surrounded by content, happy people that are busy applying their skills and trades to the job, it makes for a very enjoyable place to work.”

Now entering its 12th year, BC’s Top Employers is an annual competition organized by the editors of Canada’s Top 100 Employers. Both the provincial and national competitions evaluate companies based on eight different criteria, including work atmosphere and environment, benefits and compensation, training and skills development, and community involvement, among others. This marks for the fourth consecutive year that West Fraser has received the provincial honour, and the first time it has been recognized nationally. Canfor has been recognized for the third consecutive, while Tolko Industries appears on the list for the first time in 2016. 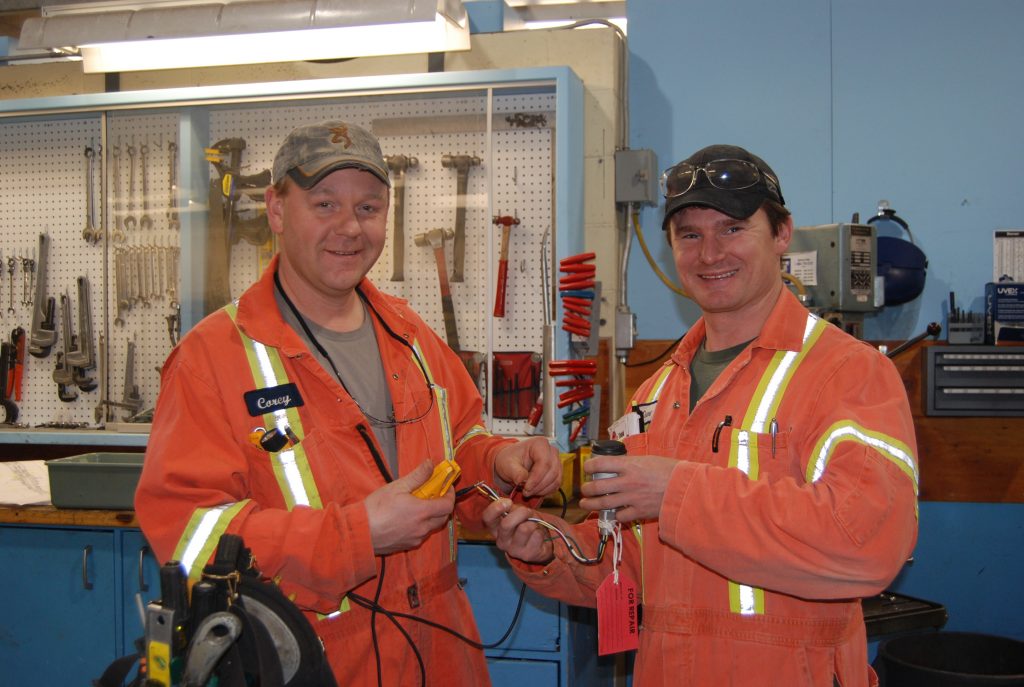 Corey and Steve
Print this page