June 11, 2016 - Changing global dynamics and connectivity was a predominant theme throughout International Wood Markets Group’s sixth annual Global Softwood Log and Lumber Conference, held on May 5 and 6 in Vancouver. This year’s conference featured a deep dive into China as well as Russia. As in previous years, the continuously evolving softwood markets in China rose to prominence in the discussions, as did the growing trends of Russia’s log and lumber competitiveness and exports to key markets. While there are direct implications for west coast softwood producers and exporters, there are also indirect ones for other regions in Canada. 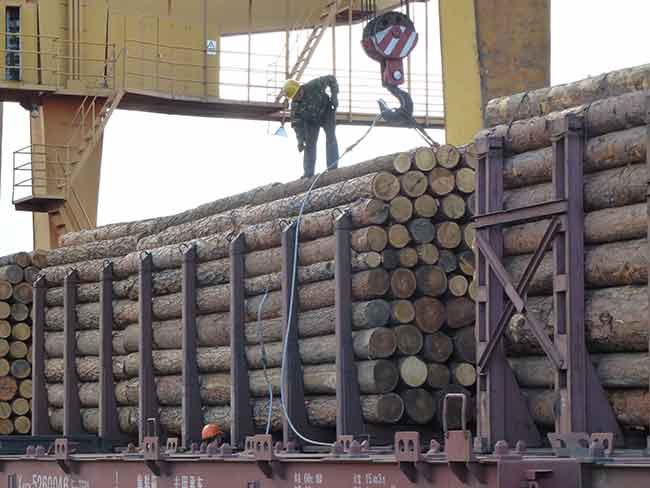 China has become the global player in the softwood log and lumber markets, consuming 17 per cent of global softwood lumber imports and 35 per cent of global softwood log imports in 2015. Currently, the country’s domestic softwood log harvest meets less than half of its log demand and it imported 30 million m3 of softwood logs, as well as 17.5 million m3 of softwood lumber in 2015. A new conservation policy could soon increase this import demand further. The Chinese National Forest Protection Project is currently in the second year of a three-year program that is banning timber harvesting from natural forests in various regions in China. While the government is massively expanding its southern plantations – mainly eucalyptus and poplar – much of the gap in China’s domestic log production will need to come from increased softwood log and lumber imports. The scale of this logging ban was discussed over the two days at the conference, including how large the gap could be in softwood logs and lumber. While the exact magnitude of the reduction on the domestic softwood log supply was not able to be defined, there is no doubt that the logging ban will require a large increase in log and lumber imports from offshore suppliers to help balance this widening deficit.

So, where will all of this incremental wood come from? China’s top import partners include Russia (logs and lumber), New Zealand (logs), Canada (some logs, but mostly lumber) and the U.S. (mainly logs, but some lumber). Other suppliers to China include Scandinavia, Australia, Chile and the Ukraine. A major focus of the conference was whether these exporting regions could increase their incremental production and exports to a level that would meet China’s demand (projected to increase slowly over the next few years) plus cover the pending deficit in China’s timber harvest.

Russia
With huge swaths of boreal forest and close proximity to China, Russia has become the country’s No. 1 supplier of softwood lumber and No. 2 supplier of softwood logs. The devaluation of the Russian ruble over the past two years has resulted in a dramatic reduction of costs vis-à-vis other global producers, resulting in a steady rise in Russia’s market share for lumber in China. While Russian log exports decreased 15 per cent to China in 2015 as compared to 2014, lumber exports increased 15 per cent. However, Russian log export taxes (first introduced in 2008) remain in place, and several factors are holding back Russian producers’ ability to rapidly scale up timber production, log exports and, to a lesser extent, lumber exports.

First, with most of the easily accessible forestland now harvested, logging companies are facing longer hauling distances and higher costs. Second, the heavy debt carried by many Russian producers is limiting their ability to attract additional investment capital needed to upgrade their harvesting operations and sawmills. Third, investors from outside of Russia have been hesitant to enter, due to the challenge (and risks) of operating in Russia – and also the fact that all of the prime forest licenses are now in the hands of existing companies.

In summary, the low ruble has made exports very competitive in the short to medium term, but is unlikely to boost investment and production (beyond incremental levels), especially with cost inflation and borrowing costs starting to rise.

New Zealand
New Zealand, supplier of about 30 per cent of China’s softwood log imports, has the potential to increase its timber harvests, but not necessarily in any major volumes. A wave of forest plantings in the 1990s and 2000s will result in an increase in the number of harvestable trees within the next five to 10 years. However, much of this forest may be commercially inaccessible, as it is located in small, isolated pockets or on steep and/or unroaded land and owned by small, private owners. Furthermore, potential shortages of skilled labour and port capacity have so far tempered the country’s ability to harvest and export the bulge of harvestable plantations. Current sawmilling and timberland investment patterns indicate a steady state rather than a rapid increase in production.

Northern Europe
Could exporters in Northern Europe (Finland and Scandinavia) take a larger share?  Heavily dependent on the potentially unstable Middle East – North Africa (ME-NA) region as an export market, the Europeans would like to diversify their markets, and an increase in exports to China (which has been the trend over the past few years) could play a part of this. However, European mills export very little construction-grade lumber to China, focusing instead on furniture and decorative end uses. Furthermore, European export volumes to China still have a small market share in comparison to Russian and Canadian volumes. Even a large percentage increase would have a relatively small impact overall on the Chinese demand.

Opportunity for North America?
So, if the China’s supply gap won’t be completely filled by Russia, New Zealand, or Europe, does this mean more opportunity for North American exporters? The answer will depend on price dynamics, but the answer is: probably. A steady U.S. housing recovery and a high U.S. dollar means the U.S. market is currently more desirable for both Canadian and American producers. However, should China incur softwood log and/or lumber imbalance and/or shortages, this could raise prices and reignite interest in North American exports to China. If more lumber is exported to China, then that will tighten up the supply and market balance and will cause prices to rise across North America. Furthermore, west coast Canadian producers will want to keep all of their export options open, given that the one-year grace period following the expiry of the Canada-U.S. Softwood Lumber Agreement is set to end in October and there is the strong expectation that punitive U.S.-imposed duties will be the next stage. So, an increase in Canadian lumber exports to China instead of the U.S. market could offset any softwood lumber supply shortages in China, but it still leave a tight log market.

In conclusion, changes in China’s timber harvest regulations in various remote places (such as Inner Mongolia and Jilin Province) could cause a major ripple throughout global softwood markets, as they did from 2010 to 2013. In this scenario, it is expected that the direction of shipments of western Canadian lumber suppliers could switch back to China – and quickly – leaving a gap in North America for other Canadian-producing regions. While there is always uncertainty about how this new Chinese government policy may impact China’s overall supply and demand situation, a number of speakers at the conference suggested that an imbalance in North American timber and lumber production is likely to occur within the next two years, with or without the impact of the Chinese logging ban. In fact, we could be closer than we think to a major market shift, but that is probably more difficult for most to believe – unless, that is, you were in attendance at the Global Softwood Log and Lumber Conference where you heard all the various perspectives!