Features Harvesting
Time for a dialogue: TLA Convention to give BC industry the mic 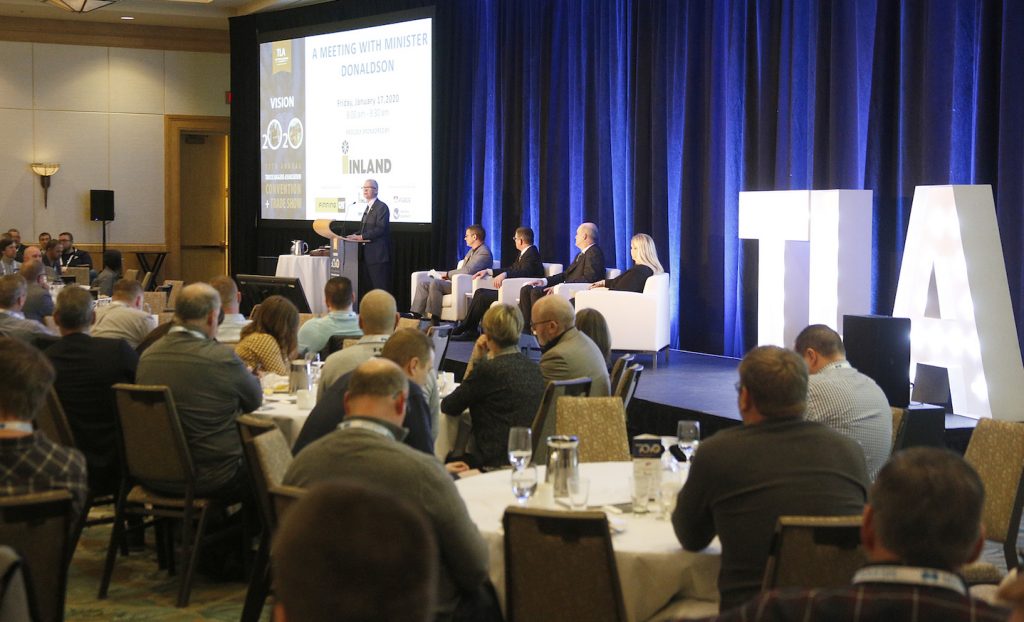 Truck loggers and other members of B.C.’s forest industry listen to a speech from (former) B.C. Forests Minister Doug Donaldson before a Q&A with attendees of the 2020 Truck Loggers Convention in Vancouver. Photo by Adam Kveton.

With all of the policy changes thrown at B.C.’s forest sector over the past couple of months, with seemingly little consultation with industry, the B.C. Truck Loggers Association (TLA) is offering industry a chance to finally discuss their future.

The 2022 TLA Convention is back in person Jan. 12-14 in downtown Vancouver and the three-day agenda is teeming with speakers and panelists addressing the myriad changes to B.C.’s forest policy and what that will mean for the future of the industry.

“Now that we have a full picture of the direction government is going, people have woken up to the fact that this is something to be challenged,” TLA executive director Bob Brash said in an interview with CFI.

Brash has been a vocal critic in media calling out the government’s lack of consultation with TLA’s members, which includes logging contractors, manufacturers, and license holders across Coastal B.C.

“Our concern is, they’ve set out these broad objectives, but they’re not working with any of us in terms of how we can successfully implement them or the nuance that’s required to make them have a chance of being successful. We’re the ones who have to deliver them at the end of the day. And if you don’t work with us, it’s got a high likelihood of failure,” Brash said.

Much of the convention’s agenda is dedicated to hearing various perspectives on the future of forestry in B.C. Some panels will bring together proponents of the government’s policy with those who are against it to understand both opportunities and challenges. The goal is a dialogue from a wide variety of opinions, Brash said.

In essence, the convention is the discussion that Brash said was missing prior to government’s sweeping legislative changes to forest policy.

The convention’s theme for 2022 is, “Firmly planted. Standing strong” – a nod to both their community roots and their resolve to have a strong voice in decisions that are shaping the industry.

“We wanted to be pretty assertive in the theme,” Brash said. “We’re proud of what we do and we’re not shying away from that.”

Not all convention talk will be heavy. Futurist Nikolas Badminton will kick off the sessions with an insightful and motivational keynote on how forestry fits into global resiliency and the move to circular economy principles and sustainable practices.

The agenda will also hear from FPInnovations’ Stephane Renou, among others, on the future of technology in the forest sector. And Forest Products Association of Canada’s Derek Nighbor will join Juniper Collective’s Dana Collins to discuss sustainability, climate change and diversity.

Back again for 2022 is the popular B.C. politics discussion between CHEK News’ Rob Shaw and Global BC’s Richard Zussman.

“There is no shortage of things to talk about. And the hope is, at the end of the day, government takes note because of the different opinions there. And they will be forthright,” Brash said.

Check out the full program and speakers and register for TLA Convention 2022 at: www.tla.ca/convention

Related
Why do we still log old-growth? The answer is not in a 15-second sound bite
Living tradition: Mattey Bros weathers industry challenges in the BC Interior
Wahkash Contracting continues tradition of employee growth
Forest stewards: Williams Lake company takes a holistic approach to forestry