March 28, 2016 - Buildings don’t cut lumber and don’t generate revenue. But they can grind your business to a screeching halt. Such was the case for EACOM Timmins, where a fire in the building’s exterior caused millions in damage and stopped operations for almost two years. 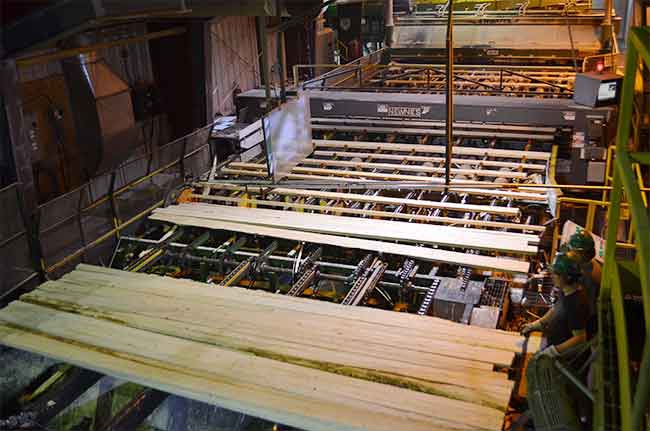 One of the challenges was building a sawline that would fully integrate with existing equipment still in place from before the fire. Buildings don’t cut lumber and don’t generate revenue.

The sawmill property along the Mattagami River has been active for many generations, long before EACOM acquired the mill and four others from Domtar in June of 2010 for $126.5 million. Among the assets on the property was a Quonset built in 1970 to house the main sawline. The Quonset used a combination of laminated beams, strapping, insulation and tin to form the structure of the facility.

The problem with the Quonset structure, especially in the case of using it to house a sawmill, is that there is a gap between the 2×6 strapping and the tin that can accumulate, in this case, sawdust.

By 2012, that structure still held the main sawline, although approximately half of the operation was located in wings off the sides of the main building. But hot work was being done in the quonset, which has since been revealed as the source of the initial spark.

“The fire was hot work that actually had a spark go through the insulation into the dust,” says Guy Fleury, general manager of EACOM Timmins. “With no oxygen, it just smouldered for an unknown amount of time. It can smoulder for hours, days or even weeks before it gets oxygen and it starts the fire.”

Fleury explained that around 9 p.m. on the night of Sunday, Jan. 22, 2012, two days since any hot work had been done in the mill, the fire broke out in the roof between the insulation and the tin.

“The insulation started falling and, as the insulation would fall it would throw oxygen to the dust. The dust would then burn similar to gasoline, a really high burn, then out.”

The fire travelled from one end of the roof to the other, and it took out much of the primary breakdown of the sawmill. Mill components including the edger, trimmer and chipper were sheltered from the fire, as they were all either in the wings of the facility or in the basement.

“We were fully exposed with no roof, and it was January,” Fleury explains. “So then snowfall and the gallons of water used to put out the fire formed the line into a big chunk of ice. When it thawed out in the spring, it was clear that the equipment was damaged beyond repair.”

Tough decisions
Making the decision to rebuild, how to do it, what to do and what equipment to use, was not a short process. EACOM wanted to take the necessary time to ensure that the new line would complement the machinery already in place, have the capacity to meet production targets and provide the functionality necessary to provide the quality of lumber that the company strived to produce.

There was one decision that was simple; however, build a new building to house the primary breakdown line that met current fire code and safety standards, while also providing the necessary amenities.

But the replacement of the sawline wasn’t as simple. EACOM set out to find a company that could meet the demands of the mill (40,000bft/hr) and tie-in all of the equipment already in place throughout the site. The mill runs off a mix of white and black spruce, jackpine and balsam, making, 2×4, 2×6 and 2×10 mixed-grade lumber at lengths of eight to 16 feet.

After months of research and evaluation of proposals from different manufacturers, the company moved forward with a system from USNR.

“USNR took on a turnkey plan to rebuild the sections of the mill and tie them in to the old sections that we had,” Fleury says. “We put mostly new USNR equipment in, except for the conical first breakdown chip heads, which were not damaged in the fire. Everything else was changed from the debarkers right through to the trimmer section.”

The EACOM Timmins mill runs mixed species with 5” to 25” diameters at 12- to 16-foot lengths. Originally, the mill ran a 17-inch Nicholson debarker and a 30” Forano. When the debarker was replaced, the mill once again purchased a 17” Nicholson, but added a 27” Nicholson as well, then converted the debarking arms and tips to Andritz. With this setup, any logs with 12” or less diameter feed to the 17” debarkers, with diameters greater than 12” sorted through to the 27” debarker. The stepfeeder sorts the logs for the 27” into two decks, “big and biggest,” with two decks separating the logs for the 17” into small and medium widths. Stems with diameters of between 3.5” to 5.5” are shipped to EACOM’s Gogama mill, approximately 125 kilometres south.

The line features a scanner and quad roll log rotation system followed by  a USNR Extended Length Infeed with two scanners, the first of which provides slew and skew log positioning and the second for cut pattern solutions. Then there is an Optimil 30-degree V-slide with Iggesund variable speed conical heads. This was the only piece that survived the fire and, according to Fleury, is one of only two Canadian mills running 29.5” conical heads. This feeds into a USNR Quad Arbor circular saw box that can take a sideboard up to 21” (the top knot buster chipping head take off anything over 21”). The system also features a separator outfeed to help control the middle cant while allowing up to three side boards per side to drop off.

The USNR has been built to function with the secondary components already in place and not damaged in the fire. The Newnes trimmer and stacker were installed at the mill in 1999, with the  Newnes board edger put in three years later. A 33-bay used J-Bar sorter was purchased and installed as well. It is capable of 120 lugs per minute.

Pushing forward
The installation of the new equipment took the Timmins mill until October of 2013, nearly two years after the fire. Prior to that, the line had been running at 33,000bft/hr. and it wasn’t long before the team had the line running at or better than the previous output.

But production at 33,000bft/hr. was not the target set by the company once the new equipment was installed. The new mill was built to increase that production up to 40,000bft/hr., while still keeping two full shifts across the five-day week and leaving weekends open for maintenance on the mill.

By the fall of 2015, production had ramped up to 36,000bft/hr., and the mill was starting to make the strides necessary to creep closer to that production goal.

“While we didn’t lose any trades, we did lose about 30 per cent of our labour force because they were laid off after the fire,” Fleury explains. “So we had to hire new people and do training, and we all had to understand how to saw with the new mill.”

Fleury suggests that the team hit its stride around the middle of 2015 after making significant gains in the first half of the year. Now they have to focus on the small, incremental gains that will help push up production even further.

Just a few years removed from that devastating January evening, the shores of the Mattagami are again filled with the sounds of the sawmill.

One of the challenges was building a sawline that would fully integrate with existing equipment still in place from before the fire.

New technology attracts next generation
The introduction of advanced automation technology in new mill systems such as the USNR line installed at EACOM Timmins has provided a way to attract the next generation workforce to come back to the sawmill.

“USNR and other manufacturers have been using state of the art technology to be able to control the process,” Fleury says. “We now have quality control and mill maintenance staff walking around the mill with iPads and laptops able to monitor the process, look at what the PLCs are doing, track when anything is going wrong and needs service.”

The mill has incorporated USNR’s MyMill system, which also provides control of sorting equipment including moving chains and dropping bins.

It’s the kind of technology that is attracting youth in the Timmins area to look at the sawmill as a possible career choice, putting themselves in a leadership position in the mill by using the technology that consumes many of their off hours every week.

“Most of the kids now don’t want to do all of the heavy labour that their forefathers did in the workforce,” Fleury says. “So they look for jobs that involve a little less physical labour and more of this automated work which these new sawmills can now offer. Getting paid to run a system from an iPad, for them, becomes more attractive.”

Planer Upgrade
In October of 2015, EACOM officially announced that it would invest an additional $2.8 million to upgrade the planer and trimmer systems at the Timmins mill. The investment would include a new lumber grading system as well as an upgrade to the planer mill control systems.

“The grade scanner we had was one of the first random machines that was put out by OptiFor, which are now built and maintained by VAB Solutions,” Fleury says. “We had it for well over 10 years and it was at the end of its economic life.”

After investigating the systems available, EACOM decided to purchase a ProGrader system from Autolog. The Autolog system has an operating speed of up to 3,000ft/min., using both 3D geometric sensors and 2D vision sensors to provide more accurate grading of the lumber. It also incorporates tracheid sensors that measure the slope of the grain.

The company also decided to reconfigure the planer/trimmer infeed system at the same time. In addition, the company added a few more components from USNR to complement the initial rebuild, adding USNR’s new positioning fence and a revolver lug loader.

“The expansion is being done mostly for grade and product value, with a little increase in productivity,” Fleury says. “The productivity is not the paramount part of the project. It is really made for more accurate and consistent grading than we have today.”

“The planer Automation Upgrade and Pro grader were done by Autolog during this past Christmas break [2015] and into the first week of January. We also did install the USNR fence system and revolver lug loader. The whole project has been a resounding success both on the productivity side, but especially in our grade recovery and trim loss improvement. We are extremely pleased with the results so far. They have exceeded our expectations and will definitely help keep our mill as productive and profitable as possible.”

With the sawmill and planer running better, the mill sets its sights sights on drying capacity and Continuous Dry Kiln technology in 2016.