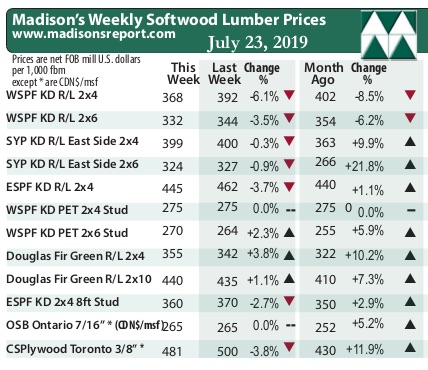 One must congratulate the major sawmills in the Pacific Northwest for such quick response to badly softening prices. Without some serious reductions in supply, prices could have continued falling to below $300 mfbm. While it’s true that right now sales are slow, this is still better in the long run than accepting lower and lower prices to close a deal. Specifically because the latest data of U.S. housing starts, released last week for June, are encouraging. Single-family unit starts are up +3.5% compared to May. More importantly, builders and contractors are reporting a dangerous lack of skilled labour throughout Canada and the U.S. This means construction companies have building projects already planned but not the workers to complete.

Expectations for the next couple of years are, therefore, that demand for wood will continue at least at the same volumes it has been since 2017.

The volumes of manufactured wood taken out of supply by the downtime and curtailments at many of British Columbia’s largest operators during 2Q and 3Q 2019 prevented a serious depression in pricing. — Madison’s Lumber Reporter

Sales activity was a bit sloppy last week according to Canadian WSPF producers. The U.S. market was “stagnant.” In Canada it was better, but was not able to pick up the slack left by the former.

The below table is a comparison of recent highs, in June 2018, and current July 2019 benchmark dimension softwood lumber 2×4 prices compared to historical highs of 2004/05 and compared to recent lows of Sept. 2015: