After more than four decades under water, a tropical forest in Africa is being reclaimed using 21st century technology from Canada. The result is getting attention for both its innovation and its potential impact on the global timber supply and forest protection. 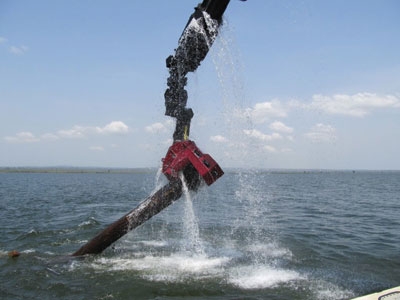 After more than four decades under water

Triton Logging, operating through its Ghanaian subsidiary, CSR Developments (CSRD), has begun commercial harvesting operations at Volta Lake. The trees, which were flooded during the construction of the Akosombo hydroelectric dam in 1965, have remained standing and preserved in the lake’s fresh water. They are considered one of the most valuable submerged timber resources in the world with conservative, third-party estimates of between $US1-2 billion in base log value.

Triton/CSRD was awarded the rights to 350,000 hectares for 25 years by the Government of Ghana, with the agreement ratified by Parliament in late-2010. Since then, the company has deployed teams and equipment to the lakeside town of Akosombo and worked with local authorities on planning and permits.  In addition, more than twenty local employees have been hired and trained.

New Technology
The equipment includes boats, barges, sonar, and a sawmill, plus Triton’s patent-pending SHARC Harvester. Volta Lake is the first of Triton’s international operations to utilize the SHARC system, which was specifically designed for harvesting trees at depths to more than 25 metres (80 feet). Using video and sonar, the SHARC can manoeuvre independent of boats and anchors, allowing it to find, cut and retrieve trees using its powerful telescoping arm and cutting head. Compared to other diver-based underwater logging operations, the SHARC is quicker, safer and able to reach greater depths. 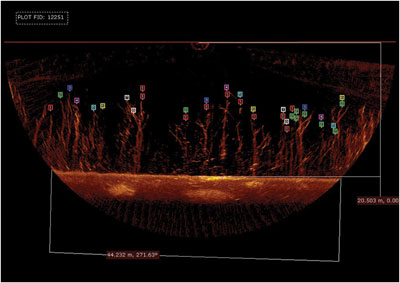 The operation will sell logs to important local markets, which face ongoing fibre supply shortages of more than 50%, and its processed lumber products to local and international customers who have difficulty sourcing legal, environmentally-friendly wood products.

Valuable Hardwoods
So far, the SHARC operators have found promising size, quality and species mix, including Odum, Ebony and Mahogany. Says Triton CEO, Peter Keyes, “Through our years of planning here in Ghana and our experience operating around the world, Triton knows the value and potential of the Volta Lake timber resource better than anyone. Now that we are cutting trees, it’s great to see our team’s hard work beginning to pay off. The SHARC is doing what we all knew it could and the quality of the fibre is exceeding our expectations.”

Demand from China
Though the Volta timber concession is only in its first months of production, its start-up has coincided with a global forest products outlook that has many experts forecasting a worldwide “lumber super-cycle” in the next few years. The convergence of looming supply constraints with record demand growth from importers such as China was the main topic of conversation at a recent gathering of international forestry firms and analysts.

“China’s growing appetite for logs and lumber will continue to increase exports from supplying countries around the world,” says International WOOD MARKETS Group CEO, Russell E. Taylor, “Every speaker at our company’s Global Conference held in Vancouver mentioned the role of China as one of the major stimuli in increasing global exports and creating higher log and lumber prices. New fibre sources, such as Triton’s underwater concessions, could play a mitigating factor as they will be getting up to scale just as the crunch hits in a few years.”

Adds Triton CEO, Keyes, “All I hear from analysts, consultants, NGOs, and CEOs is that the demand for wood will outstrip the sustainable supply in our forests. With global reserves under increasing pressure – especially in tropical regions – Triton’s ability to economically bring millions of cubic meters of submerged wood into the equation is a critical part of the solution.”

Environmental Support
Conservation organizations also see the potential of alternative, environmentally-certified wood sources relieving pressure on critical tropical forests. Says Jon Jickling, Director of the Rainforest Alliance’s SmartWood program, “Any initiative that allows us to both avoid harvesting vulnerable forests and give consumers verifiable environmental credentials for their wood products is to be lauded. We have certified Triton’s unique operations in the past and are looking forward to working with them to bring the highest standards to this new project in Ghana.”

Later this year, Triton will present at the Forest Stewardship Council General Assembly in Malaysia and the HydroVision Conference in Brazil to forest certification experts and global hydroelectric reservoir managers about the benefits of harvesting submerged forests. This invitation to present demonstrates the growing interest in understanding how reclaiming flooded forests can bring economic and environmental value to local communities and global industries.