Features Harvesting Transportation
Is the truckers’ dispute over?

Dec. 4, 2014 - On February 26, 2014, truck drivers who haul containers to and from shipping terminals at Port Metro Vancouver and who are members of the United Truckers Association of British Columbia stopped work. They were joined two weeks later by members of Unifor – Vancouver Container Truckers’ Association. The drivers were protesting low wages and long wait times at port terminals.

Because the economy of British Columbia is dependent on commodity exports, the reaction to the work stoppage was one of great concern.

“If we cannot deliver coastal forest products in a timely and dependable manner through Port Metro Vancouver, we will lose our customers to offshore competitors,” said Coast Forest Products Association president and CEO Rick Jeffery. “This will have a disastrous ripple effect that will reverberate through our companies, impacting thousands of jobs and lives as well as the stability and economies of our communities and the province.”

The work stoppage, which cost an estimated $885 million per week, went on for almost a month, with drivers and their employers trading accusations and threats.

The other players – Port Metro Vancouver, terminal operators, ocean carriers, freight forwarders and customers – called on the truckers and the trucking companies to settle so that everyone could get back to work.

After the B.C. government threatened back-to-work legislation, there was a last-minute flurry of negotiations, and on March 27, Premier Christy Clark announced a settlement. And with that, the estimated 1,800 striking truckers got behind the wheel again and headed back to the port.

The news of the settlement was met with both a sigh of relief and a sense of resignation. The 2014 disruption followed similar walkouts in 1999 and 2005, and some people believe there could be more of the same in the future.

Critical port
Port Metro Vancouver, where the container truckers ply their trade, is huge in area and in importance to the local, provincial and national economies. Port jurisdiction covers more than 600 kilometres of shoreline, which border 16 municipalities, one treaty First Nation and 28 marine cargo terminals.

It is Canada’s largest port and is tied for second place (after Los Angeles-Long Beach) on the west coast of North America. In 2013, the port handled a record 135 million tonnes of cargo, an increase of nine per cent over 2012.

Port Metro Vancouver is served by a small army of licensed trucks, most of which are owner-operated. The trucks move thousands of containers throughout the Lower Mainland, the port’s hinterland. Trucks account for about one-half of the traffic in and out of the port, the other half moving by rail.

Truckers’ strike hurt forest industry
“Exports of Canadian softwood lumber to Asia – Japan, China, Taiwan and South Korea – increased dramatically beginning in 2008,” Council of Forest Industries (COFI) president and CEO James Gorman said. “But then they fell in the first quarter of 2014 due to the Vancouver port strike.”

According to COFI’s estimates, softwood lumber exports from B.C. to Japan and from B.C. to China each fell by almost 40 per cent between the third quarter of 2013 and the first quarter of 2014. The negative impact is not surprising because of the symbiotic relationship between Port Metro Vancouver and the forest industry. Softwood lumber is a big player at port terminals, says Gorman.

“The export of wood products is critical to the successful economics of the port,” he said. “Measured by tonnage, 32 per cent of outbound shipments come from the forest industry. No other economic sector is close to that.” In addition, Gorman says, almost two-thirds of total container exports carry forest products.

Eight years ago, five out of six containers that were shipped to Port Metro Vancouver from China returned empty. “Now it’s less than one in three,” Gorman says. “The difference is forest product exports to China.”

What caused the strike?
There were two main causes of the work stoppage at Port Metro Vancouver, says Gordon Payne, chairman of Harbour Link Container Services Inc. in the Vancouver suburb of Delta, B.C. For several years the truckers have had long waits to gain access to the port, and, once inside to complete a transaction.

“Before the work stoppage was called, some truckers had been waiting three to four hours for a single pick-up or delivery,” Payne said. “Because most of the truckers are owner-operators and are paid by the job, the lengthy waiting times reduce the money they earn. It’s no surprise they were upset.”

Severe winter weather in eastern North America had made the congestion worse; there was a shortage of intermodal rail cars, which caused containers to back up at Port Metro Vancouver’s terminals.

New technology to clear the air
The work disruption ended with the adoption of a 14-point Joint Action Plan to address the truckers’ concerns. The Plan was developed by the federal and provincial governments and Port Metro Vancouver, all of which have jurisdiction over different parts of the port’s operations.

According to the terms of the Plan, the federal government agreed to boost the trip rates paid by truckers by 12 per cent over 2006 rates.

There is also a new escalating fee arrangement to compensate truckers for excessive wait times. The fees – which are in fact penalties – will be paid by the terminal operators to the truckers. Drivers will be paid $50 after 90 minutes of waiting. After two hours that fee will go up by another $25.

Also part of the Plan is the Common Data Interface (CDI) project, which will collect digital records of truck entries and departures at gates and terminals. After the data has been collected and crunched, it will be used to help co-ordinate multi-shift operations and develop a centralized appointment scheduler for container trucks.

The CDI will also complete the installation of GPS technology in container trucks at the port. According to Transport Canada, which is helping to finance the initiative, GPS in every truck will provide a complete, accurate and real-time base of data which will provide routing and operational information to help manage congestion and wait times.

Is the settlement a solution?
Although the truckers have been back at work for six months, not all of them are pleased with the settlement and some of them have been making noises about going off the job again. The forest industry has its fingers crossed.

“Port Metro Vancouver is a vital link to the world economy for B.C. and for Canada,” said COFI’s James Gorman. “It is critical to have a lasting solution.”

There is certainly some reason for optimism. “Turn-times have gone down a lot since early July, between eight and 15 per cent,” said Philip Davies, principal of Davies Transportation Consulting Inc. in Vancouver. “That’s a significant decrease.”

On the other hand, says Darryl Anderson, managing director of Wave Point Consulting Ltd. in Victoria, B.C., a return to work does not necessarily mean a lasting solution. “Since trucking operations are so complex, it will take significant leadership and time for industry to define exactly what the Plan will mean in practical operational terms,” Anderson said. “I’m confident that everybody involved knows what’s at stake. The question is, can they put aside their individual short-term commercial interests and act for the benefit of the long-term health of Port Metro Vancouver? It’s uncertain.”

What will happen next? “It’s an ongoing adventure,” said Davies. 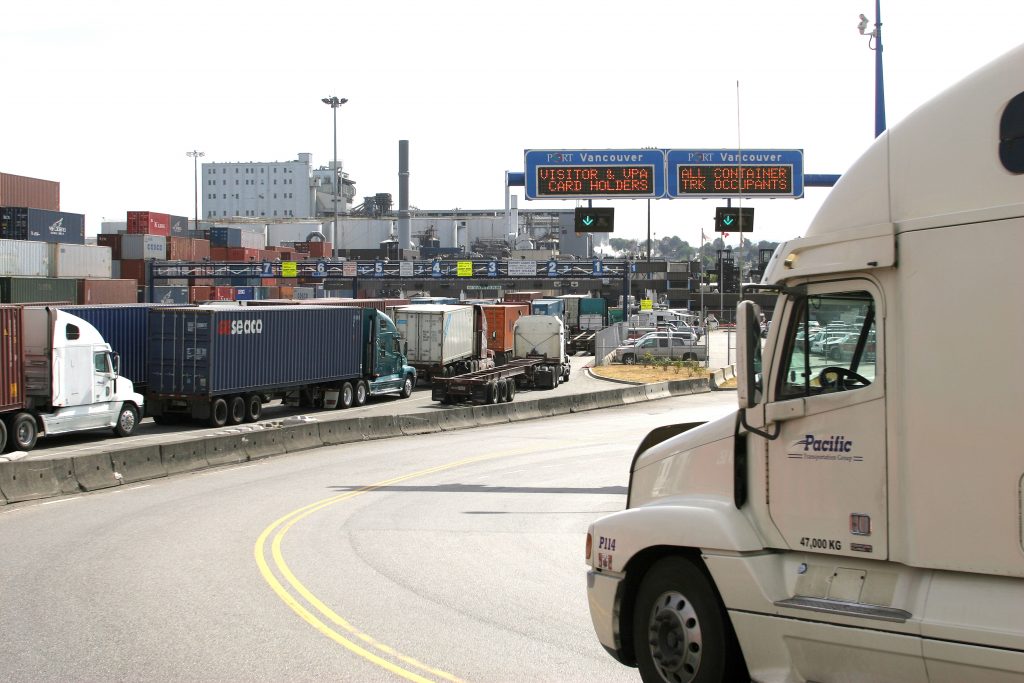