Canada’s forest industry literally consumes pickup trucks; they are tools and they have to work. That’s why truck buyers across the country have followed the Canadian Truck King Challenge with interest over the past three years – it tests trucks the way they are used – in the field. And that is always of interest to commercial and private buyers alike. Also many of these rigs do double duty. In fact, companies like Ford have estimated that as much as 25% of its SuperDuty trucks also serve as tow vehicles for RVers, boaters, snowmobilers and the equine crowd. Not to mention how many half-tons also haul groceries. 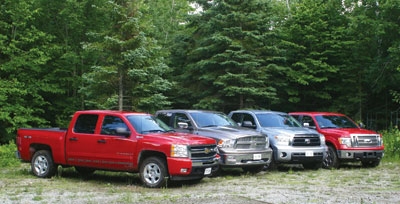 Canada’s forest industry literally consumes pickup trucks; they are tools and they have to work. That’s why truck buyers across the country have followed the Canadian Truck King Challenge with interest over the past three years – it tests trucks the way they are used – in the field. And that is always of interest to commercial and private buyers alike. Also many of these rigs do double duty. In fact

With these needs in mind, the Challenge has tested as many as 23 pickup trucks over three days with as many as 10 judges. Of course the last time we did that was in September 2007 – since then earthquake-like changes have rocked the automotive landscape.  For 2008 the industry was unable to mount a Truck King Challenge, and even now participation is still at low ebb, but I see it coming back, though for this year only a token four half-ton pickups came out to play at Head Lake, Ont., for a Canada Day celebration test.

On hand were Grant Yoxon of Ottawa-based Canadian Driver.com and old truck hand Eric Descarries of La Presse in Montreal. With these two Automobile Journalists Association of Canada (AJAC) truck writers – and me – we spent two days running back-to-back test loops. We did this empty, while towing and also ran an off-road course because the purpose of Truck King has always been to test pickups under real world conditions – just as owners do, across the country, every day. 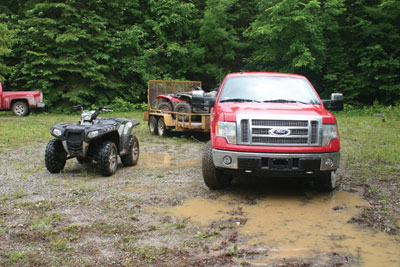 Of the trucks we had to test, the F150 Ford and Ram from Dodge are the newest in terms of their most recent updates. Both were ’09 models (neither brand plans any changes of any significance for the ’10 model year) and both featured body, powertrain and suspension upgrades. In fact both trucks have scored various wins from automotive publications and writer’s groups. The Chevy Silverado that we were given to test by GM Canada was the unusual one of the bunch because of its hybrid powertrain. This gas/electric system allows this pickup to start on electric motor power only, and during traffic stops the engine shuts down to save fuel. The electric motors also kick in at highway speeds to aid in acceleration, again saving fuel. This hybrid’s best feature though is probably the fact that operations are seamless and require nothing special of the driver. 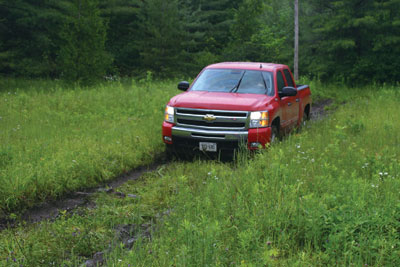 The Toyota Tundra we had on hand was one of the first 2010 models available in Canada. It was equipped with the new 4.6L V8 engine, which will now be the entry-level motor and has been specifically added to offer a fuel-efficient alternative to the powerful 5.7L V8 that powered this new model of Tundra since its debut as an ’07 model. Toyota is actually just the latest builder to pay special attention to fuel economy. Each of the others has cut fuel consumption as well, most by at least 10 per cent from previous generations.

So with these four pickups we spent more than 30 hours driving hundreds of kilometres, testing back to back. This last bit is key because as I’ve learned over a long journalistic career nothing highlights the good (and the bad) of one vehicle over another like driving them back to back. But to elevate this technique to the next level we do this type of testing on a fixed loop of gravel/secondary road/highway circus-style, following one another and pooling our conclusions on each truck over that measured track between rounds.

Intense Testing
The testing of these four pickups was as intense as any we have done in the past, but because of the small number we felt that to try and judge categories numerically wouldn’t work – the sample was too small. So, with only three judges we agreed that it was best to report our observations rather than try and declare a winner.

Gravel roads are great for three things: evaluating cabin noise levels, getting steering feel and driving dirt into every possible crevice on the truck. With the rain we had we managed all three equally. Consensus was that the Chevy and Ford were the quietest of the trucks. Not just on overall road noise, but they also deadened the pinging in the wheel wells from the gravel hits. Meanwhile on pavement, tire noise was low and with both engines at idle it was almost impossible to tell they were running. (Well, with the hybrid that is a bit deceiving because at stops the engine stops too.)

Steering feedback is good on all the trucks, but again Ford and Chevy seem to have it over the other two with a more controlled confident feel. Certainly with the Ford the new longer wheelbase adds to the overall ride quality – the trade-off is that it increases its turning radius. Inside though, the Ford puts this added length to good use as rear cabin space – adding almost six inches of floor space and giving Ford the edge in the spaciousness department over the others.

It was interesting to see that on the 2010 Toyota Tundra we tested, a fold-down cargo bed step has been added. An obvious add-on that mimics the Ford step, it’s good to see that Toyota reacts quickly to the changing market – not necessarily waiting till the next generational update to make build changes.

That said, it was noted on the off-road portion of our test, that out of all the trucks the Tundra has the most play between box and cab – it needs to be stiffened up. With the rain pelting (and mosquitoes attacking) we attempted the off-road in two-wheel-drive mode first with each of the trucks, but with the slick mud we were soon stuck. Still, we noted that the mechanical locker that the Chevy has in its rear differential provided the most traction before we switched to four-wheel-drive. From here, each truck preformed adequately with the Ford’s turning radius once again causing us to have to backup where the others didn’t need to.

Also on our off-road test we noted that the Tundra and the F150 persist in putting their trailer light connections below the rear bumper. We managed to bend both. These belong above or in the bumper – as the Dodge and Chevy have them placed.

Power Trip
Each of our test trucks was V8 powered with the Toyota sporting the smallest engine and the hybrid Chevy the largest at 6L. Interestingly, from a fuel perspective, the hybrid saved only about 1.0 litre/100 kilometres over the new 4.6L Toyota engine. And while this spoke to the strides made by Toyota to put a fuel efficient motor in its Tundra – the real difference emerged when towing.

The new Ram came to us equipped with the 5.7L Hemi engine that has been doing duty in that truck for several years now. The F150 was equipped with the 5.4L V8, which has also been around as long as the Hemi, but which was updated with new valves and coupled to an all-new six-speed automatic transmission (the Dodge stayed with the previous generation’s five-speed auto).

In fact, Dodge is now the only one that doesn’t run a six-speed tranny, so it’s obvious that multi-gear transmissions are playing much larger rolls in power and fuel management these days. (These are a far cry from the three-on-the-tree days.)  But these gearboxes also show off advanced computer programming with tow/haul settings that electronically change the shift points for acceleration and also allow manual control for use with engine braking on long grades. Many of these changes are innovations that have migrated from the HD truck segment. Frankly with what half-tons will tow now, it’s needed.

Trailer Towing
Our test trailer was a dual-axle landscape-type trailer with a tare weight of 2,400 pounds. On it we loaded two ATVs which I had on hand for testing. A new Yamaha Kodiak 450 and a ’09 475cc Honda Foreman fit our trailer and these weighed in at 629 pounds and 639 pounds respectively. So with the trailer included we put together a modest tow test weight of 3,668 pounds.

Respectable for any of these half-tons to tow, but far from a real workout. The towing capacity on the new Ford, for instance, has increased to 11,300 pounds – while payload has risen to 3,030 pounds as a direct result of a new frame designed with new high-strength steel (which despite its increased load bearing ability weighs 100 pounds less than the last-generation frame). This is typical of all the trucks now. Our trailer had what are known as “surge brakes” meaning it didn’t require an onboard brake controller – but it’s worth noting that while aftermarket units have been the norm for decades the Ford and Chevy now offer integrated controls installed at the factory.

While towing this trailer, once again the power and wheelbase of the Ford and Chevy proved to be the best combinations. The Dodge lacked only in its gearing, where a long second gear tended to bog a bit on hills while accelerating. The Toyota, while it handled the weight, used all its power and the transmission was worked hard to keep pace – this is an obvious trade-off for the improved fuel economy. Of course where neither was affected was on the Chevy hybrid. With its 6L Vortec engine it pulled with strength and confidence and the electric motors even have enough power on their own to move the truck and trailer from a standing stop on electric power only.

As for suspensions we concluded that our modest load wasn’t enough to highlight any major differences between leaf springs and coil suspensions – in fact the new setup on the Dodge felt pretty good. As for design – we try to be practical in our evaluations, but we are as swayed by a truck’s looks as any buyer. And while there isn’t a mutt in the bunch we have to admit that the current Ram is a very pretty truck – inside and out.

Next Year
While the field was small this year, it was obvious from our time behind the wheel that each manufacturer’s research and development team works hard at constantly improving the state of its trucks. And even the loss of a year in our testing surprised us with the fact that qualities or components that we considered superior just two or three years ago now seemed second rate by comparison – that’s how quickly things change in this highly competitive market; one in which sales of up to 1.8 million units a year are at stake. For this reason we intend to bring a larger field of trucks back out to compete in the next Canadian Truck King Challenge. Watch these pages in 2010.