Feb. 19, 2014 - This is the seventh year that the Canadian Truck King Challenge has pitted the most popular pickups in the country against each other. However how we do it each September is no different from what you do every day of the year – and that’s the point. So, the rain, mud and cold are a vital part of testing; my judges and I have to feel what you feel, contend with what you contend with and ultimately appreciate what you appreciate – and judge each feature along the way.

As in years past we tested at my IronWood site in Kawartha Lakes, Ont. We use a public 19-kilometre test loop that consists of a hilly gravel road, broken twisting asphalt and a smooth highway section. We take trucks out in groups of five and drive them round and round – switching drivers on each circuit until all five judges have driven all five vehicles. The trucks are always used in the same condition: all empty, all towing or all with payload. Back-to-back testing is the best way to compare vehicles.

It took us about 2 ½ hours to do a complete back-to-back test; then we’d head to the yard for the next five. We do this over and over for 10 hours a day for two days, making notes and scoring along the way. And while 19 kilometres doesn’t sound like much by the time we were finished, collectively, we drove over 4,000 kilometres.

So, what happened? Well, 2014 is going to be a big year for Ram; the work it has been doing for at least the past five years is all coming together now and it showed up in the scoring. The company’s technology, design work and the will to take chances crystallized in one unique pickup truck.

The overall points winner of the Canadian Truck King Challenge is the 2014 Ram 1500 powered by the 3.0L EcoDiesel with 8-speed transmission. This is a revolutionary setup – one that we feel is going to be copied very quickly – but it deserves credit right now. It takes guts to be the first and this small diesel from Ram works very, very well. Price-wise the diesel will be a $4,500 option; however, it will be available on every trim level except the absolute base.

At a lower price point (in our under 45K category) Ram did it again with the 2014 Ram 1500 powered by the 3.6L Pentastar V6 with the 8-speed transmission. This powertrain speaks to the other holy grail of truck ownership – power, capability with decent fuel economy. There was a time when this was simply impossible, remember? Not anymore. In large part this is due to the 8-speed gearbox – again a revolutionary step forward. For that matter all the Rams – 3L diesel, 3.6L V6 and 5.7L Hemi all came to IronWood with 8-speed transmissions. This gearbox worked well in all configurations during every test.

The three Detroit-sourced HD trucks were tested outside London, Ont. Because HD owners tow a lot, that’s what we do too. Each truck was outfitted by the manufacturer with a fifth-wheel hitch and we partnered with Can-AM RV centre towing 14,000-pound fifth-wheel RV trailers over a 300-kilometre route. The next day we stripped the fifth-wheels out and loaded up 3,000 pounds of IKO shingles and set off on a 200-kilometre route. Once again the judges switched up back to back during the driving.

In this HD category it was the 2500-series Ram equipped with the 6.7L Cummins diesel that won out – though just. Last year saw the Silverado HD in first place; however, for 2014 it still suffers from the dated interior, poor video screens and older software of last year. Mind you, we have already seen the 2015 Chevrolet and that’s all been fixed – but for now, we can only grade what we get. Ram was in a similar boat last year but for 2014 Ram’s chassis was upgraded and strengthened while the engine was also tuned up and converted to use the DEF fluid for cleaner combustion and better mileage (though still not the best).

Three categories: three wins
One high-tech addition this year was the installation of data readers in each truck. We contracted a third-party company (recommended by Natural Resources Canada) called MyCarma to have a technician on site both days to record and interpret the fuel economy data from readers they installed in each truck. We made a point of recording each truck in each condition. Empty, loaded, and towing. The resulting figures are as real-world as they get. During each stage of testing, trucks were hot-swapped by the judges (never shut off) as they traded vehicles. They idled between loops and recorded the fuel used by the judges as they tested acceleration, braking and handling. No Dyno testing here – these numbers are real and dirty, just like those that everyday owners might achieve.

Testing notes and overall summary
Payload this year was 1,000 pounds of patio stones on pallets. Trailers were twin-axle dumps and car carriers. Most trailers weighed in at 6,000 pounds – another at 6,100 pounds and one at 6,900 pounds. The weights varied because the trucks sent to us all had different limits – so we tried to give heavier trailers to trucks that claimed higher towing limits. Also, the smallest truck, the Toyota Tacoma hauled 3,500 pounds. All the judges agreed that generally all trucks hauled well, but the torque of the Ram 3.0L diesel with 8-speed automatic stood out; its air suspension also held the load level and felt firm on the road and made its attitude with a trailer on always level. The Tundras, while new this year and powerful, still suffer from a lack of chassis rigidity, though special mention is deserved for the new 1794 trim package. This has to be one of the most upscale interiors put in a pickup.

The Fords generally felt good during all the testing (and at the moment, they are the oldest models we tested) – but the surprise for most judges was how well the base 3.7L V6 handled the weight in the bed and while towing. Its overall cost and fuel economy was impressive. However, three of the four Fords we were given for testing had electrical gremlins in their trailer lighting hookups.

The new 2014 GMs are strong, trannies are smooth, but the ride is slightly twitchy under load and several judges had steering complaints. The new interiors are nice: they feature excellent materials and layout. They also had several innovative features in the truck beds such as integrated steps in the bumper and lighting under the box lips. On the fuel side, note how close the results are between the GM 5.3L V8 and the newer 6.2L V8 – way more power and very little extra fuel consumption.

The off-road is the shortest test. It’s done on a half-mile-long course consisting of muddy hills, rock-strewn fields, a water-filled trench and an off-camber test to get the wheels in the air. Three things showed up out in the field this year.

First, with builders looking for more aerodynamic advantages, they keep adding length to the front air dams, which resulted in several trucks scraping repeatedly through the course. Second, the mechanical rear differential locker on the GMs works well and is still unique; otherwise, the trucks all handled the course, except in the off-camber where the GM’s rear differentials nicely locked up when power went to the lifted wheel. Third, and this is a gripe that’s several years old, the Fords still have the electrical hookups below the bumper where they collect mud, dirt and grime.

As with many tests, much is based on opinion. However, it is educated opinion offered up by five Canadian automotive journalists with well over 150 years of combined trucking experience. Numbers do tell a tale, though, so it’s worth looking at the overall scores as averaged among the five judges.

The first thing that stands out is how close they all are. This means that there really isn’t a bad truck in the bunch. Each has strengths and weaknesses, but as in any competition there must be a winner and a loser, and we feel confident in our choices. 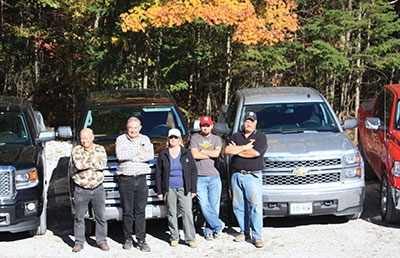 The judges for the 2014 Challenge were Eric Descarries This is the seventh year that the Canadian Truck King Challenge has pitted the most popular pickups in the country against each other.
Print this page