Canada's Truck King has been crowned, as our experts put these pickups through their paces.

One-ton pickup trucks are a small slice of the pickup truck segment – within the larger automotive segment. As such, you’d think the segment small enough to escape much scrutiny; certainly the lack of marketing publicity suggests that. Yet, the numbers are not as small as most would think.

According to DesRosiers Automotive Reports, the Honda Civic is the bestselling car in Canada at 42,412 units (YTD).

However, the bestselling truck is the Ford F-series with 74,362 sales (YTD). Now, that encompasses all Ford pickups (and I’m not even adding Chevy or Ram, so that gives you a sense of how big the segment is), but around 30% of full-size pickup sales are in the Heavy Duty segment. One-ton duallys are a smaller slice again, but on a percentage basis they outsell high-end luxury and performance cars across the country, and that’s a group that gets no end of attention in the media.

From a Fleet perspective, real-world testing of the one-ton segment is very important. After all, these vehicles work for a living, and how well they work – not what colour they are – is what buying decisions are based on.

This year the Canadian Truck King Challenge decided to concentrate on this segment; testing the Ford F350 head to head with the Chevy Silverado 3500 and the Ram 3500. Each of these was the Crew Cab, long box, 4WD, diesel-powered version equipped with a removable fifth-wheel hitch. Our testers were two 2012s (the Ram and the Ford) along with a 2013 Chevy. While we prefer to always compare same-year models, we conceded that the Ford is virtually unchanged for 2013. The Ram, though, will be substantially changed next year – but it is unavailable until the end of the first quarter of next year. So, we appreciate Ram being involved because while we were already aware of the planned changes for 2013 – namely, Cummins diesel updates, new chassis and new air suspension – having the 2012 really demonstrated not only the areas that were lacking but also how it compared to both the Ford and Chevy that were both new in 2011. In essence they have offered a truck doomed to lose – yet the fact the company is changing almost everything we could be critical of this year speaks to its competitiveness.

Testing this year was conducted in southwestern Ontario in and around London. The first day we ran the trucks empty from Toronto (200 kilometres (km)) to London, then we hitched them to three similar fifth-wheel RV trailers. These weighed in at around 14,500 pounds (lb.) each. We then spent the day doing a 400 km tour with the judges (of which there were five) switching up every 80 km. Each judge, therefore, was able to spend at least an hour hauling with each truck – and sit as a passenger on two legs to evaluate the interior design, comfort and conveniences in each truck from a crew perspective.

It’s worth mentioning right here that this is the fifth time we have run the Canadian Truck King Challenge in the last six years – skipping only 2008 – when the industry was in crisis.

How we decide which trucks to test has to do with the normal life cycles of trucks. In this case the three HD pickups are the newest offerings from the manufacturers, with the Ford and Chevy being all-new in 2011 and the Ram being new in 2010. Curiously though, as mentioned earlier, the Ram will be coming to us as an almost-new 2013 in the early spring.

Those who have been around for a while know this short three-year run is almost unheard of. Trucks typically have a generational life span of between five and seven years. Well, that’s what it has been historically, but moving forward I can see the market heating up. Competition is growing ever fiercer, in part because the buyers are demanding more and more capability. Payload and towing capability keep rising – engine output is growing – interior comforts and electronic conveniences are expanding.

Trust me – this is not the industry leading the market. This is the market (that’s you and me) demanding more from the builders. This statement is the indicator that the nature of the typical buyer of HD trucks is also changing. How so? Well, fleet buyers traditionally look for a fair saw-off between capability and price, as they buy in bulk. But small business (the one- to five-truck market), which is on the rise, is much more interested in capability and comfort – they still want a decent price, but are less likely to go for the cloth seats and rubber floors. And I think it’s also fair to say they do care how the truck looks.

What all this means from a testing point of view is that we as judges work to put ourselves in those shoes. This doesn’t even take into account that as much as 30% of this HD market is purchased by retired recreational-only haulers. They too have specific needs, which include having comfortable space for the grandkids.

So with all this in mind, we towed our fifth-wheel trailers through wind and rain (because it always rains during Truck King – just lucky I guess) on highways and byways. After a full day of towing, we put the trucks to bed. The following day was dedicated to payload. As with any test, we had to go with the lowest published weight, and this year that was the Ram at 4,600 lb. Roof Mart, an IKO company in London, loaded us up with pallets of singles, which weighed in at 4,480 lb. Each pallet was four feet wide, four feet high and five feet long. Watching the trucks drop under that weight was fascinating. We then set off on a 300 km loop, down to Lake Erie and back, where we once again cycled through the trucks as judges.

Judges’ Highlights
The 2013 Canadian Truck King Challenge took on the task of evaluating the three Detroit-designed one-ton pickup trucks from Ford, Chrysler and GM last month.  This is the fifth year the challenge has been held; each year looking at a different segment in the truck market. Last year, for instance, we tested the five most popular half-tons – however, this year the HD segment (which has had the most recent updates) deserved scrutiny. 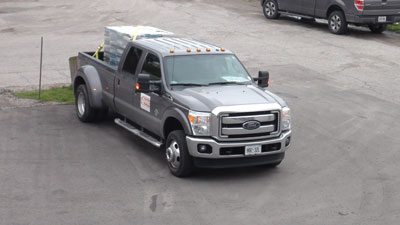 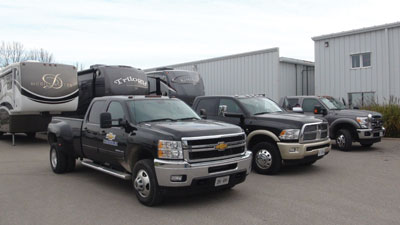 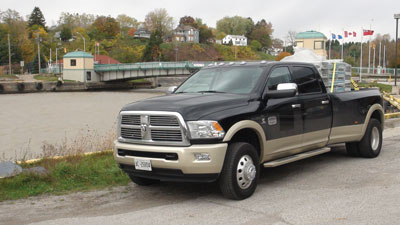 So, what were the conclusions? Well, in short, we collectively came up with the following insights: 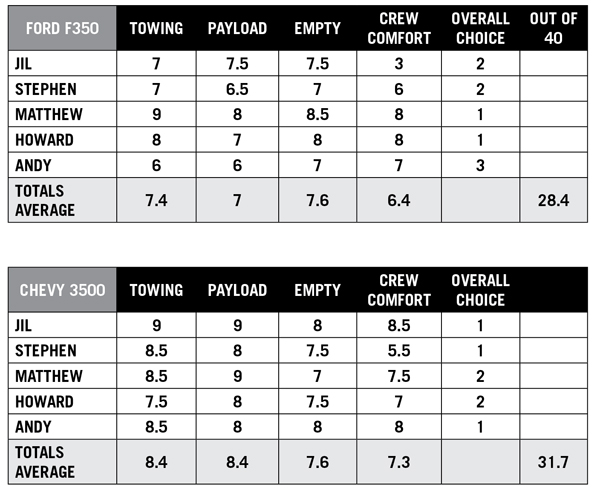 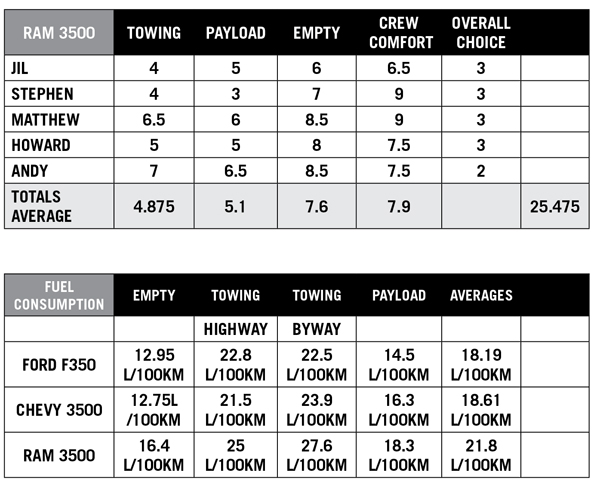