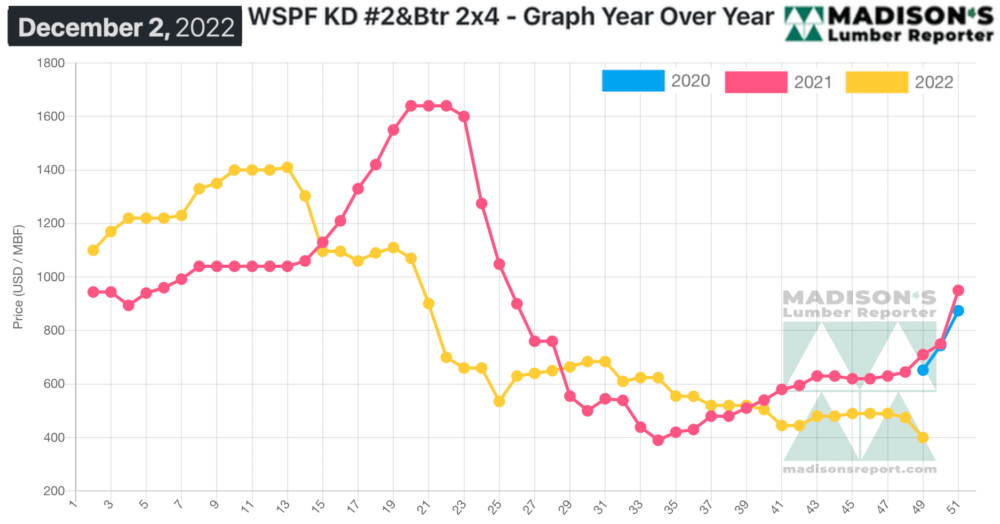 As December dawned winter weather came on across North America, causing the usual drop in construction activity, thus lumber sales. Price levels dropped accordingly, but only for benchmark items. Sellers were able to keep prices level on many dimension lumber and panel items.

However, the obvious slowing demand into the end of the year suggested further price drops to come. Producers responded by cutting production, which is normal for year-end. This year several large sawmill operators are curtailing a bit earlier than usual, taking more production volumes offline than in the past couple of years. This is a good response to market conditions, because it will keep supply better in line with seasonal dropping demand thus keep prices from falling much further.

Demand for North American lumber cooled off in concert with falling temperatures.

“Producers in Western Canada did their best to keep prices flat from the previous week, dropping lovels in the double-digit range on only a few bread-and-butter narrow R/L items.” — Madison’s Lumber Reporter 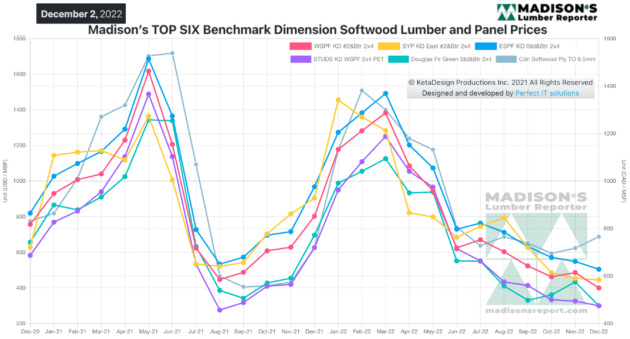 Amid persistently negative economic indicators and a potential nationwide rail strike, Western S-P-F purveyors in the U.S. reported decent sales as enough buyers were scrambling to find last-minute coverage. For their part, producers in the West were gearing up for holiday shutdowns, showing thinner lists with each passing day. Sawmill order files were around two weeks out. Prices of low-grade offerings were notably firmer than #2&Btr.

Sales activity of Western S-P-F lumber was lacklustre, said Canadian suppliers. Sawmill offer lists weren’t exactly ample, but the level of demand was even lower. Shipments continued to move with relative ease, especially considering the latest spate of winter weather across much of the West. There was a marked nervousness regarding trucking and rail delivery times, however.

“The outlook in the Kiln-Dried Douglas-fir commodities market remained despondent according to traders in the U.S. As a few trims stayed at or below green fir stud numbers, some producers were considering downtime to even out the supply-demand balance and stanch the bleeding of prices dropping. Inventories of wider dimension items remained tight as increasingly severe winter weather restricted access to bigger logs. Sawmill order files were into the week of December 12th. Most suppliers reported minimal transportation disruptions, a welcome and unexpected development for this time of year. ” — Madison’s Lumber Reporter