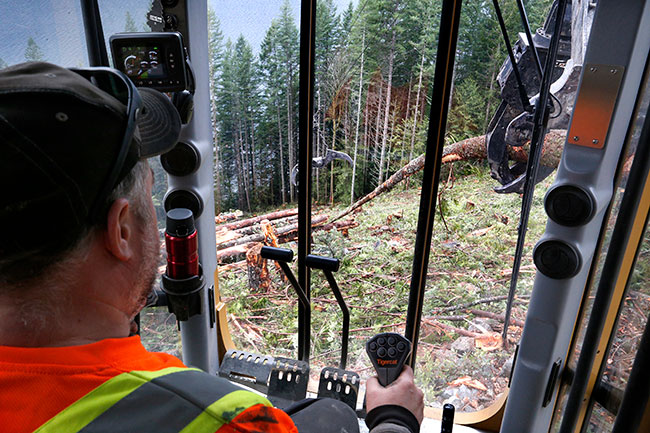 Loader operator Scott McLeod is hard at work on a grapple block near Powell River, B.C. this March, operating a Tigercat 880D logger with a T-MAR grapple.

Next to him is a Madill 122 yarder pulling log after log up a steep slope near Haslam Lake.

Born and raised in Powell River, McLeod has worked in a variety of tenures, and says every outfit wants things a little different.

But there is something special about working this tenure, he says: “It feels good to see the money go back to the community.”

He recounts how, a few years ago (around 2014), a grant from the community forest fund helped build an outdoor hockey arena.

“That looks fantastic, what they did there. And it’s perfectly laid out for kids to go and people with their children to have little tournaments and stuff. It’s a beautiful spot,” McLeod says.

It’s important to him that his work means more money in the community, he says. “Not just for me working here, but also kids get the benefit of it. It makes you a little bit more proud of your talent.”

Every year in Powell River, hundreds of thousands of dollars are spent on community projects: updated swing sets and playground equipment, a gazebo in the hospital garden, a steam sawmill display at the community museum, a thermal energy project, repairs to a local winter recreation group’s cabin, and, recently, $60,000 for the community’s COVID-19 response.

Including the 2019 dividends, Powell River Community Forest Ltd. had deposited $16,057,886 into the Community Forest Reserve Fund, from which grants are doled out to a variety of community organizations and causes. To date, 175 grants have been provided.

In May 2020, the community forest deposited a record-high dividend of more than $2.8 million, all as a result of the logging activities on Powell River’s 7,100 hectares of community forest area and allowable annual cut of 35,000 cubic metres.

And they’re not the only ones.

Right next to the Powell River Community Forest is the Tla’amin First Nation’s community forest where, with an annual allowable cut of 80,000 cubic metres, logging pays for community projects and capacity-building amongst the First Nation’s members. Through these efforts, more and more of its members gain the skills and equipment needed to succeed in logging.

The Powell River and Tla’amin community forests are some of the earliest created in British Columbia (2006 and 2007 respectively), and are examples of how small, locally-controlled area-based tenures can fit into B.C.’s largely volume-based, big-company system.

“Western Forest Products’ cut locally is about 500,000 [cubic metres a year], so that’s still a big part of the industry,” says Powell River Community Forest president Greg Hemphill. “They provide full-time employment, and for the town we need that going on. [But it’s] nice for the community to have a piece of the action.”

Getting people on board

At the time of writing in March, Canadian Forest Industries is in B.C. hosting a roundtable with Hemphill, along with Chris Laing, forest manager for the Powell River Community Forest, Craig Galligos, forest manager for the Tla’amin crown land tenures, and Kevin McKamey, Tla’amin Lake Contracting manager, to get a sense of how small community-controlled tenures can fit into the bigger picture.

From a contractor’s point of view, McKamey says it’s pretty similar to other tenures in that “everything is of a high standard now: environmental compliance, the footprint on the land.”

But there is a far greater overlap between logging activities and local citizens when it comes to community forests, Laing says.

“When you’re working as a contractor for our community forest, you’re in the spotlight. We’re right in the interface; you’ve got people coming through your cutblocks all the time. You are very visible,” he explains.

Maintaining access to recreation areas is part of PRCF’s goal, and a focus on road maintenance has meant more people can get out and enjoy the forest.

“You find a lot more vehicles out on the forest service roads, and people are getting to use all the local trails,” McLeod says. “It’s really nice to see. We very often run into people that are here from all over the world, which is neat to see because all our trails, like the South Coast Trail, get talked about more and more as word gets passed around. It attracts more people – it’s great.”

Another community interface comes from PRCF’s nine-person board made up of loggers and business-people. All the logging activities in the PRCF are reported to the board monthly.

“The board definitely approaches things with local decision-making [in mind rather] than as a corporation, so they are more inclined to invest money for the long-term where there is some risk than a corporation is,” Laing says. That kind of long-term investment makes more sense in an area-based tenure, he says.

This close working relationship with the community, both physically and organizationally, has helped get more people on board with the logging, Hemphill and Laing say, both because the community has more oversight and control of the logging and because they directly benefit from it.

“Those profits, a lot of them go to the same groups that are normally protesting against logging. It goes back into the recreation for building huts [for example]; it even goes to preserving timber,” says Laing. “We preserved over one million dollars’ worth of timber in Millennium Park downtown.”

This community oversight also makes locals more comfortable when logging goes on in sensitive areas, like in the local watersheds or near hiking and biking trails.

The majority of PRCF’s tenure area is located in the city of Powell River’s Community Watershed – that’s just what they have available to log, Laing says. But they are willing to spend a bit more on how the logging happens in those areas, or try new methods. One of those is a “strip thinning” technique where logging is done in eight-metre strips, leaving 30 metres between each strip. This was done to maintain views from a local bike trail. 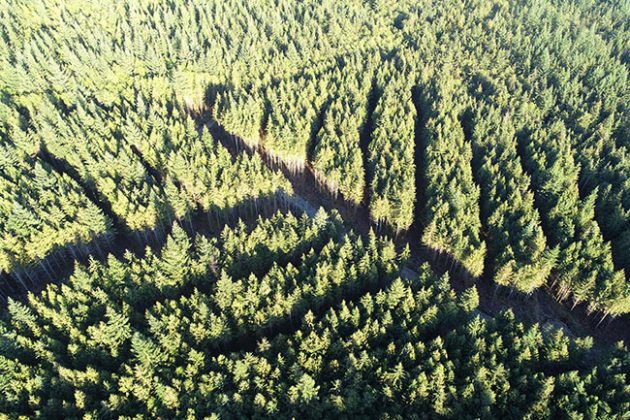 While both the Powell River and Tla’amin community forests have been successful, an important part of that success is the quality of forest they have available to them.

“It’s a lot of second growth fir, which doesn’t have the real highs, but it’s always been a pretty stable market there, so we’re pretty lucky that way,” Hemphill says about the local forests.

They also log hemlock and cedar in the PRCF, with the cedar going directly to a local cedar mill.

PRCF does mostly hoe-chuck logging, with some grapple blocks, Laing says. Most of the logging that happens in the Tla’amin forest is also ground-based hoe-chucking (about 80 per cent) while around 20 per cent is cable yarding, McKamey explains.

Part of what makes them successful is co-operation between the two community forests. They have shared the cost of a number of projects that benefit both groups, including roadwork, installing a new bridge and more.

Recently, the Tla’amin First Nation allowed the PRCF to share its log dump while a strike at Western Forest Products kept the PRCF locked out of other log dumps. And the PRCF, which doesn’t have its own logging crew, often contracts out its logging work to Tla’amin Lake Contracting.

Another important part of making a community forest work is the different stumpage calculation: “On the Coast, they take all the majors – so Western, all the tree farm licenses (TFLs), plus timber sales – average it all out, and they give us a 70 per cent discount,” Laing explains. “So, it’s transfer stumpage that would normally go to Victoria [but now] it goes to the community or the First Nation.”

Still, sometimes they end up with higher stumpage than Western Forest Products gets locally, Laing notes. But overall, it’s certainly a boon.

Put all this together, and you get a small but successful community forest that is able to provide work for local loggers in the off-season, respond to spot-markets when larger companies aren’t working or have shut down operations due to poor fibre prices, and support local mills and community projects.

It’s what can happen when you live, work and play in the same area, Galligos says.

“We’re from the community: we live here and we’re not going anywhere. We just try to make it all work with each other. We just have to keep each other in the loop about what the left arm and the right arm are doing, and try to provide solutions so we can keep going and try to keep our members bought into the community forest, because if we don’t, it gets hard to do anything. So, we have to show them that it’s working – not only for the logging, but for all of them as well.”

While Hemphill, Laing, McKamey and Galligos don’t think moving to area-based tenure is a cure-all for the industry, they would like to see more community forests and more cut available to them.

“You can’t be naïve,” Hemphill says. “You can’t have hundreds of these things all over the place. That’s not going to substitute for having a stable, large-scale, multinational industry that sells overseas and stuff like that.”

But, he would very much welcome government taking a look at which community forests have been successful, and providing them an opportunity to apply for an expansion.