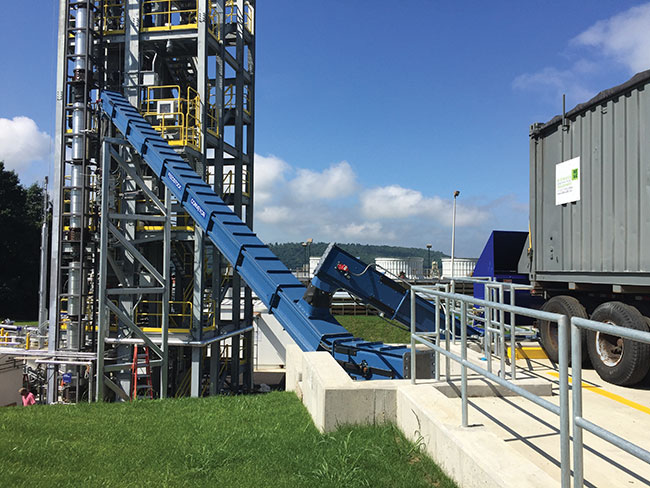 Material handling systems are too often an afterthought. When designing a plant, engineers typically focus on islands of expensive machinery and neglect to put serious thought into the systems connecting them. They end up purchasing the lowest-cost solution, which, although it fits the budget, hurts their customer financially in the long term.

Systems that handle woody biomass deserve more attention. Woody material is harsh on conveyor systems. Understanding how it affects conveyors and which conveyors design optimally handle it will go a long way to ensure your operation succeeds.

Challenge 1: acid corrosion
Wood naturally contains several acids, the largest volumes of which are formic and acetic acids. Once released from the wood, the acids react with the metal to form rust. Acetic acid is especially aggressive and can cause corrosion at only 0.5ppm in the air.

Acid will corrode metal wherever it comes in contact with: the top and side panels, the paddles (if metal) and the chain. Of these components, the chain is most vulnerable and the attack is somewhat invisible. Acids attack the chain pins and bushing, reducing their diameter until they fail under load. Interestingly, the pins end up being the fail point of most chains that handle woody material, even though the chain side bars are technically the weakest point.

Wood’s corrosiveness varies widely due to conditions and the nature of the wood. Species of wood differ in acidity. Some woods, like fir, tend to be only slightly acidic. Others like oak and Western Red Cedar, have low pH levels, typically between three and four. Soil conditions in individual geographic locals affect pH, too. How and whether wood has been treated also affect acidity.

Challenge 2: moisture
Moisture is the No. 1 enemy of conveyors. External sources of moisture such as rain and humidity attack conveyors from the outside while internal sources from the wood attack from the inside.

Different woods have varying levels of moisture. Green wood has a higher moisture content than dried wood. Wood that has been soaked in rain or barged down river will also have a higher moisture content. This moisture, like acid, will corrode the chain’s pins and bushings. As rust forms in these components, it further erodes them as an abrasive, compounding the damage.

The higher the ambient temperature, the higher the rate of corrosion as more energy is available to speed the reaction. Hot wood like fresh pellets is therefore especially corrosive. Conveyors made of mild steel will not last long handling hot, woody material.

Solution: big pins, move chains
To address corrosion, especially in high-volume applications, you’ll want to look for chains with oversized pins. Chains with pins like these aren’t common, so you will have to order from the conveyor’s manufacturer. But they will last longer than standard chains, making them worth the cost.

Also – perhaps more importantly – look for conveyors with chains than run outside the material path. Traditional drag conveyors run their chains along the bottom panel and through the material. This is problematic for a number of reasons, the least of which is it exposes the chain on all sides to the corrosive effects of acid and moisture.

Solution: conveyor finish
In dealing with corrosion, you should also consider the conveyor’s finish. While painted steel is the cheapest solution, it’s also the least effective at protecting the conveyor. The bond strength of paint is approximately 600 psi, so it will chip and peel fairly easily. Paint inside the conveyor will not last long.

Powder coat is a better finishing option. It costs more than paint, but its bond strength is higher, and it will more evenly coat the conveyor surface, providing better protection. Galvanized steel is an even better choice. The zinc layer will chemically protect the steel underneath from rusting, even if the coating is scratched. It is also far stronger than powder coat; its bond strength is about 3,600 psi. Galvanized finishes will not deteriorate from weather (lightning strikes and catastrophes excluded), and they’re less reactive than paint. For applications where the wood has been exposed to sea salt, galvanized finishes become necessary. Salt acts as a catalyst in the reaction between water, air and steel, speeding corrosion.

For high-temperature applications, such as handling fresh wood pellets, stainless steel becomes the only economic choice. You are essentially throwing out your money if you purchase a mild steel conveyor for such applications.

Challenge and solution 3: friction and wear
Woody biomass not only damages conveyors with acids and moisture but also with abrasion. This one isn’t hard to figure out: woody material isn’t soft. It scratches. It packs together and wedges.

To deal with abrasion, again look for a solution where the chains don’t run through the material. Also, opt for a twin-chain conveyor instead of a single-chain solution. In a single-chain conveyor, the material will pack either on the left or right chain flight as it enters the conveyor. As it does this, it will tweak the chain, damaging it and reducing overall operational efficiency. With a twin-chain conveyor, this can’t occur; the paddles are held on either side so they cannot twist and the chains run in troughs that don’t allow them much movement (if the conveyor is so designed).

As for the wear on the bottom panels, you can opt for abrasion-resistant steel plating to increase the life of the panels. More importantly, look for conveyors with paddles and chains that don’t drag along the bottom panels. (The drag in your drag conveyor shouldn’t refer to internal components.) More so than wood abrasion, chains and paddles that run along the conveyor floor will quickly wear through the panels. Not only is this wear a problem, but when the chains and paddles drag along internal steel surfaces, the resulting friction also decreases the conveyor’s efficiency. This means you will spend more money powering the conveyor to overcome its internal friction rather than moving material.

Twin-chain conveyors are best able to get the paddles and chains off the bottom panels. Chains can be placed in their own paths, and the panels they hold can be designed with tolerances that don’t allow the chains to scrape the panels. Getting the chains out of the path of the material also lessens the volume of material that will come between the rollers and the sprockets. If foreign material interferes in the engagement of the chains and the sprockets, the roller can be damaged.

I recently had a conversation with an engineer whose client had to replace the bottom panels in their conveyors every six months. This client was using a traditional drag conveyor with the chain and paddles running along the floor. The result was a system with a high operating expense. But this does not have to be you. A well-designed conveyor will help ensure you do not face the headaches that come with a poorly implemented and low-quality conveyor system. Better systems will cost more up front, but they will save you money down the road.