Tricking a beetle that is devastating ash trees in many parts of the world into thinking there is love in the air could be hugely beneficial to the forestry industry. 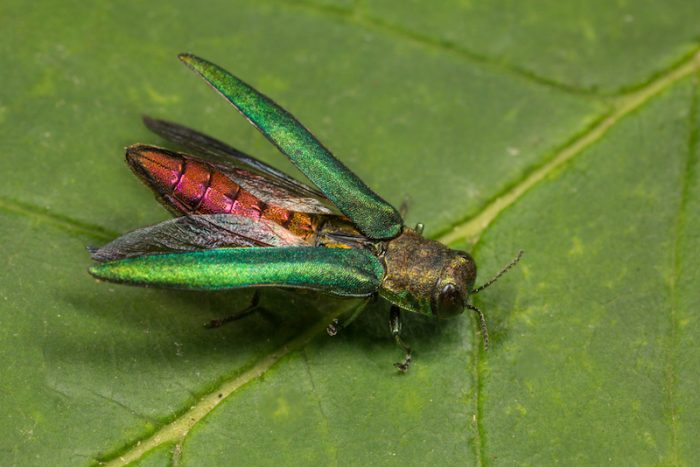 A chemistry student at the University of Chester in the UK has been working with industry leader International Pheromone Systems to meet the challenge of producing a “matchmaking” synthetic pheromone for monitoring and managing an insect responsible for the global destruction of millions of trees.

A native of Asia, it is thought that the Emerald Ash Borer was introduced into North America in imported wooden packing material. Ash trees have been widely planted in urban situations in North America and are also economically important as a commercial timber crop. Adult beetles appear from mid-May to late-July and must feed on ash foliage. They are slender and elongated, measuring between 7.5 and 13.5mm long and are metallic emerald green in colour. Adult females live for about 22 days and males slightly less. The females each produce between 60 and 90 eggs.

Now a serious economic pest, the Emerald Ash Borer, Agrilus planipennis, is devastating ash trees in Eastern Europe, Georgia, North America, Canada and China and could spread further as a result of trade in timber goods. Having already killed an estimated 30 million trees in North America, it presents a serious threat to ash trees all over Europe and is included in the 20 priority quarantine pests of the EU. With the spread of the Emerald Ash Borer there is a shortage of monitoring traps needed by forest managers.

The most effective solution for managing insect pests is a holistic approach called integrated pest management (IPM). IPM involves using a variety of different strategies in combination to maintain insect pest populations below a level that is deemed to be economically harmful. Insect pheromones play a very important role in any IPM system. Lures that slowly emit insect pheromones are used in traps to monitor and, in some cases, control specific pests. IPM helps to balance the scales in favour of beneficials such as natural predators. As a result, pesticide use is decreased and diversity is increased.

Technical manager for International Pheromone Systems Dr Sam Jones explains: “Insects that are usually controlled by natural predators in their native regions are able to proliferate rapidly when reaching new regions with suitable conditions. Continued growth in international trade introduces pests to new regions and global warming often increases the range in which the pest can effectively survive and populate. This is the case with the Emerald Ash Borer.

“An effective pheromone lure for monitoring and management of this pest is therefore of utmost importance. The most efficacious attractant for this species consists of a synergistic mix of a female produced sex pheromone and a volatile chemical produced by ash foliage which is used by the beetles to locate their host. We had access to the green leaf volatile but were previously unable to source the required pheromone component. We’re delighted that the pheromone component has been successfully synthesized during this project using a novel synthetic route.”

University of Chester master’s student Ashley Broughton, successfully worked on the project in the chemistry labs under the supervision of senior lecturer Dr Noha Ziedan. Broughton worked on producing a stable, synthetic ‘Pheromone analogue’ which is a chemical compound that is similar in construction to the actual pheromone.

Ziedan explains: “We were really pleased to have the opportunity to be involved with this commercial and extremely important project and very proud of Ashley’s achievement. The result is an analogue that is synthetically accessible over a short time, high purity and can be produced at a much lower cost.”

The project was funded by the European Regional Development Fund (ERDF) 2014-2020 programme as part of the Eco-Innovation (Cheshire and Warrington) Programme.

IPS came up with the project proposal and together with the University interviewed three students for the best fit. IPS regularly met with Broughton and Ziedan during the year-long research project.

Ziedan added: “We are now interested to hear from potential customers and will start manufacturing when we know there is a clear demand. The larger the volume we produce the cheaper it will be for customers.”

Broughton said: “I like to think that the project contributed in a small way to the advancement of pheromone insect control. I benefited from the project by gaining experience of laboratory chemistry, particularly analytical techniques.”