2009 was a tough year for the residents of Plaster Rock, N.B. Perched high above the Tobique River, the hamlet of about 1,200 people saw its primary employer close its doors for nine long months. Many here envisioned the curtailment at the Fraser Papers Plaster Rock sawmill as the final chapter in the mill’s century old relationship with the town, but, thankfully, they were wrong. 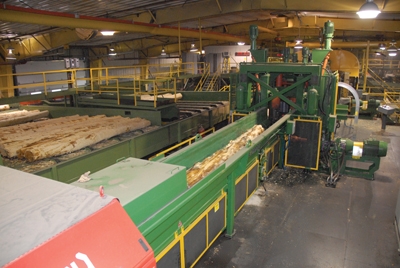 The new Comact OLI on the large line at the Plaster Rock sawmill was part of an almost $18-million upgrade. 2009 was a tough year for the residents of Plaster Rock

“There was a huge sigh of relief around Plaster Rock when we announced that we would be restarting the mill,” says Paul McKinley, general manager lumbermill operations for Fraser Papers. “We have employees who are the fifth generation of local families that have earned their living from this mill, and the company has been the backbone and the economic engine of this town and the region for as long as anyone can remember. There’s no doubt, it has been a roller coaster ride, but at our reopening celebration in early December everyone was thrilled that the Fraser Papers era in Plaster Rock didn’t end at 103 years.”

Not only did the mill reopen, but it was given a new lease on life thanks to an almost $18-million upgrade that included a new biomass-powered energy system, two new kilns with a common wall that are heated by the new energy system, and upgrades in the sawmill production process. It’s an investment many here hope is a sign of better times ahead for the local mill and the hard hit Fraser Papers contingent of forest industry assets.

The upgrade at the Plaster Rock mill had been approved in the fall of 2008, and on Feb. 13, 2009, crews processed the last log before shutting down for the scheduled project. However, everything changed four months later with the work well underway as Fraser Papers went into creditor protection. That brought everything to a stop.

“When we went into creditor protection, we had already gutted most of the sawmill, we had started work on the energy project, and really nothing was operational except for the planer mill,” McKinley explains. “At that point there was no turning back if we wanted to run again. We had to finish the work in progress.”

For two months, the mill site and the project sat idle while Fraser Papers negotiated a repayable loan from the Province of New Brunswick. With the government financing finally in place, crews started work again, but with lumber prices and demand for wood products and chips still low, McKinley says they were not in a major hurry to finish the work.

“With the markets the way they were it worked in our favour to take our time with the project,” explains McKinley. “The good news is, that allowed us to complete this project carefully and safely, employ many of our own previously laid off employees to do the installation labour, finish the project without incurring overtime costs, and reopen when we thought the timing was right.”

When the work resumed, McKinley says the company brought in a team of 25 to 30 people, including the mill’s entire maintenance team, some of the operators, and several helpers. On Nov. 16, 2009, the sawmill kicked into gear and officially started up again. The planer mill followed a few weeks later and, by early January of this year, about 175 people were back at work.

“These have been very tenuous times for us,” McKinley adds. “With the support of our employees, the New Brunswick government, our owners, and our suppliers, we have been able to put some of our difficulties behind us and move on.”

Of the almost $18 million spent at the mill, $10.5 million went to the energy system, which was supplied by London, Ont.-based KMW and includes a Cleaver Brooks 80,000-lbs-per-hour steam generator and other major components such as an efficient automatic fuel bin and 1,200 feet of steam line that was designed and installed by Design Build Mechanical of Bathurst, N.B. (for more on the energy project see the January/February issue of Canadian Biomass or visit www.canadianbiomassmagazine.ca). The balance of the budget was spent on the new kilns and the sawmill improvements.

Each of the two new kilns, which were supplied by Victoriaville, Que.-based MEC Dry Kiln, offers a capacity of 326,000 board feet of rough lumber. But these are not your ordinary kilns says Earle Fawcett, who was the lead employee on the kiln project team and is the mill’s maintenance superintendent. “There are some high-tech details,” he explains. “One of the major advantages of these kilns is that we used regular CN Rail track in the kilns, but the tracks are heated, so no salt is needed in the winter months.” 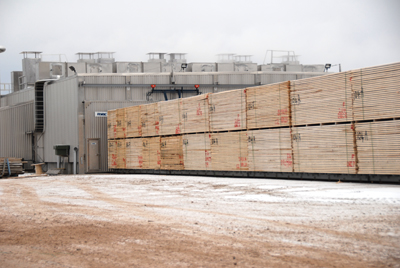 McKinley adds that the heat for the tracks comes from waste heat from the energy system, not live steam, which is the normal method of heating kiln tracks. He adds that the kilns are single pass rather than double pass but include a double set of fans, heating coils and other major components, which he says is more efficient for the 6 ft. x 6 ft. bundle sizes produced at Plaster Rock rather than the industry standard 4 ft. x 4 ft. bundles. “There’s probably not a more energy efficient kiln out there,” notes McKinley. “Basically, we need less biomass to dry the same amount of wood and we are anticipating that we will realize a reduction of about 12 to 15% in the heat needed for the kilns.”

Today, just over half of the mill’s production is dried in the new MEC kilns with the balance of the mill’s kiln drying being carried out in eight drying compartments, which the mill converted in-house from what was previously a large hardwood pre-dryer.

Most of the changes in the two-line sawmill were on the larger of the two lines and were upstream from the line’s Sawquip canter. “We had one homemade step feeder leading into our canter twin, which is our large line that handles 65% of our production,” explains mill manager Winston Craig. “We basically replaced everything from the debarker outfeed to the canter with Comact equipment, including a pair of wave feeders and an OLI cs3 optimized log infeed with C1 scanning and rotation confirmation technology.”

The new Comact gear provides the mill with true shape scanning of the logs, auto rotation, and skew, side shift  technology. “That was the biggest part of the sawmill upgrade,” adds Craig.

On the small line, which also has a Sawquip canter, the mill replaced an obsolete automatic log turner with a new Sawquip turner, which is only the second one the Berthierville, Que.-based company has produced. The first one went to a mill in Manitoba.

Other upgrades were also completed in the sawmill just before the trimmer optimizer, where all of the scanning and fencing was upgraded. The scanning upgrade included doubling the laser spacing and replacing the existing scanners with high-definition plan view sensors, while the fencing system was upgraded by Sawmill Equipment Corporation on a subcontract from Newnes-McGehee (USNR).

As with the energy system installation, most of the upgrade work in the sawmill was handled by the mill’s maintenance staff and millwrights. The biggest challenge in the sawmill was that the entire line had to be raised three feet to accommodate the new infeed. “We are on a concrete floor so it was either lower the new infeed or raise the old equipment on the line,” Craig says. “We chose the latter and essentially ended up cutting the legs out from underneath the line and then welding stilts to the supports. Comact was very helpful with this.”

Production flow at the upgraded mill starts when incoming log trucks are unloaded with a TT16030 Tanguay mobile knuckleboom loader. 75% of the logs coming into the mill are tree length, with the balance cut-to-length. The logs can be hot loaded into the production process, but most are put into a holding area for later use. A pair of Barko 275A stationary knuckleboom loaders feed the cutoff saws where a 16-ft. length is the desired outcome, although Craig stresses they will cut other lengths to utilize the entire log when possible. Any waste material falls onto a conveyor and is transported to an older model drum debarker and then into a 75-in. Forano chipper. Logs for the sawmill are then sent to one of two conditioning ponds. One pond is for the small log line, while the other can feed either line. The mill has three debarkers – a Cambio 24-in. ring debarker feeds the large line exclusively, while a second 24-in. Cambio and a 17-in. Nicholson A5 high-speed model can direct logs to either line.

Logs going to the large line are moved onto one of four sorting decks and then the new Comact wave feeders transport them to the optimized infeed for scanning. A Comact log turner uses the scan information to position the log for the Sawquip canter, which is equipped with VGH heads from Iggesund Tools. The canter is followed by a PHL bandmill and a Newnes stub arbour edger optimizer for side boards. The cants go to a Coe Newnes-McGehee (now USNR) 10-in. curve sawing wiggle box. Anything requiring remanufacturing is pulled at this point and sent back to the edger or the chipper.

Logs going to the small line come out of the debarkers and then move up a Comact wave feeder to the new Sawquip log turner and then the canter before going through a positioning module and a gang saw with 8-in. capability.

Rough lumber from both lines meets at the mill’s sorter, which is a Newnes 82-bin J-Bar model, followed by a Newnes stacker. Packages coming out of the stacker are 6 ft. x 6 ft. and can be up to 16 ft. in length so heavy-duty Caterpillar 966 loaders are used to move the wood to the kilns.

Following the drying process, the rough lumber is then processed through one of two Coastal planers. One planer handles dimension lumber while the other processes the mill’s specialty products. Wrapping and strapping for both lines is handled at a single Samuel strapping station and then the finished packages are put into inventory for shipping.

The mill is now back up to running on its standard two-shift basis, meaning it can produce approximately 150 million board feet per year. Sizes range from 1×3 in 6-ft. lengths to 2×10 in 16-ft. lengths. Most of the mill’s product is sold into building supply stores in the northeastern U.S. and Canada or is used in the construction sector.

Back in the town of Plaster Rock, business seems to be starting to return to normal now that the mill is back up and running. That’s definitely the case at a trendy coffee shop and restaurant that overlooks the main street and the mill. “We’ve really noticed a big improvement in business since the mill started up again,” says one of the daughters of the owners of Bistro 221. “We’re happy to have Fraser Papers back.” She’s probably not alone.