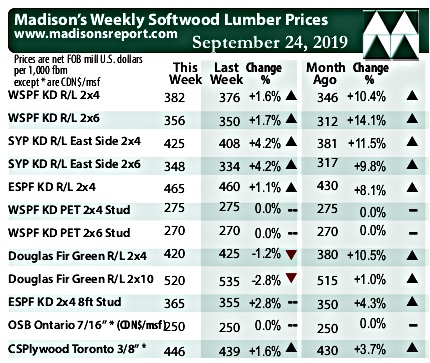 The mix of different types of building that make up the critical U.S. housing market have changed drastically since the epic U.S. home building crash of September 2006. While all acknowledge that the statistics will not soon — or ever — again be at 2.5 million housing starts annualized, there are many and varied interpretations of this new mix of U.S. home building data. Multi-unit starts continue to dominate, by a much higher ratio than previously. For several years since the U.S. housing recovery, economists held on to the idea that the ratio of single-family starts would eventually recover to previous levels. However what is actually happening to date is increasing five-unit and especially two- to four-unit starts, while single-family starts languish at the lower ratio reached around 2011.

Since multi-family starts use less wood, and different types of wood, this change in building practices is going to affect the North American sawmilling industry. Conversely, with each passing week more jurisdictions around the world authorize multi-story wood building, and embark on projects using cross-laminated timber and other advanced engineered wood products. So while the demand for standard 2x4s might not be great, that for specialty and higher-value lumber products looks very bright indeed. Keep reading to find out more:

Last week was another of rising lumber prices, even as a glowing U.S. housing starts report came out and more Canadian sawmills announced closures and curtailments. This week’s benchmark lumber commodity Western Spruce-Pine-Fir KD 2×4 #2&Btr price was U.S. $382, up another +$6, or +2%, from one month ago when it was U.S. $346 mfbm. Narrowing the gap from the highs of summer 2018, compared to one year ago this price is down -$44, or -10%.

Rail service in Western Canada was getting sloppier by the week. Even though producers needed less equipment than usual in view of closures and curtailments, they regularly got shorted on cars. — Madison’s Lumber Reporter

After getting many decent-volume deals done in recent weeks, Western SPF purveyors in the U.S. reported a noticeable step back in the pace of trading last week. Players stressed that demand was still strong, and this was just a sign of buyers receiving their loads and working through their own inventories for the time being. Producers pushed sawmill order files into the first two weeks of October on virtually all commodity items. Wholesalers and distributers were slightly busier this week than mills, thanks to their marginally-lower-than-replacement-level prices and their ability to ship a bit more quickly.

For their part, WSPF producers in British Columbia described a steady pace of sales last week, with sawmill order files stretching out to the week of Oct. 7 on most items. Wet weather in some pockets of Alberta constricted log supply there, forcing some mills to cut production for a few days intermittently.