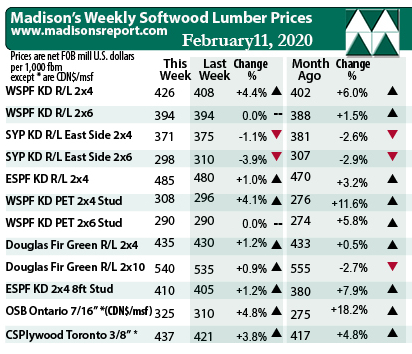 What a month for big news in forestry February 2020 has been so far, with last week’s U.S. Commerce Dept.’s announcement of preliminary lowered softwood lumber duties on Canadian wood imports, and a potential resolution to the extremely long-lasting forestry labour disruption on British Columbia’s west coast just this week.

As well this week the Western Wood Products Association’s monthly Lumber Track shows Canadian sawmill capacity utilization starting to recover from brutal lows in the first half of 2019, while in the U.S. it remained essentially flat over the previous year. U.S. sawmill production as per cent of practical capacity for the first eleven months of 2019 rose from the early months of 2019, and is at 84 per cent, from 86 per cent for the same time in 2018. Canadian sawmill production as per cent of practical capacity recovered from brutal lows in mid-2019, to 80 per cent in January – November 2019 compared to 88 per cent the previous year.

On the west coast of British Columbia, Western Forest Products and the United Steelworkers union representing more than 3,000 of its striking forestry workers have agreed to the terms of a tentative collective agreement. The union’s bargaining committee is recommending that its members accept this agreement.

Solid demand continued for Eastern stocking wholesalers last week, many of whom took their sales calls while schmoozing at the Northeastern Retail Lumber Association expo in Boston, Mass. The atmosphere there among attendees was apparently bullish. With another week of decent weather across much of the Eastern Seaboard, customers bit the bullet and bought “insurance trucks” of lumber, studs, and panels to keep their inventories above water.

The below table is a comparison of recent highs, in June 2018, and current Feb. 2020 benchmark dimension softwood lumber 2×4 prices compared to historical highs of 2004/05 and compared to recent lows of Sept. 2015: