Rosario Poirier knows the wood products business well, and he fully understands what needs to be done for smaller producers to stay alive in a competitive market. “A business based solely on timber doesn’t work anymore,” emphasizes the savvy value-added producer from the small village of St-Alphonse in eastern Quebec’s Gaspésie region. “Sawmills like us simply don’t have enough volume, so we must focus on value-added products.”

Poirier, who started his small sawmill business in 1973, has seen many changes over the past 37 years and has adapted to keep up with market demand. He’s gone from a one-man part-time show to a thriving company with 40 “dedicated” employees, including his granddaughter Patricia, who is the third generation of the Poirier family to work in the business. She is following in the footsteps of Rosario’s son, Luc.

It hasn’t been an easy ride, but both Rosario and Luc say the secrets to success include respecting the budget, seizing the business opportunities when they are there, making decisions without administrative delays, and thinking value-added. “Find a niche. This is a must,” notes Luc. “Small sawmills like ours have to diversify. It’s the only way to survive.”

Rosario produced cedar shingles in the early years, but moved into sawing aspen in the 1980s when he installed some new equipment, including two debarkers, a twin saw manufactured by PHL, a trim saw, and a planer.

In the late 1990s, Rosario and Luc decided to move more towards value-added, producing aspen components. It was a natural fit for the company with the required raw material for both primary and secondary production available locally from Temrex Forest Products and the forest Co-operative of St-Elzéar through its crown land. This accounted for 60% of the total raw materials needed by the Poiriers, with the remainder secured through agreements with owners of private wood lots in the area under the Syndicat des Producteurs de Bois de la Gaspésie, which is a local union of woodlot owners.

“We had the raw materials, but to make secondary processing a successful venture, we needed a dry kiln,” says Rosario. “We chose a Cathild model, which became the first dry kiln ever installed in the region.”

Moving to secondary processing became exceedingly important for the Poiriers in 1998 when they lost a significant portion of their timber supply. The same year, they launched a value-added facility in East-Bonaventure, a town about 30 kilometres from St-Alphonse. In the early stages, the East-Bonaventure plant operated with only a planer and several manual cut-off saws. However, in 2000, they purchased a CRP2000 finger-joint machine from Conception R.P. that runs at 120 blocks per minute, and then five years later, they acquired a Wagner humidity sensor, which was installed just after the planer. During the same time period, they acquired a 26-bin automated sorter and a conveyor system from Fabrication Delta.

While expanding the East-Bonaventure facility, the Poiriers didn’t forget about the plant in St-Alphonse, installing an Autolog scanning system and a wood residue-powered thermal power plant along with two additional dry kilns ­­– Wellons FEI front-loading models with a capacity of 90,000 board feet each. Rosario jokes that the power plant was good for the business, but cost him one of his much looked forward to hunting trips. “We had been searching for this type of power plant, but most of them were in Western Canada,” he recalls. “We were just leaving on a hunting trip when we heard about an auction in Minto, N.B., which isn’t too far from us so we made a last minute change in plans. In the long run, I have to say it was worth giving up the hunting trip. We got a really good deal on the power plant and it has become a very valuable piece of equipment for us.”

With the purchase of the thermal power plant, some additional work was required at the St-Alphonse site, including modifications to the Cathild dry kiln so that it could run on steam instead of propane, and the installation of a screening system so that bark produced by the sawmill could be used by the power plant.

As the demand for the Poiriers’ value-added products continued to grow, so did the business, and in 2007 a 24,000 square feet building was added to the St-Alphonse site at a cost of $3.5 million. They also consolidated both production sites, moving the equipment from the Bonaventure site to the new building in St-Alphonse. While making changes, they felt it was a also good time to automate and installed a CRP180 feeder that can process 189 pieces per minute, a Scanwood scanner provided by Automatisation JRT, and a CCS1000 automatic saw that operates at approximately 600 feet per minute. They also moved the CRP2000 finger-joint machine to the new building.

In February 2008, the Poiriers made another bold move, branching out into the production of energy logs or briquettes when they bought a CF Nielsen BP 5500 briquette press. “There are less expensive machines on the market, but we wanted to buy the best available and I believe we were successful,” says Rosario, adding that the press consumes wood residuals from the plant.

They are also keeping their options open. “We know that there will always be a need for cat litter,” he adds, noting that they can fall back on that market if they need to.

Even with the briquette press in place, the Poiriers weren’t done in the expansion department. In the spring of 2009, they installed a new Baker band saw and a Yates A-20 planer. This new equipment replaced some of the mill’s original equipment that was installed in 1973, and is used primarily to manufacture pallets. “We are very satisfied with this equipment,” says Rosario. “We had a few start-up problems, but it was really nothing serious. A technician came from Quebec City the same day and by 10 p.m. that night everything was set.”

“The new equipment operates at 200 feet per minute, but it can be increased to 800 feet per minute if the need is there,” says Steven Allain, Patricia’s husband and the plant’s electrician.

Like the business itself, the Poiriers’ customer base has also grown, and today they supply components to window and door manufacturers, wood for snow boards, and other smaller wood components used in manufacturing consumer and industrial products. In addition to selling their products in Canada, they export to customers in the U.S. In order to keep a competitive edge in the marketplace, the Poiriers have achieved Forest Stewardship Council (FSC) certification, and have earned C-TPAT (Custom-Trade Partnership Against Terrorism) accreditation.

Martine Frigon is a freelance writer based in the Quebec City region. This article was originally published in our French language industry magazine, Opérations Forestières, and was translated to English for Canadian Wood Products. 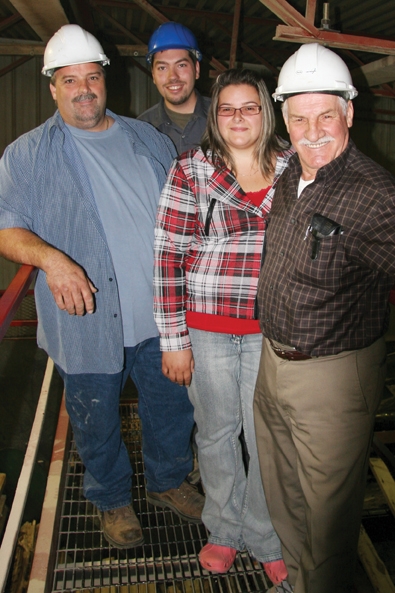 The Poiriers have survived by producing value-added products. From left to right are Luc Poirier Rosario Poirier knows the wood products business well
Print this page