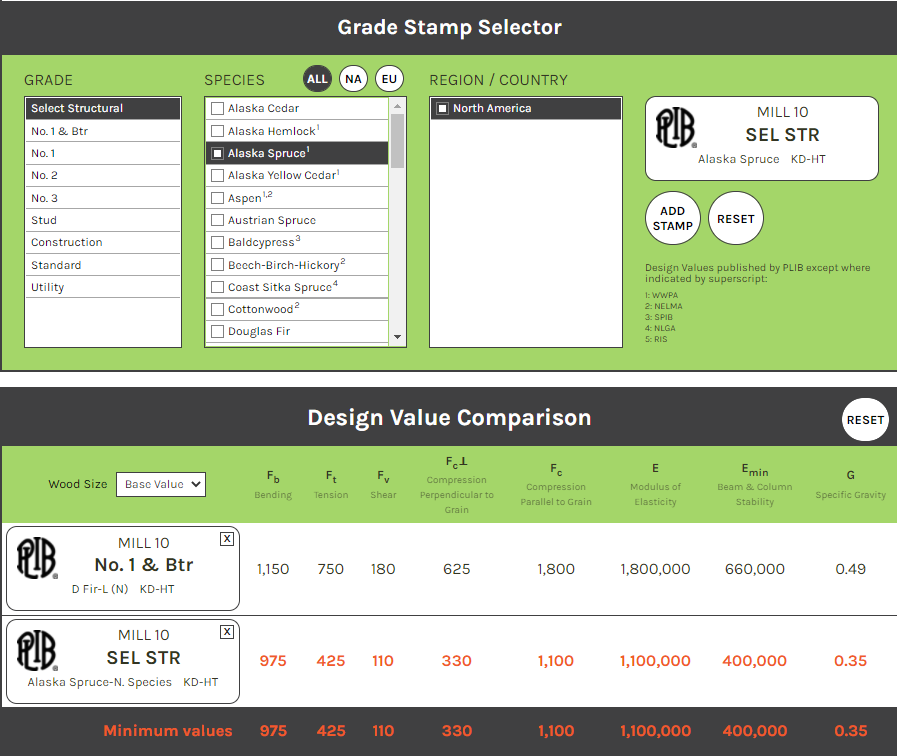 PLIB’s Design Value Comparison Calculator, the first of its kind, allows users to determine the applicable design values for an unlimited set of species combinations, an invaluable tool in today’s market, where multiple species are often delivered to jobsites.

“The issue of having multiple species delivered to jobsites is not new,” explained PLIB president Jeff Fantozzi, “but with the increased use of imported lumber in recent years, we’ve been getting more and more calls for help from code officials, job superintendents and engineers attempting to determine the applicable design values for species and species groupings they hadn’t encountered before.”

In 2021, challenges created by the issue of having multiple species on jobsites surfaced in the State of North Carolina resulting in disruptions on construction sites and at distribution yards. The complexity of determining common design values for a wide variety of species combinations made using mixed species difficult for end users and code officials alike. The need for more user-friendly design aids was readily apparent.

“We developed the Design Value Comparison Calculator in response to this issue specifically,” Fantozzi stated.

With the tool, users can enter any number of grade/species/region combinations they see on grade stamps to generate a table showing design values and specific gravity values for each individual grouping, while also highlighting the values that are applicable to the group as a whole. According to Henry Morris, Director of Engineering for PLIB, “The tool saves wood designers, lumber brokers and code officials hours – time they previously spent having to mine data from spreadsheets or printed tables. It vastly simplifies the use of virtually any structural lumber one might encounter in North American markets.”

PLIB’s new Span Options Calculator allows users for the first time to generate a set of lumber size options capable of achieving spans based on user-entered design criteria and species information. A new Max Span Calculator provides the maximum span length, along with bending strength, shear strength and bearing strength values, for any combination of grade and species or species group based on user-entered design criteria. Both span calculators derive from the identical data set used in the Design Value Comparison calculator.

The calculators include data for virtually any softwood lumber species one might find in use in North America, along with a wide range of hardwood species that could potentially be used in structural applications. The vast set of species choices, along with the ability to compare multiple combinations of options, makes these digital wood design calculators the first of their kind and extremely useful tools for wood users.

The calculators can be found on both the desktop and mobile versions of the PLIB website at www.plib.org/resources/calculators. They are publicly accessible and there is no charge for their use.

“PLIB is committed to supporting continued and expanded use of lumber in both residential and commercial construction,” Fantozzi said, “Developing these calculators and making them easily accessible by anyone clearly helps meet that commitment.”