There is no chance that 2008 will be a good year for the solid wood products sector. Sorry, that’s just the way it is. With that off my chest, here’s a brief look at what to expect in 2008 and beyond. Much of this information and perspective has been mined from the news & views section of our live website –  www.canadianforestries.ca – so for more
detail and regular updates, bookmark it today. 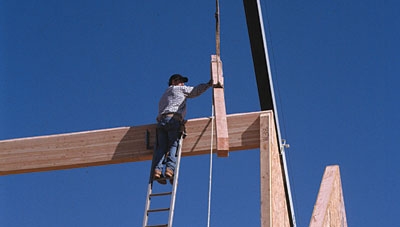 There is no chance that 2008 will be a good year for the solid wood products sector. Sorry

Short-Term Pain
Did you enjoy 2007? Then you won’t like 2008 much either. Although most forecasters predict the year will see the anticipated turn-around, it’s not likely to happen until later in the year, a moving target that seems to continually fade into the horizon. The National Association of Home Builders (NAHB), for instance, is among the most optimistic of industry-watchers, but shortly after the New Year again pushed the forecasted recovery further into the future.

“While 2008 looks to be a down year in total,” says NAHB chief economist David Seiders, “we expect key turning points to occur.” Ah, but the question is when, as up until late fall the NAHB expected home sales to begin turning around in Q1 2008, and housing starts in Q2. That is no longer the case.

“We’re looking for home sales to turn upward before mid 2008, on a national average basis, and we expect recoveries in housing starts and construction spending to commence before the end of the year,” concluded Seiders towards the middle of January.

So 2008 as a whole will be slower even than 2007 in terms of housing starts, as well as solid wood products demand. Given the heightened discipline among wood producers in late 2007 and early 2008, one can only hope that supply, and thus pricing, will be better managed.

Forecasts vary, but there is consensus on this downward trend for at least the first half of 2008. Seiders is calling for a 20% drop in total housing starts from 2007’s already depressed levels, themselves a 25% drop from 2006 he notes. Given the 1.80 million starts in 2006, that means 2007 saw just 1.35 million starts, and 2008 will see just 1.09 million. Others, like the National Association of Realtors (NAR) and Moody’s Economy concur, while some, like Widman’s Market Watch in Vancouver are more optimistic, calling for only a 9% drop to 1.225 million. Forecasters at RISI are calling for 1.2 million starts in 08.

In all cases, however, the worst pain is expected during the first half of the year, so that if you make it to the fall, things will start looking up. Not way up, though, as forecasts for 2009 are as low as 1.10 million (although this is from the NAR, and realtors trying to sell homes today have a stake in predicting lower starts tomorrow). Most see a slow but steady climb starting late in 2008.
“We think the market will bottom in the third quarter, and improve through 09,” predicts Paul Jannke, RISI’s senior vice president of wood and timber information. “Having said that, we think 09-10 will still be weak by historic standards, and are forecasting 1.2 million units in 08, and 1.62 in 09.”

I know a lot of wood producers that’d be tickled with a return to 1.62 million units in 2009, so keep your fingers crossed that RISI’s got its numbers right. Jannke says this 09 recovery is based on improving affordability, building pent-up demand, and an easing credit crunch.

In the meantime, don’t look for too much help from other major markets, like Japan and Europe. These may have been good and great respectively earlier in 2007, but have since been flooded by wood products diverted from the ailing US market.

Long-Term Gains
Once we’re all safely in 2009, what we can expect depends on whom you talk to. Still, the long-term fundamentals are very sound for solid wood products in particular, and even forest products in general.

Solid Wood: As reported last year on  www.canadianwoodproducts.ca, Harvard University’s Joint Centre for Housing Studies predicts a sustainable underlying demand for 19.5 million homes for the 2005 to 2014 period, or an annual average of 1.95 million. Despite the over-supply from 2005-2006, that will still likely mean an average of 1.82 million new homes built in the US between now and 2014, numbers well above the average of the boom years between 1993 and 2003. 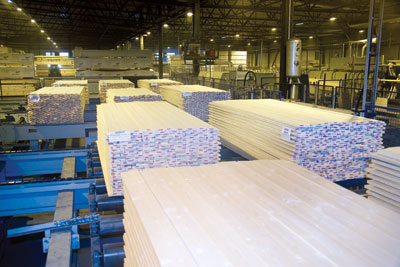 I know what you’re thinking, but the analysts say these are conservative projections, citing factors like household growth rates, net immigration, demands for second homes by boomers, and the replacement of 3.3 million homes through natural aging (not counting any natural disasters).

We are almost a quarter of the way through the study period, and this year’s expected 1.09 million starts is far from 1.82 million, but the authors insist it is just a matter of timing and working through the excess housing inventory before natural demand wins out. “Do not mistake short-term reactions to the housing slowdown as a harbinger of things to come. On the strength of demographically driven demand, the market will bounce back.”

Pulp & Paper: A recent study from the US-based AF&PA shows that while both global and US pulp wood demand and harvesting continues to grow at a steady rate, there are concerns. Wood for Paper: Fiber Sourcing in the Global Pulp & Paper Industry is a 100-page study that among other things traces the growing demand and harvesting of roundwood from 1993 to 2004, despite marked increases in recycled paper use. Global wood fibre consumption for pulp & paper increased 18%, or a whopping 111 million cubic metres from 1993 to 2004. While consumption fell 2% in the US, it actually grew by 9% in Canada, not bad at all given doomsday scenarios portrayed by analysts back in the last recession (1990-91). Still, it’s no surprise that the biggest growth areas for wood pulp consumption were China (304%), Chile (122%), and Indonesia (154%), and that the increased demand was met mostly by plantation wood. Still, none of this points to a collapse of Canadian markets for sawmill residues or pulpwood, and in the meantime, we always have…

Bioenergy: Yes, it’s complex, and issues like tenure, power rates, finance, and fibre cost need to be resolved before this sector takes off. Still, consider that not long ago an oil price of $45 a barrel was considered the threshold for a viable bioenergy sector. Last year oil averaged over $72 per barrel, and energy analysts are predicting an average price in 2008 of almost $78. Also consider that last year the same analysts underestimated the average price by a full $10, and you realize that with or without forest industry leadership, this market will make serious headway in the coming few years. If you’re looking for a budget number, CIBC World Markets released a report in mid-January predicting that a $150 barrel will be the norm by 2012. So too will $1.50/litre gas, which should also cause you to seriously review your company harvesting and logistics.

In all, for those who can adapt to the changing industry, or better yet can drive those changes, there is opportunity down the road. The last word I’ll leave to Craig McManus, who at the time he spoke these words was vice president, forestry & wood products with E.B. Eddy Forest Products in Ontario.

“We are undergoing a major restructuring, not the cyclical downturns of the past. We are being confronted with new global competition. Our abundant natural resources are no longer sufficient to guarantee continued prosperity. We must compete more aggressively. We must readily adopt new technologies and markets…to help us find the way ahead.”

The year was 1992, and Craig said this in what was only the second issue of Canadian Wood Products Magazine, CFI Magazine’s sister publication. Neither he nor I knew at the time that the industry was about to launch itself toward 13 years of uninterrupted prosperity. In short, we’re not the first to go through a deep industry recession. Nor should we underestimate the American demand for wood, and our industry’s ability to recover.

Related
A Change is in the Air
CWF Spring Meeting a Success
Are We There Yet?
It’s Not Over ’til It’s Over