In the end, efforts to improve logging efficiency, environmental performance and wood quality, and reduce fibre costs all come down to one guy – The logging contractor. Weakest link or strongest common denominator; however you look at it, this is where wood meets saw, track meets dirt, and money is often made or lost these days. Given that, it’s surprising how little attention is given to this key production centre – the logger as businessman, innovator, operator, maintenance manager, bookkeeper, and 100 other things.

That may be changing. Quebec’s PREfoRT is a unique partnership of academia, industry, research, machine suppliers, finance, accounting professionals and more looking at ways to secure a strong professional contractor base now, and in the years to come. It has a number of projects on the go, but one of its launch points is a survey done last fall of over 1,500 Quebec contractors. Almost 700 replied to the 81-question epic questionnaire, giving a valuable snapshot of how our contractors are doing, what they need, and what they can do without. CFI editor Scott Jamieson sat down with longtime contractor researcher and PREfoRT co-founder Luc LeBel at the Third Forest Engineering Conference at Mont Treblant, QC, this past
October to discuss the results, and what they mean for PREfoRT and the industry as a whole.

CFI Magazine: What’s the goal behind PREfoRT; what makes it unique?

Luc: It’s to get a 360 degree view of the contractor, including all the people and relationships around them – the forest company, finance sector, accountants, insurance, training schools, machinery suppliers and dealers, family, larger contractors, etc…That’s why we have one partner in each of these sectors, who each made a substantial financial contribution to belong. We want to help make the contractor more efficient, and to improve his business, but what makes us unique is this wider view to really trying to help the contractor succeed as a business, and to make sure the right climate exists for the next generation of loggers to succeed. Despite the fact that the contractor is the core of our entire forestry production unit, we really understand very little of how this business model works. That’s why the project goes beyond forestry and involves two colleagues from the business school at Laval University, for example.

CFI Magazine: You’ve spent much of your career looking at how loggers are organized and work. Why a survey now?
Luc: It’s just a first step. We have 11 major projects in PREfoRT touching on all major areas of the contractor’s business, but they all need to understand exactly what the contractor is, what he does, and what the main hurdles are to doing better before they can, or even should proceed. Also, it’s fine for people like you or I to think we know a lot about the contractor and his business – we spend a lot of time talking to them, learning about them. But that’s anecdotal. If you want to convince business or government to invest in the future of this production centre, you’d better have hard data. We do.

CFI Magazine: Did any of the results surprise you?

Luc: Many, starting with how many loggers took the time to respond to a 1.5 hour survey, and even to add extra comments. Sometimes the surprises are just a question of degree – I knew loggers liked what they did, but the level of satisfaction was truly astounding. That passion is something I think we need to have a lot more respect for. It must be a powerful force in the industry’s success, and it would be a shame to lose it. Other times the data drew attention to aspects of the business we don’t often think of. We asked loggers to break down how much time they spent in their main business functions – operating, mechanical, administration, analyzing the business – and then correlated that with profitability. It seems the more profitable ones spend more time analyzing the business.

Then there are the things we intuitively know, but the results make clear how important they are. For example, 57% said their spouse was the main bookkeeper and probably more. But how do we interact with this key partner? By arranging whale watching tours or shopping days – so-called spouse tours – at industry events. In fact,  when trying to promote the value of MultiDATs or other productivity tracking systems, these are the people we need to reach. Also, 75% said they were too busy to get involved in community activities, and it’s no wonder. But then we lose a valuable asset in public relations, and for recruiting the next generation.

Then there are small things, like 75% having access to the Internet, and accessing it two or more times per week. This is a possible training tool, and I think we often assume they don’t use it.

Finally, we need to be more flexible in our approach. Yes, 50% of the contractor force is over 50 years old. But a full 30% is under 45. We spend so much time worrying about the older workforce vanishing that we don’t focus on that 30%, who may expand to take more volume if we need them to, who will have a different type of business to run, and who will perhaps be more open to different training options.

CFI Magazine: Why do you think the response was so high?

Luc: Because someone asked. More than most other regions, loggers in Quebec are isolated and uninvolved in associations. They have issues and concerns, but nowhere to raise them. We asked, and many were only waiting for the opportunity.

Luc: Plenty, which is why it’s great to have the varied partners on board, including now FERIC. We have the expertise to respond. There were many areas where in each case over 25% said they’d like more training, and there is little or nothing available now. Examples vary from planning a harvesting site, a dying art among many, to training on new machinery and technology (a high need). And we also learned that it’s not just loggers that need training, although that’s often the focus. For example, most modern CTL machines have the computer tools to track uptime and analyze non-productive time. But many loggers don’t know why or how to use it. The thing is, neither do their equipment dealers. We have to close that loop.

CFI Magazine: As far as the next crop of contractors, how are we doing?

Luc: That’s another surprise: Not as bad as I would have thought, at least not in Quebec. For starters, there are those 30% under the age of 45. There are opportunities to expand those operations to handle more volume if required (assuming the operators are available). Also, we know that 36% have identified someone to take over, whether family or operators. That’s another large component for the future, but we need to do more to make sure the hand-off takes place. In the past, we went from a large number of manual crews, to a smaller number of semi-mechanical crews, and then finally an even smaller number of fully mechanical contractors, all the while selecting from within that group as we went. We will not be able to manage the next group of contractors with that same rate of attrition.

CFI Magazine: What are some key things we need to start doing to make sure the next wave of loggers arrives on time, and succeeds?

Luc: Here’s where the survey helps again. Take the two groups above. First, the 30% who are below 45 years old. They may indeed take on more volume, assuming the operators are available, but then their businesses will change from owner/operator, to more entrepreneur and business manager. That will require some different talents and knowledge, different management styles, more business analysis, different finance structures. We need to find ways to deliver that. For the second group, we need to make sure the current owner has the tools and support he needs to continue to succeed and grow, and that we do the most with our partners to reduce hurdles in finance, insurance, mechanical skills, etc… for the next generation to take over. And so that’s where many of the PREfoRT projects will focus. It would also help if the industry wasn’t always talking doom and gloom, but that’s another matter…

The PREfoRT survey paints a picture of the “average” Quebec logger. If such a figure exists, he’s likely not much different from your average logger elsewhere in Canada, with the exception of scale. With the rapid move to cut-to-length (CTL) logging in the past 15 years in much of Quebec, volumes and employee numbers have shrunk
to reflect loggers in the Maritimes more so than Ontario or Western Canada.

•    Motivation: They’re not in it for the money, although a surprisingly high percentage (48%) say that the pay is a factor. They don’t do it out of lack of alternatives, as just 20% say they had few other options. Rather, 96% say they like the work – 99% because they like to be challenged and to use all their skills; 91% because they like to work in teams; 88% because it’s stimulating; and 83% because they like the independence. When asked for details, they are likely to say they just like everything about logging! Looking at these numbers, I’d be very careful creating a cost-tracking and reduction system that involves much micro-management.

•    The future: Most (67%) had help from family in getting started, but over 60% would discourage their own family from getting into the business. This points to some recent declining prospects in the industry, or at least the perception that things aren’t as rosy as they once were.

…and the survey says…

Half the battle with surveys is how you ask your questions and to whom. The other half is interpretation. For the first, the folks at PREfoRT did their best to gain a representative sample, obtaining a response rate of 28% despite the daunting 81 questions. For the latter, Luc and company are the right people to give answers careful analysis, and to report them in the right context. Here are some of the results from over 700 respondents:

•    The good news? They have an average of 27 years’ experience, some 18 of which as owners, so they know what they’re doing.

•    The bad news? There’s no guarantee that this knowledge will be passed on to the next crop of loggers. With 37% saying they’ll be leaving the business inside of five years, that’s an issue.
•    More good news? Over one-third have identified someone to take over.

•    More bad news? That succession is far from guaranteed, as loggers also identified many substantial hurdles, including an uncertain future for the industry (97%), difficulty in finding finance (93%), working conditions (85%), separation from family (85%), and difficulty in recruiting qualified operators (83%). Many of these are different sides to the same coin.

•    And to end on some good news – Quebec’s contractors are more satisfied than most would have guessed. For example, a whopping 99% were satisfied or very satisfied with their employees and partners, 97% with their bookkeepers/accountants, 93% with their machinery suppliers, and 88% with their insurers. This starts to fall when you ask about their mills (a relatively low 82%), although they are more impressed with the people they deal with more regularly, like foremen (92%) and superintendents (88%). They are much less satisfied with the MNR (59%) and union delegates (67%). To my mind, these high approval ratings reflect a do-it-yourself attitude and low expectations for outside help as much as anything else. Basically, just stay out of their way, and these folks will thank you.

To find out more about PREfoRT and its many projects and partners, which include NSERC, SSHRC, and the Canadian Forest Service, visit www.prefort.­ulaval.ca. 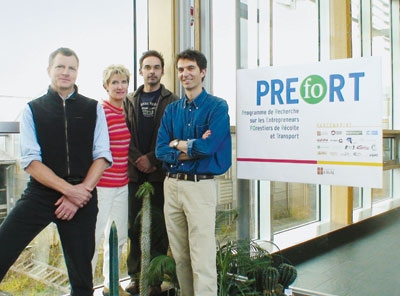 Part of the PREfoRT team from University of Laval (from left): Andrew Egan (now with Paul Smith’s College in New York State) In the end
Print this page