On April 15 of this year, B.C.’s minister of Forests issued a press release predicting that the province might be in for another scorching summer on the heels of 2009, which was the worst fire season on record. The statement came four days after the provincial government announced it would eliminate 204 permanent positions from the Ministry of Forests and Range as part of the ongoing downsizing of the provincial civil service. 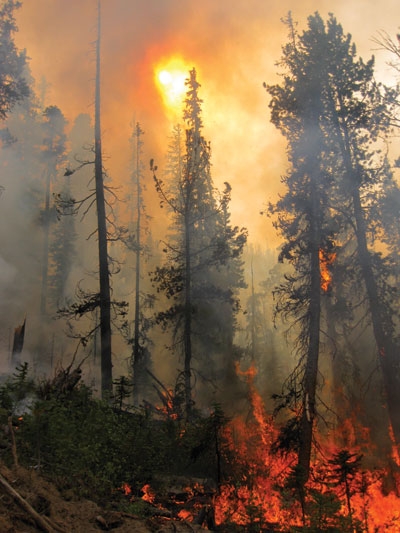 On April 15 of this year

2009 surpassed 2003 as the worst fire season in B.C.’s recorded history, with more than 3,000 fires devouring 257,000 hectares, or about 40% of the total Canadian land base affected by wildfires. Fortunately, other jurisdictions in Canada experienced relatively few significant wildfires last year, leaving personnel, equipment and aircraft available to be deployed to B.C. by the Canadian Interagency Forest Fire Centre (CIFFC). 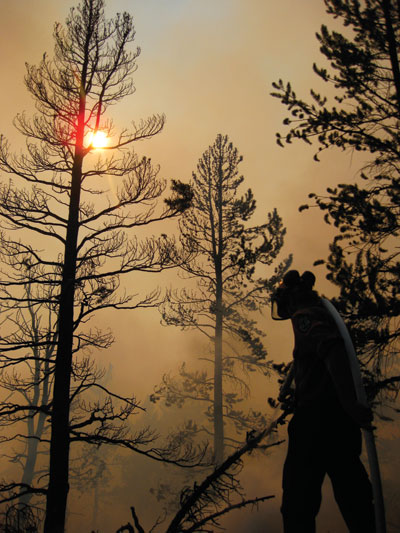 B.C. employs around 1,100 seasonal wildland firefighters. Last summer, 2,500 Class 1 firefighters were brought in from across Canada and from as far away as Australia and New Zealand under the auspices of the CIFFC, plus another 1,200 contracted personnel worked to control the fires. At the peak of the 2009 fire season in B.C., there were 251 helicopters actively engaged in firefighting, along with 42 aerial tankers and water bombers, which dropped 19.6 millions litres of retardant. More than $400 million was spent controlling B.C.’s wildland fires in 2009; the province had budgeted $60 million. The single day record for new fire starts was 154 on Aug. 1, and at one point 792 separate fires burned simultaneously.

Interviewed separately, Brian Simpson, director of B.C.’s Wildfire Management Branch, and Kelowna fire chief Rene Blanleil, could have been reading from the same script when recounting the lessons learned from 2003, the changes that have been made and what the road ahead may look like.

Co-operation among local governments and agencies was markedly better in 2009 because, as Simpson puts it, “everyone knows their role and pulls on the rope in the same direction.”
From Blanleil’s perspective, a good example of effective unified command was the mid-July 2009 Glenrosa fire on the west side of Okanagan Lake, during which fire chief Wayne Schnitzler of West Kelowna quickly took charge of the response to a fast-moving blaze that threatened thousands of homes. About 10,000 people were evacuated in the first 24 hours while municipal firefighters were joined almost immediately by the first provincial firefighters and aircraft.

Communication has improved in many ways. From the fire line through tactical command to the regional and provincial level, information flow has greatly improved decision-making capabilities. Also, providing accurate information to the media in a timely fashion during the 2009 fires resulted in more complete and positive reporting of events than in 2003, and this contributed to improved public understanding and stronger support.

In 2003, the 25,000-hectare Okanagan Mountain fire that threatened Kelowna created the groundswell reaction that resulted in the Filmon Review, which generated a report focused on providing more firefighters, more equipment, and better planning, communications and prevention when it comes to wildfires. In 2003, there was poor communication at all levels, partly because the existing lines of communication were simply overwhelmed, but also because there was no comprehensive communication strategy, internally or externally. A lack of even the concept of unified command left locals feeling slighted when the provincial forces suddenly announced that they were in charge. There was an influx of structural firefighters and apparatus from across the province, much of it self-initiated, putting people who were neither trained nor properly equipped directly in harm’s way. The province has embraced the Filmon Review and this has led to a significant change in philosophy, says Simpson.

“Prior to 2005, wildland firefighting in B.C. was simply a response,” he says. “Now we have shifted our focus from protecting forest values to protecting communities through fuel management programs and community wildfire plans. Fire management around communities is critical.”

Modified response means that fires in remote areas that do not threaten human life or structures are allowed to burn in order to maximize resources where needed. In 2009 in B.C. there were 338 modified response fires.

B.C. now has a co-ordinated fuel management program. Fuel management is the process of changing forest fuels to reduce aggressive fire behaviour. This can include thinning, spacing and pruning trees, and the removal of needles and woody debris on the forest floor. This reduces fuel load and the potential for devastating wildfires. Money is made available to municipalities and regional districts in the form of matching grants administered by the Union of B.C. Municipalities (UBCM). The City of Kelowna had initiated its own fuel management program in city parks in 1998 and has aggressively upgraded its program since 2003. Chief Blanleil says that while his department and the City of Kelowna put a lot of energy into the program, along with public education, there is still a problem with property owners who are unable or unwilling to undertake the work on private property. 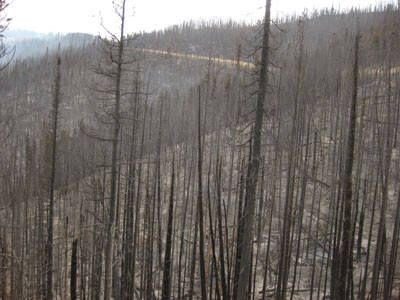 Sometimes the process of disposing of the accumulated dead trees, downed branches and needles can be just as risky as leaving this material on the  ground. Piling up the fuel and burning it is the only way to reduce the hazard, but after a warm, dry winter the burning season can be very short. West Kelowna cancelled 95 burning permits in early March of this year after two slash fires got away from the property owners and spread to surrounding brush. A quick response by West Kelowna Fire Rescue brought the fires under control before there was any significant damage. Across the lake in Kelowna, Chief Blanleil decided not to cancel the 100 permits that his department had issued.

Snowpack across B.C. was at below average levels this spring, though a late dump of snow across much of the province in the weeks after the February Olympics did improve the situation. But snowpack is just part of the equation. Chief Blanleil says, “the situation is really dependent on the amount of precipitation the region receives through May and June and then how hot it gets through the summer.”

Another factor is timing. “We were fortunate in 2009”, says Blanleil, “as the big fires were early in the season, which meant that provincial resources were available. In 2003, the large fires in and around Kelowna were later in the summer and there had already been a number of significant fires in the province. Resources were stretched thin and people were worn out.”

Community Structure Protection Units (SPU) are credited with saving hundreds of buildings during the 2009 wildfire season. The UBCM owns three units that are strategically placed around the province and jointly managed under a Memorandum of Understanding (MOU) with the Office of the Fire Commissioner and the Ministry of Forests. These structure protection units are designed to minimize damage from interface fires. Each trailer contains 350 sprinklers, which is enough to protect 30 to 50 homes. The units are deployed during an interface fire to dampen roofs and areas around structures to help prevent sparks and embers from igniting fires. Many communities and fire departments have created their own SPUs.

Pine beetles and human issues
The mountain pine beetle infestation has had a huge impact on wildfire behaviour. Currently the B.C. government estimates 16.3 million hectares are affected by the beetle and include dead or dying trees. Dead trees burn easily and support the rapid spread of fire. They do not retain water in the ground, with the result that ground cover dries out quickly and acts as ladder fuels that support combustion.

A large part of the problem is the number of fires caused by humans, whether deliberate acts of arson, careless smokers and campers ignoring open fire bans, or what David Letterman frequently refers to on his late night talk show as, “true acts of human stupidity.” In July 2009, a homeowner in West Vancouver, concerned that the noise of a chainsaw would disturb his neighbours, decided instead to burn out a stump behind his multimillion-dollar home. Oblivious to the tinder dry conditions and the total fire ban in effect in the community, he doused the stump in gasoline and tossed a match. Flames exploded through the tinder dry underbrush and the resulting smoke screen created mayhem on the nearby Trans-Canada highway. While no buildings were damaged, West Vancouver firefighters were hard pressed to control the blaze that consumed several hectares of brush. 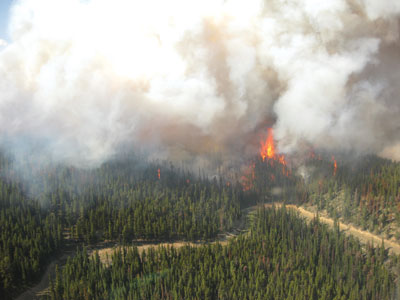 Part of the April 15th press release from B.C.’s minister of Forests was a warning that tickets would be issued to those ignoring fire closures in parks and on Crown land. What the minister didn’t mention was that in addition to his ministry eliminating 204 staff positions this year, more than 50 provincial park rangers, who would ordinarily be out patrolling the back country during the peak summer season, were eliminated last year. The number of conservation officers in the province has also been reduced by half over the past decade.

Global warming, climate change – call it what you will. Shirtsleeve weather in Vancouver during the Olympics might look good to the tourist board, but it’s really not what the province needed. This past winter was the warmest and driest on record from coast to coast. Before spring had sprung there were fires burning in the Maritimes, Ontario and Alberta. Forest fire resources in this country are designed around the concept that at times of peak need, resources will be available from other regions, as happened to B.C.’s benefit in 2009. What happens when those resources are not available for deployment? As we rapidly approach the tipping point, only time will tell.

Paul Dixon is a freelance writer based near Vancouver, B.C. He originally wrote this article for Fire Fighting in Canada.