June 16, 2013 - Twenty years ago, Wade Elliot thought he was done with the logging industry. He had started logging when he was 18, and owned his own company in his 20s. But children were on the way, and it was time to find a different career to support his new family.

After a brief hiatus from the industry, Wade came back, thanks to a nudge from some close friends.

“Rob Sunderman and Kelvin Arndt originally called me to ask about investing in the grocery store in Clearwater, but the conversation continued into logging,” said Elliot.

After two years in the grocery business, Elliot, Arndt and Sunderman purchased Cleavely Logging, which was the largest logging contractor in Clearwater, B.C., at the time with the highest senority at Slocan. Two years later they bought out Colbourne Logging as well. With the two companies combined, and staff in place, M.W. Sharke Contracting Ltd. was born, with day-to-day operations run by Elliot.

Cutting for Canfor
M.W. Sharke continued the work of the contractors it had purchased, supplying wood for the nearby Slocan and later Canfor Vavenby sawmill, located just 25 kilometres east of Clearwater.  Canfor’s designated area in that region stretches north towards Valemount, east to the Adams Lake area, and near Clearwater on the south/west end. Those stands include a mix of pine, spruce and fir. There is also a small amount of cedar mixed into the stands, which is sold to the cedar mill in Barriere,  located approximately 60 kilometres south of Clearwater.

The downturn in global lumber demand just a few years later put M.W. Sharke on shaky ground, but the company was still able to cut for the Vavenby mill based on the contracts it had acquired. That all changed in 2009, when in May, Canfor closed the mill in Vavenby, along with the Radium and Rustad sawmills. That caused Sharke to look for private wood to log and sell to other mills. During this time it was forced to sell some of its equipment in order to make ends meet.

In 2011, Elliot and his team were prepared to shut down their logging operation. Then, seemingly out of nowhere, Canfor announced its plan to reopen the Vavenby site.

“We were close to selling out,” said Elliot. “But then the mill decided to run again, and they wanted guys like us to get bigger.”

The Canfor Vavenby sawmill restarted on Sept. 6, 2011. The revamped operation included a $24-million capital investment, with several new pieces of equipment purchased including a new grade optimizer in the planer, a new canter line and an upgraded planer feed system. At full production, the upgraded mill was set to produce 240 million board feet of SPF annually.

An equipment crisis
M.W. Sharke renewed the five-year contract, which constitutes 33% of Canfor’s annual cut. The reopened Canfor sawmill topped up Sharke’s cut to 300,000 cubic metres. That would mean having to ramp up their operations, something that Canfor was expecting from the contractor.

Just a few months after being on the brink of shutting down, Sharke found itself in need of significant amounts of new equipment to meet the annual cut requirements of its new contract.

“Most equipment dealers didn’t want to touch us,” said Elliot. “We needed equipment immediately, but we didn’t have the capital to make such a large purchase.”

Elliot had to rely on his friendship with Woodland Equipment president George Anderson. Elliot contacted George in Kamloops and told him of his predicament.

“George said to just let him know what we needed, and we proceeded to get five machines from him,” said Elliot.
Woodland Equipment sells Hyundai forestry equipment, as well as Peterson, Bruks and Rubble Master machinery, and had the deck-in loaders, processors and excavator that Elliot and his crew needed in order to ramp up their operation immediately.

“George has been great for parts and service,” said Elliot. “He is always going the extra mile for us. He would take parts off of equipment in the yard to cut down on parts replacement time.”

Building strong relationships with local suppliers has been key to Sharke’s success since the Vavenby mill reopened two years ago. In addition to the strong relationship Elliot has continued to build with Anderson, he has also worked closely with the team at Inland Kenworth Parker Pacific’s Kamloops branch. Branch manager Tom Connatty and his team have provided Elliot with sales, parts and servicing of all types of Tigercat equipment, and recently sold Elliot a Case 330 rock truck for building logging roads.

The terrain that Sharke cuts for Canfor includes some steep slopes, which has caused Elliot to re-evaluate his company’s equipment. In order to tackle the terrain, he has to consider bringing in new machinery. The latest piece under consideration is a six-wheel skidder.

Elliot began looking into the Tigercat 635D six-wheel skidder to fill his need. He got in touch with Connatty, and that discussion led to a trip east to Ontario to visit the Tigercat production facilities to see the 635D first-hand. As a result, Elliot is bringing in the skidder to test on its job site.

The job site located northeast of the Canfor Vavenby sawmill is one of three active sites currently being worked by the M.W. Sharke crew. Working slopes of up to 35 degrees, the crew is using three Hitachi crawler excavators to tackle the site, two 210LC-9 decking machines and a 250LC-9LL road builder. The 250 is equipped with a Rotobec grapple to load the logging trucks, while the 210s are equipped with Waratah HTH 622D processing heads. The job site has three skidders – Tigercat 630, John Deere 748H and Cat 535 – which feed the two decking machines that separate and stack the logs for the processors.

On the other side of the Thompson River valley from the Vavenby site is another of Sharke’s active sites, through the mountains on the west side of British Columbia’s Highway 5 north of Clearwater. On that site, two Hyundai 210 LC7s with Imac grapples stack the logs that the three skidders forward to the road. Bunching is handled by two Tigercat bunchers with Tigercat 5702 felling heads. This crew has its own challenge in working the site, facing incredibly uneven ground that still has not completely thawed out from the snowy winter.

Terrain causes uneven ground
The terrain not only makes it difficult for Sharke’s machinery to navigate, but also causes uneven ground when it comes to competing on price point. Much of the land that Sharke’s team is cutting contains broken-up ground and rock. Those circumstances add extra costs to the operation: costs they are hoping to find a way to recover.

“We have a difficulty with the rates for our wood,” said Elliot. “The rates that are paid are based on operations working on easier ground.”

A few contractors that have come from outside the region quickly left because of issues with the terrain. In some parts of northern B.C., the land is flat for cutting so the wood rates in the south look appealing even with the increased transportation and lodging costs.

“We had a contractor come here from Prince George not long ago,” explained Elliot. “The contractor was to cut two blocks of wood. He ended up cutting half of one and left because of the terrain.”

Thankfully for Elliot, the management at Canfor has been sympathetic to the company’s concerns, and has agreed to meet with the Sharke ownership team to discuss the issue further.

But the terrain is not the only issue that has been a cause for concern. Trucking has become a major issue, with not enough trucks in the area. Elliot and his team have considered buying their own logging trucks but Canfor’s Trucker’s Union is for owner/operators, which prevents contractors from owning their own trucks.

“In winter it’s an even bigger problem,” explains Elliot. “There are not enough operators in the winter (willing to navigate the logging roads) for the expected haul.”

One of the bigger challenges for many logging companies is a position of strength for Sharke: the age of the staff. There are several seasoned veterans on the 16- to 18-person crew, but the team also features several young operators, including Elliot’s two sons, Kyle, 24, and Darcy, 22. That has created a strong mentoring program within the crew, with the veterans teaching the younger crew about the terrain, troubleshooting on equipment, and working with diverse weather and land conditions. Safety is a very high priority which is led by Elliot’s lead hand Rick Dekelver. The company has logged accident free other than minor incidents since beginning the operation in 1996. Another key to Sharke’s success is having operators trained on several pieces of equipment so they can be utilized in the most efficient way.

Both the physical and business landscape of the region could face a major change in the coming years. A permit for a copper, gold and silver mine has been filed for an area of land just north of Clearwater. Should the mine receive approval, which is likely based on the quality of the copper deposit at that location, the introduction of the mine could cause the forest industry to take a hit as machine operators flock to the higher salaries provided in the mining industry.

For now, M.W. Sharke is just happy to be in business, working with a strong crew, supplying a revitalized sawmill in a region known for its thriving forest industry. 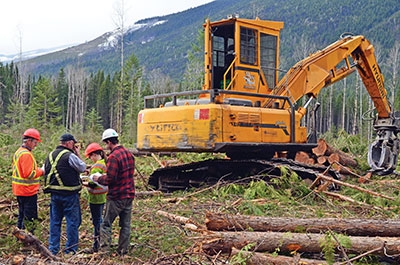 From left to right: Foreman Rick Dekelber Twenty years ago
Print this page