Feb. 2, 2015 - When George Lambert asked his clients about the future of the cable yarding industry in Canada several years ago, he was told that a solution would be necessary to address second growth on the steep slopes of coastal B.C.

Those discussions sparked several years of development that has led to the release of the first new “white-paper” cable yarder design launched in Canada in 25 years.

At the time, Lambert wasn’t necessarily thinking that a yarder was the solution to the issue. T-Mar Industries was developing hoe-chuckers, and his initial thought was that a ground-based solution would likely solve the issue. “But the more we got into it, the more we recognized that it was probably a new generation yarder that was going to be required.”

Lambert began working with Engineer Ed Hughes, who had joined the company from Madill where he was the head yarder designer. They began by asking clients what would be needed for the development of a new yarder. Some common themes quickly emerged: it had to move in one piece so weight and size restraints had to be factored in, safety issues had to be addressed, fuel efficiency was a must, and ease of operation had to be a factor as a new generation of yarder operators enters the logging industry. The yarder also needed to be able to haul multiple stems in a single turn.

Fast forward to the fall of 2013, when Lambert and Hughes successfully completed the preliminary design. By that time, the market for a second-growth cable yarder had emerged, so they moved forward with the construction of the prototype of the LC550.

Lambert contacted industry partners to assist in the development of the LC550.  They partnered with Caterpillar on the engine and transmission package, with Caterpillar completing extensive research to meet the specific needs outlined by contractors. The package settled on for the LC550 is the CAT C9 Acert 8.8 litre engine and Cat CX28 Powershift transmission (5 forward speeds), which provides the power, fuel efficiency and ease-of-operation demanded by yarder operators. T-Mar also teamed up with Parker on the hydraulics and control system for the LC550. Together they developed a version of the Parker ICan controller that includes programming and controls designed specifically by T-Mar for efficient operation.

The entire machine was designed in AutoDesk, a computer-controlled sotware system that allowed Lambert and his team to do full structural analysis of the machine during the design phase. That was especially important when factoring balance into the design, ensuring the machine had the right centre of gravity to stay secure in the steepest conditions.

One year later, in October of 2014, the first LC550 was completed. The yarder had already been pre-sold to a client who immediately put the LC550 to work in the forest on a small off the coast of Vancouver Island near Campbell River. The first few days included the typical rainy and muddy steep slope conditions often encountered by contractors working the coastal slopes. The wood diet being cut by the contractor is a second growth softwood mix of fir, hemlock, and cedar. Most of the stems are 100ft.-150ft. in length, and the yarder is successfully moving 3-5 stems per turn.

The yarder operator provided his assessment to Lambert after a few days in operation, complimenting the LC550’s balance, power, ease-of-operation and low noise.

Now that the first machine is working in the woods, Lambert already has other contractors lining up to see the LC550 in action. That includes both Canadian and U.S. customers throughout the Pacific coastal region.

So far, the results have been solid according to Lambert’s original expectations.

“We are still doing a little bit of fine-tuning to it, but it works really, really well. The engine has lots of torque and it shifts very well. It also has huge regen power in the winch, even better than what we originally expected.” 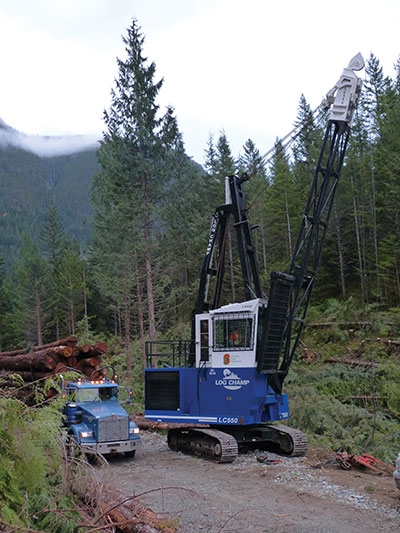 The yarder had already been pre-sold to a client who immediately put the LC550 to work in the forest on a small off the coast of Vancouver Island near Campbell River. When George Lambert asked his clients about the future of the cable yarding industry in Canada
Print this page