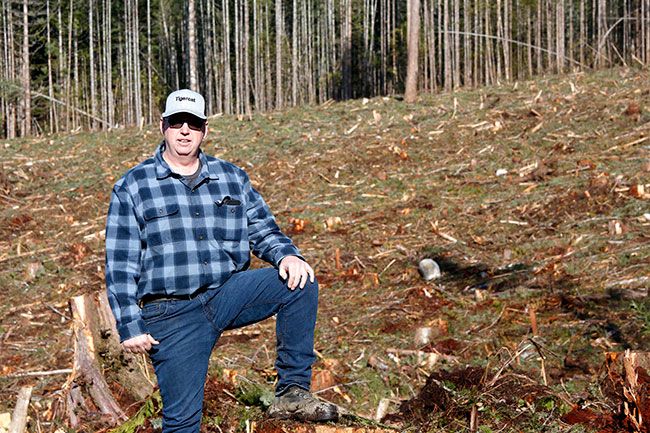 Rob Stewart stands in a Powell River cut block after his team have gone to work, grinding useful, clean fibre for hog fuel. They took about 68 truck loads of hog fuel out of the block, and left five metres of coarse, woody debris per hectare to keep the soil healthy. Photos courtesy Adam Kveton.

At 53 years old, Rob Stewart would tell you his career has been a grind.

But, as the landscape of B.C.’s forest industry changes, Stewart thinks that 13 years chipping away at a business a little before its time is about to pay off.

Stewart is the owner of Stewart Systems Inc., a mobile chipping and grinding company that goes into cut blocks and makes use of what would otherwise be waste wood, turning it into pulp-quality chips, hog fuel or bark mulch while leaving enough debris for the soil to remain healthy.

In addition to collecting the waste and chipping or grinding it in the bush, Stewart Systems also trucks it to the mills it works for.

It’s a wide-ranging business that’s seen Stewart and his employees pick up a lot of odd jobs to make it work, but he’s thinking that might be about to change.

Current state of affairs
Canadian Forest Industries magazine caught up with Stewart in Powell River, B.C. (before the COVID-19 pandemic), where he’s been working cut blocks in the municipality’s community forest, as well as in the nearby Tla’amin Nation’s tenure, among others, grinding hog fuel to send to Catalyst Paper’s local pulp mill (now part of Paper Excellence).

Previously all the local mill’s hog fuel came in on barges, but Stewart has helped to change that, and he also hopes to be making chips again once Paper Excellence works through its current stockpile of chips (a computer virus that took hold in February left the company with a serious backlog).

Stewart started up the business back in 2007 after working for his father-in-law, Andy Byrne.

But, in 2007, the Harmac pulp mill near Nanaimo, B.C., asked Stewart if he’d like to work under his own name and chip for them.

Stewart said yes, but still helped manage A. Byrne Forest Products. “But what happened was Harmac went bankrupt,” he explains.

It was certainly a tough time to start a business, and a rough year for Stewart, but he’s continued to keep his company and his crew of seven to 12 employees (depending on what work he’s got going) working, while suffering no illusions about the business he’s in.

“The margins are very small and the capital outlay is very large,” he says.

The business also works best when there’s buy-in from loggers and tenure-holders.

How it works
Ideally, the relationship between tenure holders and Stewart’s company is a symbiotic one: he gets paid by mills to provide chips and/or fuel, and he gets access to that material through deals with tenure holders to remove their waste. This means the tenure holders don’t have to burn the wood waste, and get a lower stumpage rate.

“Basically, I will take care of their mess and make it go away and offset my costs by what the mill pays me,” Stewart says.

But, like any logger, Stewart has to do the math on what cut blocks make economic sense for him to go after.

“I look at a block and, depending on the distance from the mill, I have to figure out whether I can make it and the amount of loads to offset my mob and demob – because for each block, you need to mob two to three pieces of equipment,” he says.

“So, it depends on volume, distance, market conditions, [and] whether the person with the wood is willing to supplement me in order for them to get rid of this, so they don’t have to burn.”

He also needs the co-operation of the logging company early on to make sure they create the right infrastructure for his equipment.

Often, to make the company viable, Stewart has had to pick up other jobs along the way, like deactivating the cut block or even clearing municipal land, splitting stumps and separating them into hog fuel, bark mulch and top soil, and more.

Another way he’s made it work is by picking up used equipment wherever he can. 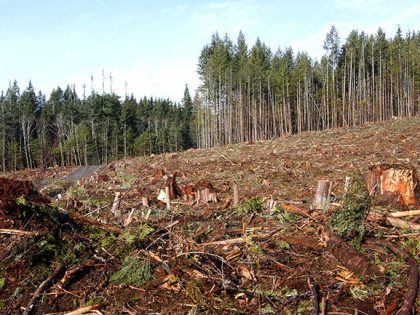 This Powell River cut block shows what the land looks like after Stewart and his team have gone to work, grinding useful, clean fibre for hog fuel.

Rob Stewart shows off his newest purchase – a Mack Pinnacle tractor pulling a 53-foot JBS live floor silage trailer. With its automatic tarp and door, the tractor-trailer has kept one of his employees happy enough to stay on with the company instead of heading into retirement. 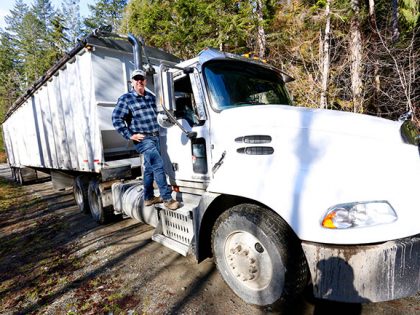 Rob Stewart shows off his newest purchase – a Mack Pinnacle tractor pulling a 53-foot JBS live floor silage trailer. With its automatic tarp and door, the tractor-trailer has kept one of his employees happy enough to stay on with the company instead of heading into retirement.

The fleet
Stewart got his chipper, for instance, out of a farmer’s field in Boring, Ore,, which he did because he already had a donor machine with the same component parts, he says.

“I brought it to Nanaimo, spent a month getting it up and going and was doing 10 to 15 loads a day for 15 months using those parts on the old beater,” he says with a grin.

For grinding, he’s running a Peterson 5410 horizontal feed track grinder and a Peterson 4400 horizontal feed grinder, one Tigercat 880 log loader with a WBM XPC 500 power clam grapple alongside a pair of Volvo 210B high-walker excavators, one with a CWS HX50 power clam grapple and the other with a Bodine stump splitter, which he bought at an auction for $5,000 and then upgraded to save costs.

It’s a challenge to turn around and can’t take steep grades without help, but its automatic tarp and door has been enough to keep one of Stewart’s most senior drivers working instead of going into retirement.

All this is in the hopes of reaching a tipping point in the industry.

Hope for change
Stewart says the day when his business really takes off may be on its way. Part of that is the B.C. government’s new policies aimed at making tenure holders take more fibre out of cut blocks, or pay a penalty.

While triple stumpage on waste fibre is a thorn in the side of many in the forest industry, Stewart’s business both benefits from tenure holders taking a more serious look at the fibre they’re leaving behind and provides a solution to the problem.

Seeing a reduction in slash-burning is part of what drives him, he says. Cleaner air, a reduction in carbon emissions and lower wildfire risk are all byproducts of making a high-quality product out of the fibre that’s often left behind.

“My hope is that burning is going to be a thing of the past, and people will start utilizing that fibre for pulp first prize, hog fuel second prize,” he explains.

To do that, his number-one ask is that mobile chipping and grinding operations like his be considered at the beginning stages of logging blocks so that the infrastructure he needs to haul from the bush is there.

Though Stewart has high hopes for the coming years, his definition for success is pretty simple – to do right by his family.

“I wouldn’t have got to where I am today if it weren’t for my father-in-law, Andy Byrne,” Stewart says. “He mentored me.”

“If I have a couple grinders, a couple chippers going, and I can pave the way for Torey, I’ll consider myself successful,” Stewart says.