Jan. 2, 2018 - Canadian Forest Industries Top 10 Under 40 contest is an annual tradition, drawing in nominations from coast-to-coast and recognizing young leaders in forestry. 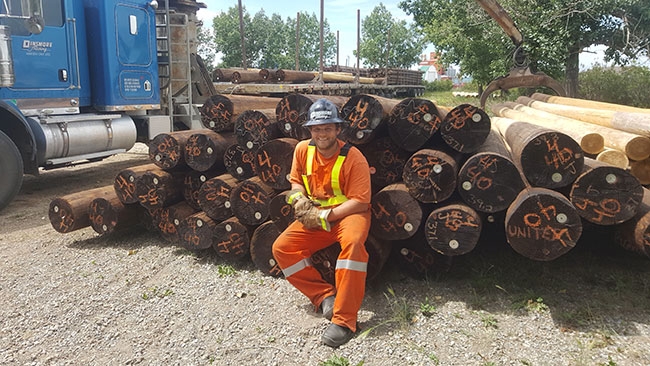 To individually acknowledge each winner and his or her contributions to the forest industry, CFI will feature each of our top 10 winners of 2017 over 10 weeks.

We’ll start off the New Year by introducing our readers to Sean Dinsmore.

Sean, 30, is vice-president at Dinsmore Trucking in Clarksburg, Ont., and Vulcan, Alta.

He received a whopping six nominations from co-workers, bosses, partners, and customers. Industry advocate, pioneer, innovative and hard working were words used by his nominators.

Sean followed in the footsteps of his father and is now the third generation behind a hydro pole and logging company. The company, Dinsmore Trucking, began in 1958 by Sean’s grandfather in Ontario.

Under Sean’s direction, the Clarksburg, Ont., company grew from a small family operation into a cross-Canada and U.S. heavyweight in the long wood industry, Bev Peart, Sean’s co-worker, explains. The company now includes a satellite office in Vulcan, Alta.

“Sean is still young, but a tremendous pioneer already. Though this company has grown, Sean still keeps the family values tight to his chest and still makes time to chat with all staff and their families, and is still known to take little ones for a truck ride,” Peart says.

“He has an innovative mind; particularly for ways of designing equipment to haul up to 130-foot trees in all Canadian jurisdictions from the bush, to the peeler, from the peeler to the treating plant, and from the plant to market,” Dinsmore’s Michael James explains.

Other nominations from customers and business partners extolled Sean’s excellent service, work ethic and honesty. “He will take the time to think of innovative ways to improve his service instead of accepting things are ‘always’ done a certain way,” Trans Canada Utility Pole Co.’s Richard O’Mara says.

Stay tuned for next week’s spotlight on Chris Kalesnikoff.

Related
Husby Forest Products passes forestry audit
The Home Depot strengthens forestry protection
‘We had to rebuild the trust’: How the BC Saw Filers Association got back on track
Sawmills in Quebec and Ontario are running at record high levels