Two years ago, Bill Bowie, owner of Dawson City, Yukon-based Arctic Inland Resources Ltd., had a difficult choice to make. After 33 years in the logging business, it was time to either pack it in or pick it up. 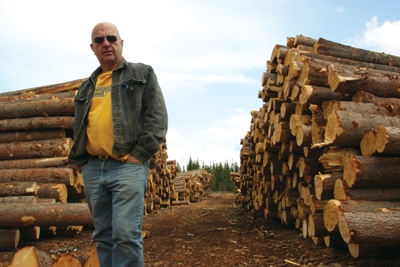 Bill Bowie with some Yukon timber. It’s a mix of large and small Two years ago

“The sawmill was wore out,” explains Bowie, 64, referring to the mill he assembled in 1975 partly from post-Klondike Gold Rush-era steel salvaged at the local dump. “The equipment was old and wore out. The people were old and wore out. Either we had to get out of the sawmill and logging end of things or reinvent the wheel and get back into it,” he adds, before motioning toward a board-and-batten-clad 3,600-square-foot building. “Obviously, the decision was made to get back into it.” 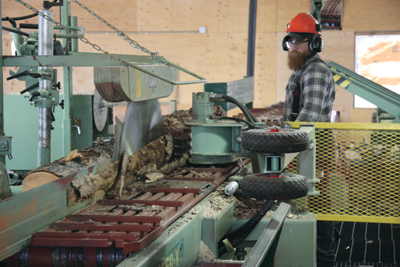 The structure barks out a conveyor’s belt worth of sawdust from Bowie’s brand-new Kara Master Y sawmill as he describes finding a suitable home for his new milling operation.

“I needed two things: ready access to the highway and ready access to the power line. Boy, was it a problem,” says Bowie, explaining how hard it was to find the right piece of land in an area that’s been mostly turned upside down by a century of gold mining. He eventually found the perfect spot, on a reclaimed waste-metal dump a few kilometres up the Klondike River valley from his retail lumber yard.

“It was supposedly contaminated because it was an old garbage dump,” he says, “but we put it to some constructive and productive use.” Once the site was prepared, Bowie had cleared a major hurdle and was able to move to the next phase of revitalizing his business: setting up his new mill.

“Relative to our old mill, which was a similar-sized conventional circular head rig, this mill will be faster,” says Bowie, “and simply more accurate. We’ll get better recovery out of the logs.”

Much of the peripheral equipment that flanks the new Kara mill was moved over from Bowie’s old operation. “The firewood processor that cuts slabs into stove lengths was built by North American Machinery in Killaloe, Ontario about 20 years ago,” says Bowie. “We have an old Sherman (USNR) edger that we’ve reconditioned and inserted into the production line. It’s probably older than you are,” he adds, with a chuckle. “But it’s an old brute of a machine and it’ll do the job for us.”

Much of the mill’s material-handling gear was fabricated from used equipment purchased in Edmonton and subsequently “cannibalized and reconfigured to do the job.” Bowie also lists an impressive inventory of items that were manufactured on site: “The log deck; the chain deck that takes the log into the mill; the green chain that takes the lumber away; and some conveyor belts and sawdust blowers.

“We just had to cut it apart and reconfigure all the pieces to make it work,” says Bowie, “and we’re still cutting and fitting to get it right. Eventually we’ll have it.”

The new setup is a vast improvement over the mid-70s model Bowie used up until this year, with perhaps the biggest improvement being the ease with which one person can operate the mill.

“Say I have a small order to run off and the mill was shut down,” explains Bowie, “I can start up and run with one man without having to put on running shoes and run all over the place. I can stand there and cut up a deck full of logs.”

Bowie also points to the Kara mill’s simple, non-computerized setup as a definite advantage in this remote northern community, a mere 266 kilometres south of the Arctic Circle.

“It’s pretty basic stuff. There’s nothing mysterious about it,” says Bowie. “We intentionally bought equipment we would be able to maintain ourselves.” Bowie admits to running into a few problems since the mill has been online, but he chalks most issues up to the frustrations inherent in learning the movements of a new machine and him “doing the engineering and designing on the back of a cigarette package.”

As a result, Bowie hasn’t realized an increase in output quite yet, and the mill was only operating at 50 per cent capacity in June 08 while various bugs are excised and modifications made.

“When we’re up to production we’ll be putting out about 10,000 board feet in an eight-hour shift,” says Bowie. He expects the maximum mill flow rate to be around 2,000,000 board feet annually, although he admits the short-term goal is “to get slightly above a million board feet a year.” Even still, this represents a substantial increase from the 750,000 board feet Bowie coaxed from his old mill each season.

The increased production will fuel Bowie’s expansion outside of Dawson City’s boundaries.

“The market in Dawson is very restricted, no opportunity to grow at all” he says of the pocket-sized community of 1,800. Bowie recently opened another lumber yard in the territory’s capital that he plans to keep stocked with products he produces in the Klondike.

“In Whitehorse, we’re in a much bigger market,” says Bowie, “and essentially gain access to the whole Yukon.”

Bowie also purchased a few industrial-grade heat exchangers he hopes down the road will give him the
ability to expand his line of specialty wood products.

“I’ll be able to plumb them in to one of those little wood-fired boilers and make a rudimentary dry kiln,” says Bowie. “We’ll be able to get into the siding market and [produce] finished product where we can get a much better price for the wood.”

Bowie has looked even further into the future to a time when his new mill satisfies some of his community’s energy needs.

“As with all sawmills there’s a pretty significant portion of the wood that we harvest that doesn’t make lumber,” says Bowie. “The logical opportunity for us to deal with sawdust and shavings is in the energy side of the equation particularly with the way fuel prices are going.”

One idea that Bowie has is to use his sawdust and excess wood to heat the town’s subterranean water lines that snake through the permafrost, in winter, and valve that same heat over to the local swimming pool, in summer.

“The only thing that exists right now is the opportunity,” says Bowie. “There are boiler systems on the market that will burn that sort of stuff in small- to medium-sized applications. It’s certainly within the realm of
reality.”

Converting waste-wood material to energy is still a ways off for Bowie. Nearer the horizon is christening his new mill and perhaps giving it a name (“Maybe George. I haven’t decided yet.”), and dealing with the remnants of the old mill that was once the backbone of his business, but now sits alone in the bare, saw-dust covered field just north of his office.

“The frame underneath [the old mill] was originally the gangplank of the number three dredge,” says Bowie, referring to the floating hulks that mined much of the Yukon’s gold. “We’ve been speaking to Parks Canada and we understand they need a gangplank for [National Historic Site] number four dredge.

“Number three was its twin,” he adds with pride, as if talking about an old, loyal hound, “so, it might be going back to its home.”